Unemployment and underemployment are widespread, although exact figures are missing. Most Eritreans live in self-catering rural areas. The shortage of trained staff is great. Trade union rights are heavily circumscribed.

The war against Ethiopia in 1998–2000 destroyed much of industry and agriculture. As a result, many people lost their livelihoods and the economy has had a hard time recovering.

Many Eritreans of working age devote years to military or other national service (see Current Policy) and are thus excluded from both education and the labor market. The government’s attempt to attract the many Eritreans – often highly educated – who live abroad has not succeeded. Instead, a steady stream of people flee the country, many of them young (see Population and Languages).

Trade unions are allowed, but their activities are severely restricted by the authorities. Employees in the military, the police and the state administration must not organize. The only national organization, the National Confederation of Eritrean Workers (NCEW), is closely linked to the state-carrying party PFDJ. 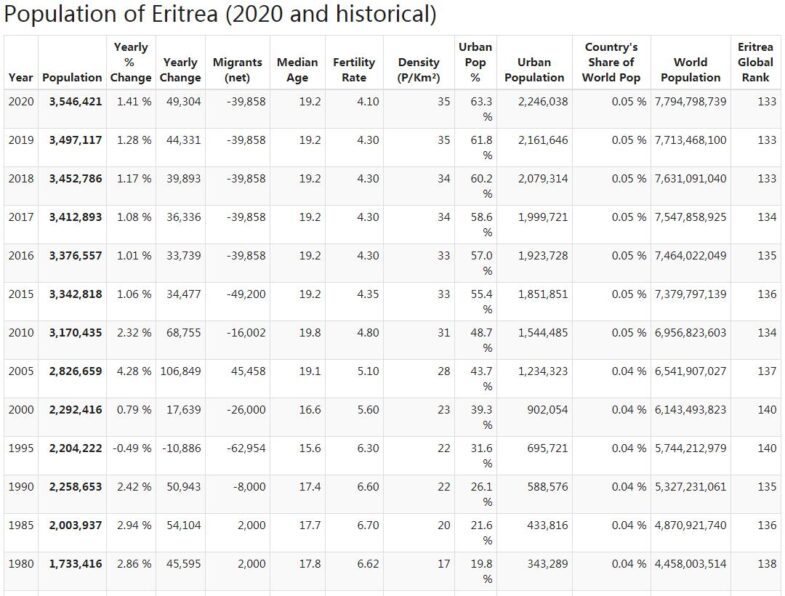 There are rules for working life and the working environment, and minimum wages are applied. Forced labor is prohibited, but the long military service is described by some human rights groups as a kind of forced labor.

In a situation where the peace process between Ethiopia and Eritrea is considered to have stopped, President Afwerki makes a two-day visit to Ethiopia and then promises to increase cooperation between neighboring countries. The work to complete the border crossing and to re-open the border crossings has slowed down. The last two leaders met was in July 2019.

Authorities take control of seven middle schools run by Christian or Muslim communities. Among other things, several schools run by the Catholic Church are affected. The authorities stress that the closures are in line with a 1995 decision to limit religious communities’ ability to run schools. In June 2019, the authorities took over all health clinics run by the Catholic Church, which meant that thousands of patients were left without care. Assessors believe the measures are a consequence of the Catholic Church criticizing President Afwerki and calling for political reform.

Hard oppression despite the peace agreement

The human rights situation in Eritrea has not improved in the year since the peace treaty was signed with Ethiopia, according to Daniela Kravetz, the UN Special Rapporteur on the human rights situation in Eritrea. Human rights violations are still common and the regime does not tolerate dissent. Religious groups are particularly vulnerable. More recently, the regime has broken up Christian prayer meetings and seized medical equipment at clinics run by the Catholic Church. Hundreds of Eritreans fly abroad each month.