The labor market in Equatorial Guinea consists of a formal sector with employees primarily in the oil and construction industry and civil servants. In addition, there is a large informal sector, where most live from self-catering agriculture.

The oil boom of the mid-1990s has led to some immigration of educated labor from countries such as the United States, Britain, Pakistan, India, Lebanon and South Africa, which has created a lot of tension with the locals.

There is a law that gives workers the right to organize themselves, but it does not work in practice. Several attempts to form trade unions have been jeopardized by the authorities. It is true that there is a trade union organization run by the Ministry of Labor, but no union activity has ever been seen. 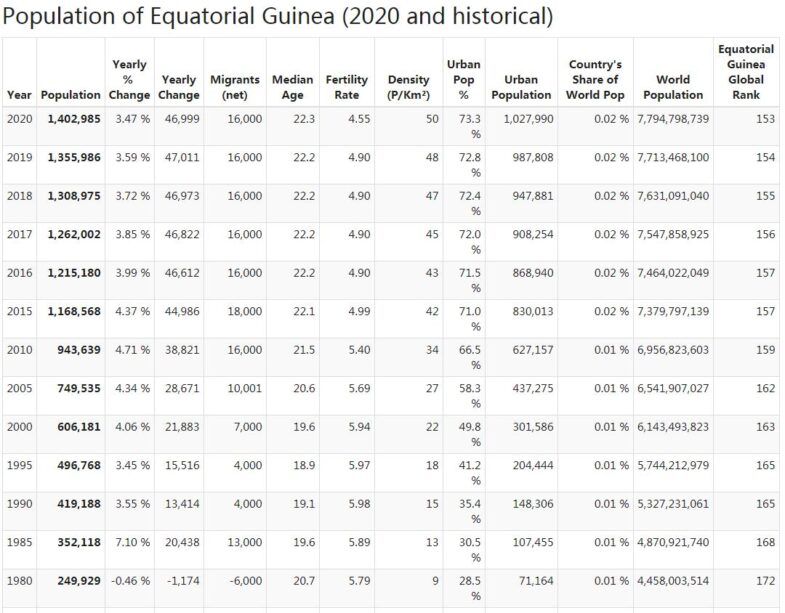 The political opposition, which is allowed in the country after external pressure (see Political system), has a program for trade union activities. Child labor is prohibited but still exists, and human rights organizations have reported that prisoners are used, for example, in forced labor in mines and on plantations.

Over 130 are sentenced for coup attempt

More than 130 people are sentenced for participation in what according to the regime was a coup attempt in December 2017 (see January 2018). Imprisonment of between 3 and 96 years is awarded by the court in Bata. Several of the convicted are foreign nationals, from Chad, the Central African Republic, Cameroon and France, who are sentenced in their absence. Three Equatorial Guinean regime critics in exile in Spain are sentenced to 96 years in prison each for planning and organizing the coup attempt.

Trials against coup suspects are set

The trials against just over 150 suspected coup makers are prematurely suspended after going on for ten days. Defense attorneys say they have not received any information on why the litigation is being suspended. The defendants are accused of participating in a coup attempt that according to the government should have been revealed in December 2017. Some are charged with treason and risk the death penalty. Others may be sentenced to long prison terms if convicted of terrorism or illegal weapons possession.