Unemployment is low in El Salvador, but a majority of residents are outside the formal labor market. Freedom of association prevails, but the proportion of union members is low.

Among those counted in the formal workforce, unemployment has remained below 5 percent throughout the 2010s. However, more than 60 percent of Salvadorans are employed in the informal sector of the economy. A large proportion are underemployed.

Conditions for workers and trade unions are difficult, not least at the export-oriented assembly plants, maquilas, where the majority of the employees are young women. They have low wages, long working days, insecure employment and are often subjected to sexual harassment by supervisors. Those who engage in trade unionism risk being dismissed and blacklisted.

The unions have close ties to the political left. Public employees were previously not entitled to form trade unions, but this has been allowed since 2009. Despite this, only a few percent of all employees are members of trade unions.

The right to strike includes all employees except police, military, judges and some other senior public servants. To call for a legal strike, at least 51 percent of employees in a workplace must support the strike. Employees may only strike if the requirements apply to collective agreements or protection of the employees’ professional interests, and before the strike is announced, they must try to reach a solution through negotiation. 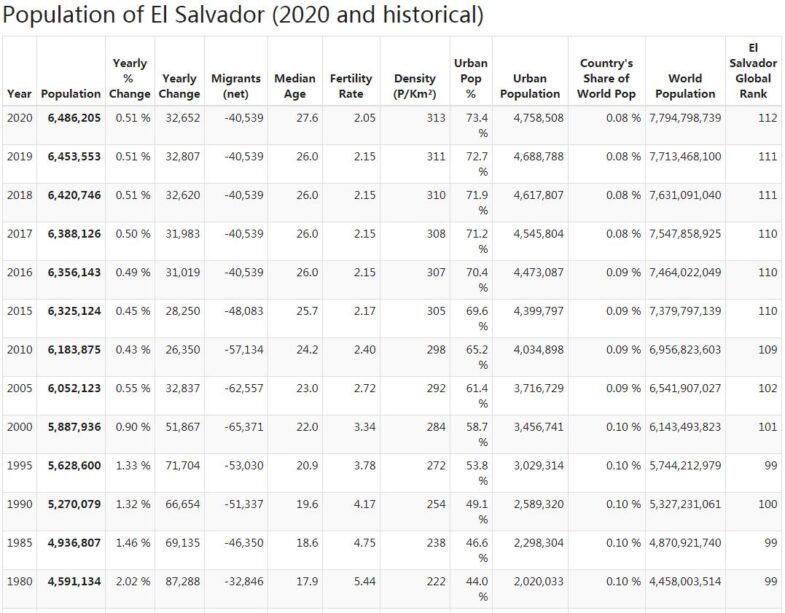 Child labor is widespread, especially in agriculture, but children also work in homes, with sales and more.

Respit for exile Salvadorans in the United States

The US government extends a residence permit that would have expired in January 2020 for around 190,000 Salvadoran residents of the United States (see January 2018). Those affected by the message may now stay at least until January 2021, or possibly another year. It is unclear if they are granted their special protection status (TPS) or if it is just a work permit.

Migrant agreement with the United States

An agreement is signed with the US government to prevent migrants from entering the United States. The agreement that El Salvador is a “safe third country” means that asylum seekers who cross El Salvador on their way to the United States can be sent back there by US authorities. The agreement must be ratified before it can take effect. The US has signed a similar agreement with Guatemala and is expected to conclude one with Honduras shortly. Critics do not believe that any of the three countries can be considered safe.

Former President Antonio Saca is sentenced to a further two years in prison, in addition to the ten-year sentence he is already serving (see September 2018). Saca has pleaded guilty to paying $ 10,000 to share information in another lawsuit against him.

Bukele takes over as president

37-year-old Nayib Bukele swears oath and takes over as El Salvador’s president. He has promised a “new era” for El Salvador and wants to fight corruption and violent crime.

Prosecutors seize 61 properties reportedly linked to the widespread corruption target against former President Mauricio Funes (see June 2018). These are stores, offices, luxury homes and a ranch, with a total value of over $ 24 million. The properties are written by Fune’s relatives, friends and former employees. The ex-president himself writes on Twitter, from his exile in Nicaragua, that the assets are not his and have nothing to do with him. In 2018, another 24 properties were seized and said to be linked to Funes.

The police strike a gang

Police say they have given the criminal gang MS-13 a “hard hit” by arresting 117 of its members, suspected of murder, blackmail and other crimes. The arrested are to belong to eleven different MS-13 cells, all operating in San Salvador. The arrest can be seen in light of US President Donald Trump’s recurring threat of withholding aid unless El Salvador and other Central American countries do more to keep the gang in check.

US aid is withdrawn

The United States announces that aid for El Salvador, as well as Guatemala and Honduras, for 2017 and 2018 will be fully withdrawn, according to an order from President Trump. It’s unclear how much money is involved, but Trump himself has spoken of $ 500 million. Trump is accusing the three Central American states of not doing anything to stop the widespread migration to the United States.

Victory for Nayib Bukele in the presidential election

Ghana’s candidate Nayib Bukele announces victory in the first round of the presidential election, with 53 percent of the vote. Arenas Carlos Calleja gets just under 32 percent and FMLN’s Hugo Martínez 14 percent. The two opposing candidates admit to being defeated. The 37-year-old Bukele himself belonged to the FMLN when he was elected mayor, first in Nuevo Cuscatlán in 2012 and then in the capital San Salvador in 2015. But 2017 he was excluded from the party after allegations of causing internal divisions. After trying to stand in the presidential election for two other parties (which, however, was stopped by the electoral authority), Bukele ended up in a “comfort marriage” with Gana, a center-right party formed by defectors from the Arena. Bukele did not mention Ghana in his victory and the party leader was not present when he held it.