About a quarter of Ecuador’s labor force is found in agriculture, just under one fifth in industry and the rest in the service sector. The official unemployment rate is low, but a majority support themselves outside the formal economy.

About two out of three Ecuadorians get their living in the informal sector. Employment is high. One reason why the percentage of unemployed is not greater is that many Ecuadorians apply abroad to get work.

Only a small minority of employees are union members and the number of union members also seems to be decreasing. Government officials and public servants are not allowed to form trade unions, nor those who work in companies with fewer than 30 employees (in practice more than half of all companies). There are also a number of restrictions on the right to strike. The largest trade union is the Workers United Front (Frente Unitario de Trabajadores, FUT), which brings together the country’s four central organizations. 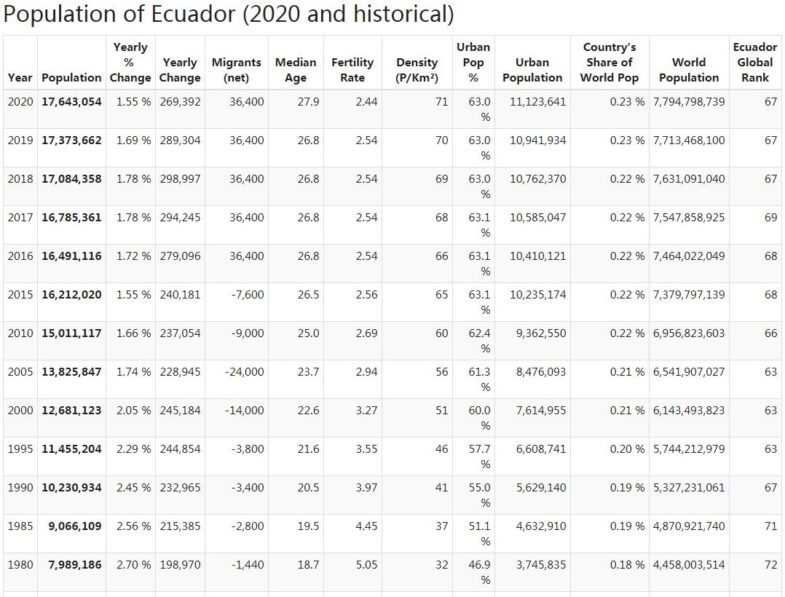 There are laws that regulate working hours (a working week may not exceed 40 hours), guaranteed minimum wages with an annual list and minimum age for an employment (15 years). Nevertheless, a large proportion of the population, not least urinals and children on the plantations, work under poor conditions for very low wages, as resources are lacking to ensure compliance with labor laws. The wage differences between different ethnic groups as well as between women and men are large. Women generally receive about 65 percent of what men earn for the same work.

The Vice President is sentenced to prison

Vice President Jorge Glas is sentenced to six years in prison for corruption. Glass is the highest-ranking politician to date sentenced in Latin America in connection with the huge fortunes surrounding Brazilian construction giant Odebrecht. According to prosecutors, he has received $ 13.5 million in bribes through his uncle, Ricardo Rivera. In exchange, Odebrecht received benefits in connection with public procurement of construction contracts (see also August and October 2017). The uncle and three others are also sentenced to six years in prison. The sentence for Glas on six years in prison is set by the country’s highest court in October 2019.

Split about the party leader post in the government party

The big divide in the AP party becomes clear when the party leader appoints former Defense Minister Ricardo Patiño as new party leader, instead of Moreno. The president is accused of not following the party’s line. His supporters say they do not approve of the decision and the following day a Quito court ruled that it was not legal, after which Moreno is reinstated. The president is said to have the support of over 40 of the AP’s 74 members of the National Assembly, including President José Serrano. The party leadership, on the other hand, believes that Moreno has failed the “citizen revolution” and calls on former President Correa to return from Belgium, where he moved with his Belgian wife, to lead a restructuring of the party. The schism within the party is bad for both opportunities to get the budget for 2018 adopted.

The Vice President is arrested

Vice President Jorge Glas is being detained at the police pending a criminal investigation (see August 2017). The Supreme Court also decides that Glas’s bank accounts and other financial assets should be frozen. Odebrecht has acknowledged that the company has paid out a total of $ 788 million in bribes in twelve different countries in exchange for lucrative contracts. The construction giant, which is being investigated by the US Department of Justice, has agreed to pay a record $ 3.5 billion in fines.

The Vice President is deprived of prosecution immunity

The National Assembly votes unanimously to repeal Vice President Jorge Glas’s prosecution immunity and allow a criminal investigation against him. Glass is suspected of links to this about the Brazilian conglomerate Odebrecht, a huge corruption scandal with ramifications in several Latin American countries. President José Serrano said in a statement that the decision gives Glas a chance to defend himself in court instead of being hanged in the media and subjected to “political lynching”. Nine people have been arrested in Ecuador in connection with the Odebrecht hut, including former Minister of Electricity Alecksey Mosquera.

The Vice President is deprived of all assignments

President Lenín Moreno, via a decree, revokes all assignments from Vice President Jorge Glas, since he published a long list of criticisms of the President. Glass has, among other things, accused Moreno of having handed over control of state media to “representatives of private media” and to handle financial data in a “perverse way”. Moreno and Glas have been increasingly confronted with the poor economic situation in the country. For a time, corruption charges have also been brought against Glas, who was also Vice President under Rafael Correa. After Moreno’s decree, Glas announces that he intends to remain as vice president and he is supported by Correa, who has become an increasingly outspoken critic of his successor.

Moreno takes over as president

Lenín Moreno swears the oath as president. Upon his entry, he strikes a conciliatory tone and talks about a six-point welfare program that will secure citizens “from the cradle to the grave”. Moreno presents a lost government. He retains some of the representatives of Rafael Correa’s ministers and others from the ruling party Alianza País, but also appoints some technocrats and representatives of the social sector, as well as an opposition politician. Moreno also states that he will not appear every week on TV, as the representative.

Media gets fined for missing reports

Four leading newspapers and three broadcasters are fined for failing to reproduce information that, according to the state media authority, was in the public interest. The information regarding opposition leader Guillermo Lasso’s business in offshore companies was published in March by an Argentine newspaper. The amount of the fine per media company is stated to correspond to ten journalists’ salaries.

According to the electoral authority, Lenín Moreno wins by 51 percent of the votes in the second round of the presidential election. He has already declared himself victorious before the official result was clearly announced. However, challenger Guillermo Lasso has questioned the numbers and calls for a recalculation of the votes. Lasso claims that election fraud has occurred.

The AP Party, which previously painted a picture of opposition candidate Guillermo Lasso as the candidate of the business elite, who would lose social programs for the poorest, has gone to accuse him of the banking crisis in 1999. In connection with the crisis, people got their bank accounts frozen and at least 200,000 Ecuadorians left the country. It has even been suggested that Lasso was directly responsible for the crisis, and that he hid large sums of money in tax havens. Immediately after the first round of elections, Lasso led the polls but his numbers have dropped and the week before the election, Moreno is in the lead.

The presidential election goes to the second round

Election day ends without major incidents, but the election result is delayed. Only after three days will the election authority announce that it will be a second round of elections. Lenín Moreno has received 39.3 percent of the vote, just below the 40 percent required for victory in the first round (and he has more than 10 percentage points more than the second, see Political system). Morenos is placed in the second round against Guillermo Lasso, who gained 28.1 percent in the first round. Cynthia Viteri, with 16.3 percent voter support, says she supports Lasso for the second round.