Economics and Business in Liberia

In the 1990s, a civil war suffered in Liberia, which caused the economic and social development of an already small developed country to be reversed, with great human losses and material destruction. Much of the economic life was affected, and well over half of the population had to flee their homes. Before the war broke out in 1989, Liberia was a country with major disparities within a two-tier economy: a layer that controlled the extraction of the country’s natural resources for export as well as government and public sectors, and a majority of the population that essentially subsisted on agriculture, far from natural household. At the 1980 military coup, the traditional political elite, the Americo-Liberians, were removed from power, and their economic influence was further weakened by the war, when much of the remaining economic activity was controlled by militia groups – most notably the rebel leader, and later President Charles Taylor and his National Patriotic Front of Liberia (NPLF). Most of the formal economic activity, such as the extraction of iron ore and the production of rubber, stopped as a result of the war. To the extent that normal economic activity took place in the first half of the 1990s, it was in those parts of the country that the NPFL had control of – and in particular the recovery of diamonds and gold, as well as timber harvesting, helped fund the war. 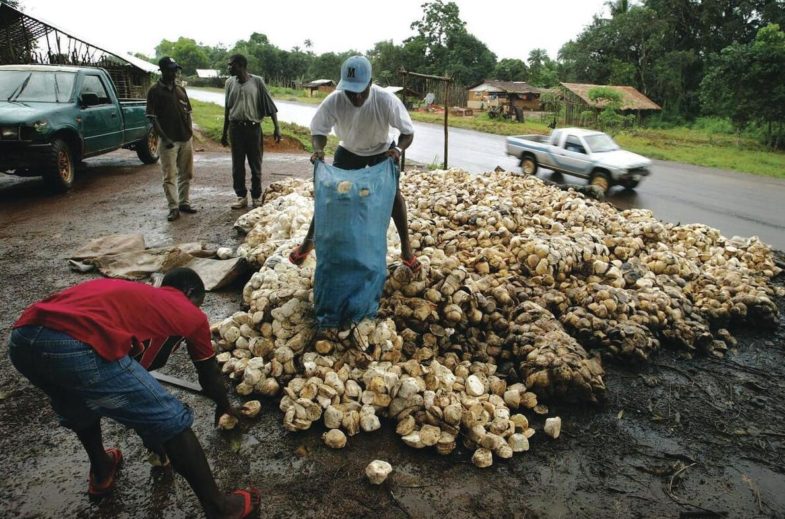 Workers unloaded recently harvested rubber on a plantation just outside the capital Monrovia. Rubber production has been of great importance to Liberia’s economy, but the country is now struggling with declining world market demand.

Liberia has significant natural resources, including of iron ore and timber, but it will require major investments to rehabilitate destroyed facilities and infrastructure. Liberia depends on both foreign aid, loans and credits, as well as investments to create economic growth and development. Even before the war, falling demand in the world market for the two most important export products, iron ore and rubber, led to stagnation in the economy.

Liberia has large deposits of iron ore that were mined in the Nimba Mountains in the northeast, in the Bong Mountains further south, and in the Bomi Hills at Monrovia. Production declined in the 1980s as a result of reduced world market demand and ceased as a result of the civil war. The country also has other ore deposits, i.a. of gold, bauxite and copper. Diamonds as well as barite and cyanite are also extracted. During the war, gold and diamonds in particular were mined and traded illegally, to finance the war. The UN banned 2001 diamond trade from Liberia.

Mapping of potential offshore oil deposits was done in the 1990s, with promising results. During the war, electricity production was greatly reduced and the infrastructure destroyed, after which electricity was generated substantially from privately owned diesel-powered generators.

Liberia has not developed any extensive industrial sector, and much of the business was destroyed during the war. The industry has largely consisted of small businesses, often with craftsmanship. An industrial zone has been established in the capital Monrovia with production of, among other things. textiles, footwear, plastics, mineral water and cement. The Norwegian company Scancem International has ownership interests in the Liberian cement producer Cemenco. There are also rubber processing plants. An oil refinery closed in 1982.

Liberia is primarily an agricultural country, and close to 70% of the working population worked in agriculture before the war. Most people use sweat farming on clearings in the rainforest and grow paddy, manioc and taro for their own use. Several agricultural projects encourage the cultivation of sum prices, but Liberia has not become self-sufficient with food grains. The most important crops grown for sale are rubber (rubber), coffee, cocoa and carbon nuts. However, production declined sharply during the war. because so many were driven from their homes. More than 50,000 workers were associated with the rubber plantations before the war; largest is the Firestone plantation, established in 1926. Business in this sector resumed in the second half of the 1990s.

Liberia has large rainforests containing considerable timber resources. The forests were underutilized before the war. By contrast, illegal logging and export of timber was extensive during the war, after which the UN imposed sanctions and exports ceased. Next to timber for export, the woods for the production of fuel are cut down.

Offshore fishing is underutilized, but craft fishing is conducted for local consumption.

Liberia could long point to solid surpluses in its foreign economy, to exports of – and revenues – from the export goods of iron ore and iron concentrate and rubber were reduced in the 1980s, and then ceased after the outbreak of the war. Throughout the 1980s, Liberia received substantial financial assistance from the United States, but at the same time raised loans and increased foreign debt which was built up in the 1970s.

The transport network is generally poorly developed and was not maintained or further developed during the war. Main roads run from Monrovia and inland, as well as along the coast. to the border with Sierra Leone. The railways were used for iron ore transport and owned by the mining companies. Parts of the network were opened for freight and passenger traffic in 2001. The road network is well developed in central areas, but very poor on the outskirts. In 1996 it consisted of approx. 10 800 km; only a fraction of fixed cover. International airport is Robertsfield near Monrovia, which was severely damaged during the war, and reopened in 1997. A smaller airport at Monrovia is Spriggs Payne.

Liberia has one of the world’s largest trading fleets, with many foreign shipowners taking advantage of the low registration fees, so-called convenience flags. The ships are not in Liberian ownership, and the Liberian authorities have little control over the business, which is controlled from an office in the United States. Liberia, on the other hand, has significant revenue from fees to the registry. Monrovia is a free port and was one of the most modern port cities in West Africa. During the war, the rebels used the port of Buchanan. 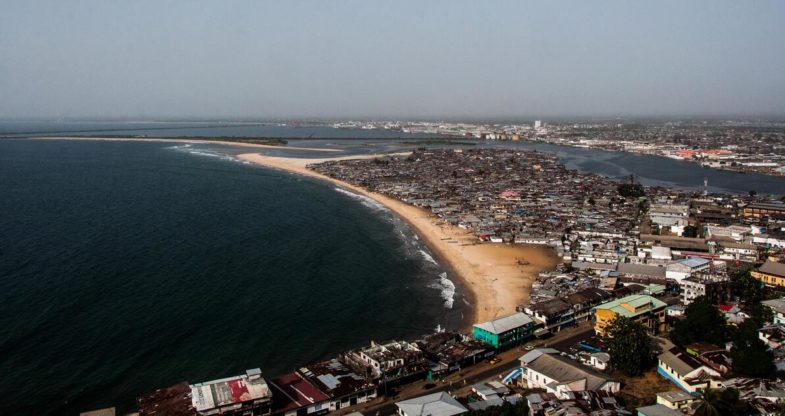 West Point is Monrovia’s largest slum with about 75,000 inhabitants. After the Civil War, many live in poverty.