High unemployment is a serious social and economic problem, especially among young people. In rural areas, the vast majority of East Timorans live on small-scale agriculture for housing needs.

In 1999, the UN Labor Organization (ILO) was given the task of establishing an authority for labor market issues in East Timor and introducing labor law and regulations for the working environment. The ILO has also helped develop small businesses and increase the employment rate.

Surveys show that up to 80 percent of the residents actually do not have paid work. A large number of rural residents are looking for cities in search of work. There, the unemployment rate is estimated to be at least 20 percent, among young people perhaps up to 40 percent. The country’s high Population growth means that between 12,000 and 15,000 new young people enter the labor market each year.

Official statistics indicate a significantly lower proportion of unemployed. This is because people who are severely unemployed (for example, work one hour a day) or have seasonal work are not counted as unemployed. Such statistics can indicate unemployment below 5 percent and do not give a correct picture of the situation. 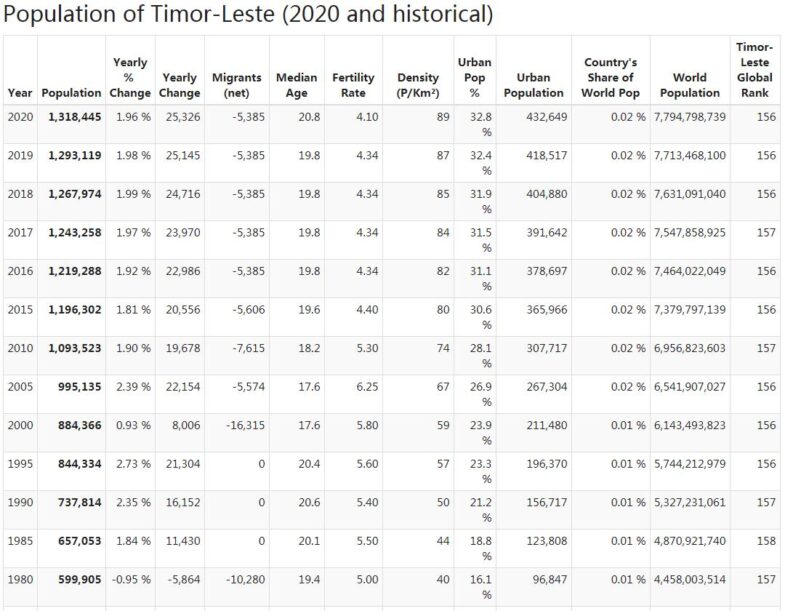 East Timorese labor law follows international practice. Discrimination is prohibited and trade union and strike rights are guaranteed in the constitution. A larger trade union organization, Konfederasaun Sindikatu Timor Leste (KSTL), was formed in 2001. With the assistance of the Australian trade union movement, it has developed into a strong and independent organization. There are also a number of trade unions for individual occupational groups, such as agricultural workers, construction workers, port workers, sailors, doctors and journalists.

The new Fretilin-led minority government’s political program for the next five years is being voted down for the second time by the CNRT opposition in Parliament (see also October 2017). This means that a government crisis is at hand because the government must step down if the political program is twice rejected by Parliament.

Government crisis when political program is voted down

The new Fretilian-led minority government’s political program for the next five years is voted down by the opposition in Parliament. The program contains health care reforms, investments in infrastructure and other costly initiatives. The CNRT-led opposition believes the program is unrealistic and is voting against it. The government’s setback leads to a crisis with unclear outcome, as the government must present a new proposal within 30 days. If this is also not approved by Parliament, the government must resign.

After two months of negotiations, the new parliament’s largest party, Fretilin, will form a minority government together with the small Democratic party. Mari Alkatiri from Fretilin is elected Prime Minister and Aurélio Guterres becomes Foreign Minister. The government is supported by 30 of the 65 members of Parliament. The opposition is CNRT, the People’s Liberation Party (PLP) and Khunto.

“Agreement on how to draw the sea border”

The Permanent Arbitration Tribunal in The Hague announces that East Timor and Australia have agreed on how the border in the Timor Sea should be drawn and how the oil and gas resources should be distributed. However, no details of the settlement are revealed as some minor stumbling blocks remain.

Fretilin’s attempt to form a majority government together with President Taur Matan Ruak’s party PLP fails. Fretilin invites the Democratic Party and Khunto to the negotiating table. Khunto also gets off the calls.

Gusmão resigns as leader of CNRT

CNRT’s decline in the July parliamentary elections leads to Gusmão leaving the post of party leader.

Evenly between CNRT and Fretilin in the election

In the parliamentary elections, the country’s two major parties are very even. Fretilin wins 29.7 percent of the vote and receives 23 of the 65 seats. This is a slightly better result than in the 2012 election. CNRT gets 29.5 percent and backs from 30 to 22 seats. Former President Taur Matan Ruak’s newly formed People’s Liberation Party (PLP) gets just over 10 percent of the vote, giving 8 seats, while the Democratic Party (DP) gets just under 10 percent and 7 seats. The new “youth-oriented” party Khunto wins 5 seats. There are no reports of electoral violence. The even result means that no party can govern on its own. Fretilin gets the president’s mission to start government negotiations.

The electoral law is being reformed

Parliament adopts a number of amendments to the electoral law, the most important of which is that a political party or party coalition must get at least 4 percent of the vote in a parliamentary election in order to take a seat in the legislative assembly. Previously, the barrier to Parliament was 3 percent. In addition, some of the independent electoral commission’s powers, including approving rules for the electoral procedure, pass to the government. The task of the Election Commission to approve candidates and party lists is transferred to the Supreme Court.

Fretiline leader Francisco “Lu-Olo” Guterres wins the presidential election in the first round with 57 percent of the vote. Of the seven other candidates, António da Conceição from the Democratic Party receives the most votes, just over 32 percent. The turnout is 71 percent. Guterre’s victory was expected since both Fretilin and CNRT had expressed their support for him. Guterres belongs to the political elite in East Timor and was a guerrilla soldier in Fretilin during the liberation war from Indonesia. He will take up the post of President on Independence Day on May 20. The fact that the two major parties end up behind the same candidate leads to the election campaign and the election day being calm with only occasional violence. Some analysts, however, warn that East Timor now in practice now lacks any real opposition.

President Taur Matan Ruak announces presidential elections until March 20, 2017. Any second round of elections will be held in April. The incumbent president has previously said he will not run for re-election. Planning Minister Gusmao, who has remained an influential politician even after resigning as prime minister and president, says a few days later that he supports Fretilin’s candidate Francisco Lu-Olo Guterres. Assessors interpret it as Gusmao emphasizing that the current close cooperation between Fretilin and CNRT will continue even after the parliamentary elections later that year. (20 + 23/1)

The sea boundary agreement shall expire

East Timor and Australian governments announce that the disputed agreement on the border crossing of the sea between countries will be terminated, at the request of East Timor. The agreement expires on April 10. The two countries say that negotiations on a new agreement will start in September of the same year. (9/1)