Unemployment and underemployment have long been high in the Dominican Republic. Women and young people in urban areas are at their worst. A large proportion of the workforce is found in the “informal” sector, ie black jobs such as street vendors and maids.

More than two of three Dominicans work in the service sector. Almost a fifth of the labor force is in industry, while just over 15 percent work in agriculture. Most new jobs have been created in the tourism industry, the financial world, local industries and the construction sector. At least 80 percent of a company’s employees must be Dominican citizens, with the exception of the management of foreign companies.

By law, eight hours of working day, 44 hours of work week, and the right to strike and the right to enter into collective agreements apply. But only about a tenth of the employees are unionized. Unions are weak and are often counteracted by employers. This is especially true in the free zones, where mainly low-paid young women work. Trade union leaders have been laid off, and in some free zones, employers have hired soldiers to hinder union operations.

For the first time in several decades, however, trade unions and employers managed to agree on relatively large monthly salary increases for employees in the free zones in the fall of 2017 (see Calendar). The agreement also included an agreement to revive a tripartite commission with the aim of improving the living conditions of the workers. 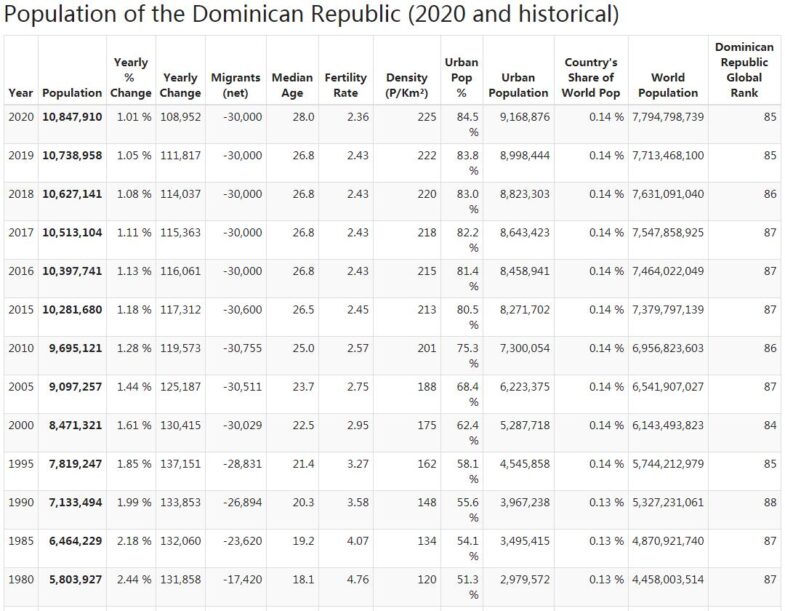 Worst are the conditions on the sugar fields, where many of the workers are paperless immigrants from Haiti. They lack all rights and often live under slave-like conditions. Most people do not have employment contracts and can be deported at any time (see Population and languages).

Child labor is widespread, especially in agriculture and the informal sector. Women are discriminated against in the labor market. Sexual harassment occurs and women who become pregnant risk being fired.

President Fernández launches a “democratic security plan” to curb increasing crime. Among other things, this means that the country will have more and better educated police officers.

Many deaths after riots

Violent riots are taking place between Dominicans and immigrant Haitians in the north of the country. Several Haitians are killed and thousands of illegal immigrants are sent back to Haiti.

New agreement with the IMF

A new agreement is signed with the International Monetary Fund (IMF). The loans will help the government to stabilize the economy and overcome the current electricity crisis.

500 people lose their lives when the country is hit by a tropical storm.

In the presidential election, Leonel Fernández, candidate for the Dominican Liberation Party (PLD), wins the first round of incumbent President Hipólito Mejía and his Dominican Revolutionary Party (PRD). Fernández gets 57 percent of the vote against 34 for Mejía.

At least seven people are killed and over 80 injured during a general strike in protest of economic policy and the constant power cuts.