Dominica, Republic and Island of the Caribbean about halfway between Guadeloupe in the north and Martinique in the south. Dominica has the west coast towards the Caribbean and the east coast towards the Atlantic. Make up one of the Little Antilles and is the northernmost in the Windward Islands. After under French and British rule, the country gained internal autonomy in 1967 and full independence in 1978. Dominica is one of the poorest countries in the Caribbean. The capital is Roseau.

Dominica (the name) means ‘Sunday’ in Spanish and was given by Columbus who discovered the island on a Sunday. 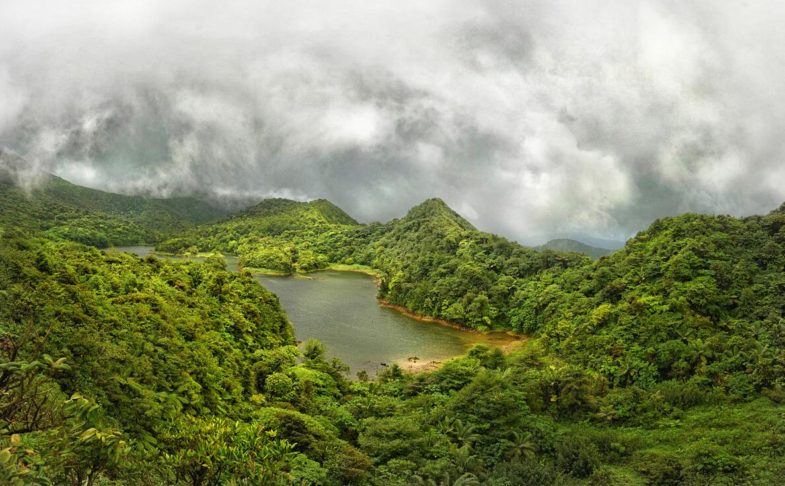 Almost the entire population is descended from African slaves. 86.8 per cent are Blacks and 8.9 per cent of mixed descent; whites make up 0.8 percent of the population. Most, 67 percent, live in Roseau and in coastal villages. About 2.9 percent are descendants of pre-Columbian Indians and live in a territory on the east coast. 6.7 percent of people over the age of 15 are illiterate.

English is the official language and is understood by all. Parts of the population speak the Creole language patois.

Roman Catholics make up 61.4 percent and Protestants 20.6 percent of the population. In addition, there are a number of small denominations, Rastafarians and Muslims.

Dominica is divided into 10 parishes. The Caribbean has limited local self-government.

There are no military forces. The Dominica Police Force has a Special Service unit and a boat unit. During a war or emergency, the police force can be used as a defense force. Dominica is part of the Regional Security System, which is a defense cooperation between 7 eastern Caribbean states.

Dominica is a member of, inter alia the United Nations and its specialized agencies, the World Trade Organization, World Health Organization, the Caribbean Community ( CARICOM ) and the Organization of East Caribbean States (OECs).

When Columbus arrived in Dominica in 1493, the island was populated by arawaker who was eventually displaced by caribou. The island was proclaimed a Spanish colony, but was taken over by French pirates in the 17th century. In the 18th century, control between the British and the French changed while most of the original population was killed or deported. Eventually, African slaves became the largest population.

In 1783, Dominica was recognized as a British colony. The island was administered in 1833-1940 with the Leeward Islands and was a member of the West Indian Federation from 1958-62. In 1967, Dominica gained inner self-government within the British Commonwealth.

Cyclones in 1979 and 1980 made about 70 percent of the population homeless. In 1980, Mary Eugenia Charles became the first female president. After several rebellions and a coup in 1983, Charles was re-elected in 1985 and 1990; she withdrew from politics in 1995. An economic crisis in 2002 paved the way for an aid agreement with China in 2004. Charles Savarin has been president since 2013.

About 40 per cent of the jobs are in the agricultural sector, and the economy is highly dependent on banana exports. By the way, coconuts and citrus fruits are grown. The sawmill is under development. Growing vegetables, livestock and fishing is mainly for local consumption. The modest industry is largely based on the processing of agricultural raw materials, and soap is also produced for export. Japan is the most important trading country.

More than half of the employed are employed in the service industries. Tourism is an important and growing part of the economy; In recent years, much has been invested in ecotourism. Tourism is suffering from a lack of an international airport and is mainly based on cruise ship visits.

It is 10-year compulsory school in Dominica; Obtaining sufficiently educated teachers is a problem. The country has a state college. In Portsmouth, medical education is provided.

There are two newspapers, a few radio stations and two national television stations.

Music and dance are important parts of Dominica’s culture. There are many traditional songs and dances. The internationally renowned group ‘Exile One’, founded in 1973, created the original genre ‘Cadence-lypso’ which paved the way for modern Creole music. The accordion genre ‘Jing ping’ is unique to Dominica. The country’s music is a fusion of Afro-Cuban, Haitian, African and European traditions.

Cricket is the most popular sport.