Denmark’s prehistory is the story of the time from the first people settled in the country up to the Viking age. 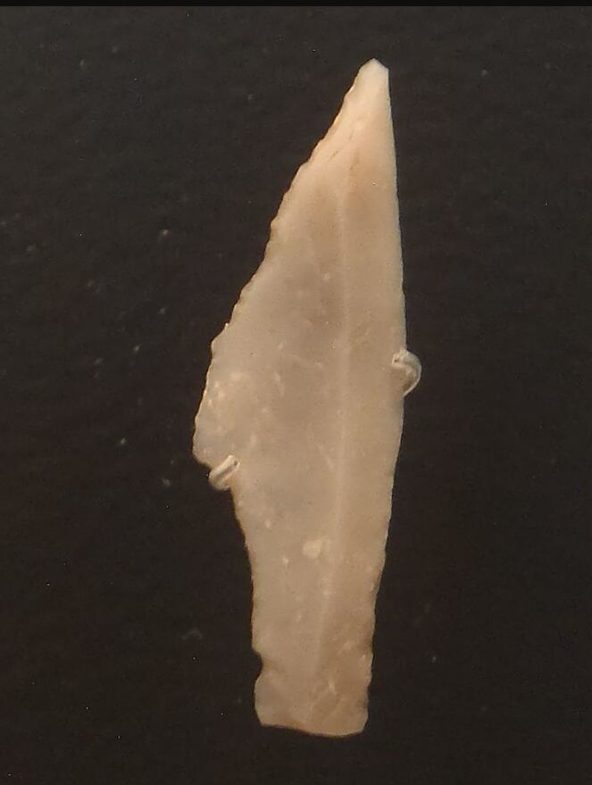 An arrowhead of flint from 12,500 BC. is Denmark’s oldest hunting gear.

As the masses of ice gradually withdrew from the Danish area around 13,000 BC, hunters who had been adapted to Arctic wildlife quickly followed suit. The oldest Stone Age settlements date from bed slasher and belong to an archaeological culture known as the Hamburg culture.

In the period approx. 9700–9000 BC performs a group called Lyngby/Bromme after known discovery sites. In boreal time the climate became warmer and drier. Birch and pine formed large forests, and wildlife changed. From this period, large settlements from the Maglemose culture, all inland, are known. The coastal settlements were now below the sea level. Bones, deer horns and stones have been found in the settlements.

The Royal Moslem culture replaced the Maglemose culture in the younger part of boreal time. The Kongemose people had a highly developed stone technology and were particularly skilled at beating regular flints of flint. In recent years, a burial ground has been discovered near a settlement from this period (see Vedbæk Boldbane). It shows a custom of burial where some people have received graves and where ocher has been used in connection with the grave itself and the dead.

In the middle of the Atlantic, the King Mosque culture is transformed into the Ertebølle culture, also called the kitchen meeting culture – the last name for characteristic coastal settlements. These consist essentially of large heaps of scallops, shells and bones. Occasionally there are fireplaces and in some cases burials. Possibly, people have lived in the midden. These large settlements may indicate that the people have become more settled. Hunting and retrieval have been the most important basis of life. In recent years, seasonal settlements have also been found inland. The antique material in the Ertebøl culture – especially the ceramics – shows that the people have been in contact with European cultural groups who have had an agricultural economy. 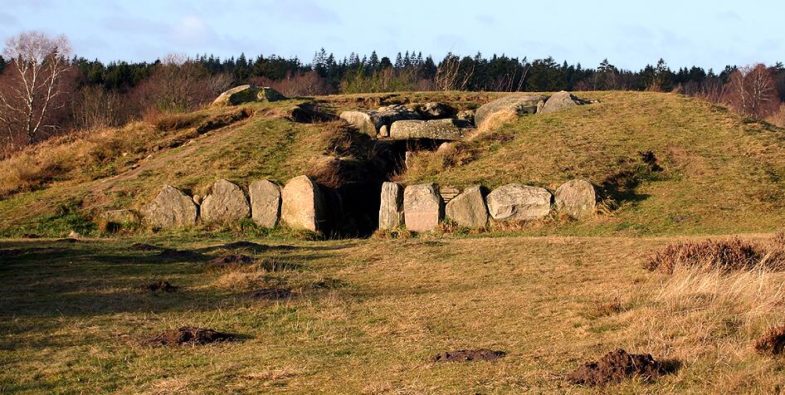 Younger Stone Age ( Neolithic time, c. 4000–1700 BC) marks the transition to an agricultural economy in Denmark with both livestock husbandry and grain cultivation. The first farmers have belonged to the funnel-beaker culture, which is named after the special pottery found on settlements and in graves.

While simple Neolithic tombs were common in the early Neolithic times, the tombstones, nozzles and trenches dominate the Middle Neolithic period. Flint axes and clay vessels have been deposited in marshes and water as sacrifices to the gods. From the Middle Neolithic period, there is another cultural group, the single-tomb culture, in which people have been buried individually, in contrast to the collective tombs of the funnel-bark culture. It is uncertain whether the single grave culture is the result of an immigration or whether a new burial practice is spreading.

The Late Neolithic ancient material has a more homogeneous character over large areas than was usual in the Stone Age. The most common tools are flint daggers and stone shaft holes. Items of copper, later also of bronze, were introduced to Denmark from the south. In the past, archaeologists assumed that humans during this period were essentially malnourished and had a labile settlement. Findings of house smells now seem to indicate a relatively stable settlement.

The Bronze Age is the time from around 1700 to 500 BC Around 1500 BC in Denmark they started to make bronze alloys of copper and tin themselves and to cast bronze objects. All raw material for the bronze production had to be imported, and this requires extensive trading activities. Large quantities of bronze objects have been found in Denmark, both in graves and from sacrificial and deposit finds. Both the bronze weapons and the magnificent bronze and gold jewelery awaken to this day. The finds from the Danish Bronze Age are among the most prominent in Europe from this period.

Older Bronze Age is characterized by large burial mounds. The dead man is buried unburied in the coffin with a rich personal equipment. In some cases, the coffin has been a hollowed oak trunk. From such tombs we have some of the most magnificent finds of ancient times (see oak coffin tombs). In the younger Bronze Age, the dead were burnt, and large tombs are rare. The engraving is often placed in an older mound or under flat ground.

Traces of bronze age house smells have been found since 1950. The houses have varied in size from 16–18 m in length up to over 30 m. Both variation in burial finds and in the size of the house smells indicate stratification of the community. Possibly the upper class has built its position of power on control of imports and the further distribution of the bronze. Sacrifices and carvings testify to belief in higher powers. Symbols found on both carvings and bronze objects indicate fertility cult.

Early Roman Iron Age is the time from 500 BC to around the age of 0. The transition to the Iron Age is marked by the fact that bronze was no longer used for weapons and implements and that the iron came into more general use, due to the fact that iron, based in ant ore, was now produced locally. The iron was manufactured in shaft kilns built over a pit in the ground, intended to receive slag from the blasting. There are numerous traces of ironmaking from various parts of Jutland.

The settlement tracks are in the form of long houses that have only exceptionally been more than 12-14 m long, often grouped together so that they form villages. The oldest known Danish villages are Grøntoft and Borremose. They burned their dead and buried the remains in an urn cut below flat ground. This burial custom represents a continuation of the burial customs of the younger Bronze Age. The sacrificial custom also indicates continuity from the previous period. Sacrifice of bronze women’s jewelry is particularly prominent in the oldest part of the period.

In the later part of the period, whole wagons, the Dejbjerg wagons, and imported bronze and silver boilers, such as the Gundestrup boiler, were sacrificed. Here, the influence of Celtic La Tène culture can be demonstrated. In the 300s, a war canoe was also filled with weapons and other army equipment sacrificed in the so-called Hjortspring discovery.

The Roman Iron Age (c. AD – ca. 400 AD) is one of the most exquisite periods in Danish prehistory. This applies to both finds, tombs and victims. The houses are of the longhouse type, but larger than the houses of the pre-Roman Iron Age. Most often the houses were two-parted with one part of the barn, while the people stayed in the other half. The houses have frequently been gathered in a village with paved paths and courtyards. There are in particular many grave finds in older Roman times – fewer in younger ones.

In addition to the old fire burial custom, it was common with unburied burial in the coffin, which is often cut deep into the underground. Such tombs can have an exceptionally rich burial ground with bronze and silver storage vessels and drinking vessels, glass jugs and jewelery (the Hoby and Himlingøy discovery). A regular trading venue has been found at Lundeborg on Funen.

Probably an extensive trade is the backdrop for the wealth that appears in the tomb equipment. The stationing of Roman troops along the border of the Roman Empire and the creation of cities has created a market for goods from the Nordic countries as well. Roman times have hardly been a quiet time. Several large ant finds indicate war conditions. Characteristic of these ant finds (see Torsbjerg, the Vimose find and the Illerup find) is the laying down of large quantities of weapons, personal items, clothing, cookware and tools – all in the equipment of an entire army. Many cases show traces of struggle, while others are intentionally destroyed. From written Roman sources we know that people in Gallia sacrificed his war booty to the gods by throwing it in water.

The Germanic Iron Age (ca. 400–800 AD) is divided into two main sections, the older and the younger German era, which corresponds to the Norwegian designations of people’s migration time and Merovingian period. The transition from Roman times to Germanic Iron Age is gradual. The biggest difference is a sharp decline in the number of settlements and burial finds. In contrast, the ant finds show a continuation from the previous period (see Nydam and Kragehulf discovery). Another feature is the closure of gold taxes. People have buried their treasures without being able to pick them up again. The Germanic animal style reached a high level during this period.

Younger Germanic Iron Age was previously considered the Iron Age’s most poor period. This is still true for the 7th century, but as for the 8th century, new discoveries and dendrochronological dating have changed the picture.

Not least, new dates of Danevirke for the year 737 have led to a changed view of the period. Danevirke is one of the largest defense facilities in Northern Europe and protected Denmark’s border to the south. Ribe on the west coast of Jutland, not far from Frisian territory, was built at about the time Danevirke was started, and is thus Scandinavia’s oldest city. The area is divided into parcels, a clear sign that an overall power has been behind the city establishment. Both the city foundation and the construction of Danevirke indicate that there has been a strong royal power in Jutland in the 700s.

The Viking Age is the period from around 800 to 1050. The archaeological material in the Viking Age represents a steady development of the material from the younger Germanic Iron Age. The settlement was partly on individual farms, but first and foremost in villages. One of the best-researched villages is Vorbasse in central Jutland. At Lindholm High along the Limfjord there has also been urban development that has covered approx. 2 hectares. Here is a large burial ground with a total of 650 graves that have been used in the period approx. 500-1000.

The city establishment that started in the younger Germanic Iron Age was continued. Written sources say that King Godfred moved merchants from Reric to Hedeby in 808. Soon after, the oldest coins in Scandinavia were struck here. Hedeby was provided with a defensive wall in the mid-900s, roughly at the same time as Aarhus was established. Aarhus was also surrounded by a semi-circular fortress swell.

The four large castles, Aggersborg, Fyrkat, Trelleborg and Nonnebakken, were all built around 980 and thus date from Harald Blåtann’s time. The useful life of the facilities has been short, and the castles can probably be linked to King Harald’s collection of land, mentioned on the large Jelling stone. It is also mentioned that he Christianized the Danes. Written sources report that Ansgar, the Nordic Apostle, made mission trips to Denmark and that he must have had a church built in Ribe, and that there must have been a bishop in Aarhus in 948, 965 and 988.

The Danes also made their mark in Europe. The outer expansion was mainly in the form of Viking trips aimed at Frisian, Frankish and Anglo-Saxon areas. Later, settlement establishment followed in both Normandy and England. The outer expansion culminated with the Danish king Knut the mighty conquest of England and a short-lived North Sea empire. Rune inscriptions are direct testimony to this, while tax finds, which include coins and valuables that have served as Danish debt, are more indirect testimonies.