Most of Denmark consists of deposits from the younger part of chalk, tertiary and quaternary. Only on Bornholm (which is geologically very similar to Skåne ) are bedrock rocks and, in small sunken areas on the southwest coast, also sediments from Cambrosilur and Mesozoic ( Jurassic and Cretaceous). Bornholm is part of the Tornqvistson which forms the southwest boundary of the Baltic bedrock shield.

Most of the rocks in Denmark are loose, and this leaves their mark on the flat landscape. The high ridges, Himmelbjerget and Møns Klint are formed by the glacier during the last ice age pushing the loose rocks together in piles and ridges. 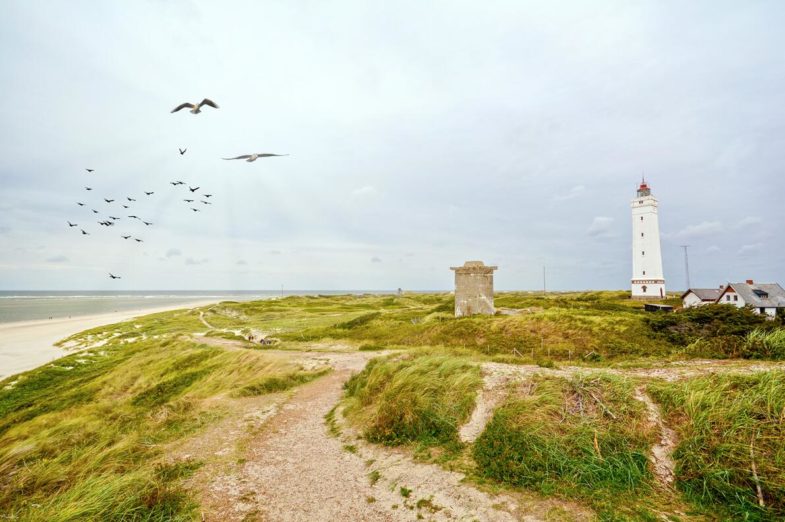 By drilling and geophysical investigations related to petroleum exploration in the North Sea, knowledge of Denmark’s deeper underground has been gained. There is a bedrock ridge, the Fyn – Ringkøbing ridge, in a south-easterly direction over the islands and Jutland and out into the North Sea. The back is covered by relatively thin deposits, down to 600 m thick, and has large, deep pools with sediments on both sides.

North of the ridge lies the Jewish or Danish-Norwegian basin with at least 6,000 meters thick sediment layer. The oldest sediments are located directly on the bedrock and are of Cambrian and Silurian age, and similar layers are found in Skåne and the Oslo field. Above these sediments are thick salt deposits from the Permian (Zechstein Sea). This salt layer has led to many diapir structures in Jutland and also includes potassium salts.

Above the salt layer are thick layers of sandstone and slate from Triassic, Jurassic and older chalk. There are good source and reservoir rocks, and it was a big disappointment when it turned out that the whole pool, despite its large thickness, was not “matured” so much that oil and gas formed. Above sandstone and slate layers lie a layer of chalk rocks up to 1000 meters thick from the Chalk and the oldest parts of the Tertiary period (Dani). At the top lies clay and sand from tertiary and quaternary deposits. To the northeast the basin becomes shallower, farthest to the north (at Skagen) the bedrock is only about 1500 meters below the surface and covered by chalk rocks.

The Funen – Ringkøbing ridge has since the beginning of carbon formed the divide between the pools in the north and south, and the continuation of the ridge forms the distinction between the northern and southern parts of the North Sea. The southern pool is thicker than the northern one and is a natural part of what one finds in northern Germany. Here you find some small gas deposits and traces of oil. The Danish petroleum deposits in the North Sea are located in the continuation of this basin or in the reef in the middle of the North Sea, furthest west of the Danish sector.

Layers from the oldest part of the Paleozoic are very few in Denmark, and the small ones are very similar to those found in Skåne and in the Oslo field. Provisions from the Devonian missing entirely, and deposits of carbon are found only in the southern basin. In the perm, Denmark, like the rest of the North Sea area, was covered by the Zechstein Sea which was divided by the Funen – Ringkøbing ridge. In Trias, Jurassic and Lower Cretaceous, the relationship between relatively shallow seas and low land alternated with rivers and lakes. In Trias, the climate was dry and warm, while in Jurassic and Lower Cretaceous it was humid and warm.

In the youngest part of Cretaceous and in the oldest part of the tertiary (Dani), the land was covered by a warm, relatively deep sea where lime sludge (chalk) was deposited without any special supply of sediments from the surrounding areas. In the older part of the tertiary (paleocene and eocene), marine clays were deposited suggesting calm conditions and slow sedimentation. Later, in the oligocene and especially in the Miocene, there was faster sedimentation and coarser sediments, while at times the land rose above the sea. This was linked to the opening of the Atlantic and the uplift in Norway that was going on at this time. In the latter part of the tertiary (pliocene) most of Denmark was above sea level, and deposits from the pliocene are found only in the southwest corner of the country.

From the quarters, little is known about the very oldest icings, because they were relatively small and the tracks were removed by later ice ages. On the other hand, you are well acquainted with both the last and the last ice age and the last two interglacial times. During the penultimate ice age, all of Denmark was covered by glaciers, while the western part of Jutland was ice-free during the last ice age. From the last interglacial era, there are known traces of people in Denmark, the earliest discoveries from the Nordic countries.

The bedrock on Bornholm is built of solid rock. In the northern 2 / 3 of the island is the bedrock, especially granites giving rocky coast and a pronounced burst Dalland cabinets. In the south of the island there are layers from younger times that are partly covered by loose material from the ice ages, which gives smoother surface shapes and partly low sandy coast.