The unions in southern Cyprus have traditionally held a strong position. The Turkish Cypriot part of the island has long been hit by high unemployment, while the Greek Cypriots have had easy jobs. However, during the economic crisis during the first half of the 2010s, unemployment also rose in the south. Only towards the end of the decade did the situation improve.

Southern Cyprus was already affected by the global financial crisis in 2008, which was also reflected in employment in the labor market. During the economic crisis years between 2011 and 2015, unemployment rose further (see Finance). Trade unions strongly opposed the government’s demands for frozen salaries and increased retirement age to reduce the state’s budget deficit. Towards the end of the decade, the situation brightened and since then unemployment has fallen. At the beginning of 2020, the official unemployment rate was the lowest since 2009 according to the statistics authority. 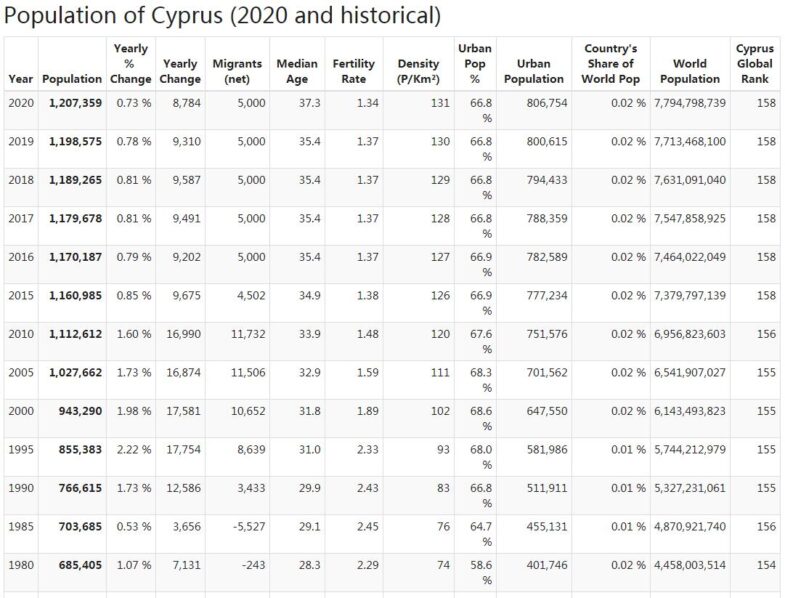 The vast majority of Greek Cypriot workers are unionized, while the proportion of Turkish Cypriots is relatively low.

Both Cypriot leaders agree to quickly resume peace talks after international pressure. They will meet again in Geneva on January 9 and two days later submit their detailed proposal for the demarcation of a future federation. An international conference will be launched on January 12, where the guarantee powers of Greece, Turkey and the United Kingdom will also participate and where other suitable parties can be invited if necessary, the UN announces as a mediator between Greek and Turkish Cypriots.

Negotiations are canceled and no new meeting date is set. The question of how many Greek Cypriots should be allowed to move back to northern Cyprus is described as the most difficult problem. Both sides say that the negotiations have not completely broken down but that they need to “think about the future”. The governments of Greece and Turkey also say they are eager to help.

An agreement to reunite Cyprus is within reach, says UN chief Ban Ki-moon as he begins a new round of negotiations at a luxury hotel in Switzerland.

The Cypriot leaders announce that the peace process will continue with concrete negotiations on land ownership and any territorial change. The negotiations will take place in Switzerland from November 7 and will begin in the presence of UN chief Ban Ki-moon.

UN chief Ban Ki-moon promises to take greater responsibility for the work of reuniting Cyprus. He hopes that a peace agreement will be ready before he leaves his UN mission on December 31.

Both Cypriot leaders Anastasiadis and Akıncı meet UN chief Ban Ki-moon in New York in an effort to conclude negotiations on the reunification of Cyprus with the UN’s help. Ban promises during the meeting to take greater responsibility for the work of a reunion.

Since the government of Turkey decided not to return to “normal time” in October as in previous years, Cyprus gets two time zones on the island. The Turkish part in the north follows the mainland’s decision and therefore ends an hour before the Greek part in the south during the winter season.

Split parliament after elections in the south

The Greek Cypriots elect a new parliament following an election campaign that was mostly about the importance of using as many people as possible to create a representative people assembly. Distrust of politicians is widespread following the economic crisis of recent years that has cost many ordinary Cypriots expensive, as well as a series of corruption scandals. Despite the politicians’ request to go and vote – which is formally also mandatory – turnout is a record 67 percent. The leading parties, Conservative Disy and Communist Akel, are both declining, from 20 to 18 seats and 19 to 16. respectively. votes. Elam supports the right-wing coup 1974, opposes a federal government with the Turkish Cypriots, and is close to the Greek neo-fascist party Golden Dawn. A total of eight parties will have a seat in Parliament.

Conservatives form government in the north

Turkish Cypriot President Akıncı commands UBP leader Hüseyin Özgürgün to form a new government. Since the UBP has only 18 of the 50 seats in Parliament, he must try to form a coalition. He is supported by the Democratic Party (DP) and independent members.

The Turkish Cypriot government falls after the right-wing UBP interrupted cooperation with the center-left party CTP after disagreement over financial issues. The financially pressured Turkish Cypriot outbreak state is completely dependent on Turkey’s support and has not been able to pay the salaries of civil servants in March. UBP does not want to agree that wages should be paid in installments. President Akıncı urges the party leaders to quickly form a new government so as not to damage the sensitive peace talks with the Greek Cypriots.

The emergency loan is canceled

The international rescue program for the Cypriot economy ends. Cyprus has recovered from the acute crisis and does not need to use the EUR 2.7 billion remaining of the total EUR 10 billion emergency loan approved by the EU, ECB and IMF in 2013.

The IMF gives the go-ahead to pay out an additional EUR 126.3 million of Cyprus’s total EUR 10 billion emergency loan. After a ninth review of the government’s economic reform program, the IMF gives good marks on how Cyprus has managed its finances and lifted out of the acute crisis. A tenth review remains.