The reforms that have been implemented over the last ten years have created major changes in the labor market. Previously, all Cubans through the state were guaranteed a job and an income, even though it was low. Now, the state has laid off hundreds of thousands of public employees at the same time as a new sector has emerged with self-employed and private employees.

The reform policy abolished the hitherto almost sacred principle of equal pay for all, regardless of work, and the state-owned enterprises were called upon to give skilled workers higher wages than others. President Raúl Castro also made clear that the large surplus of public sector workers would be eliminated. According to Castro’s plans, one million government employees would be laid off and unprofitable companies began to be closed down. The idea was that the small businesses that started to emerge as a result of the reforms would absorb the surplus from the public sector. Both sole proprietorships and private cooperatives were given the right to hire others.

According to official figures, 580,000 Cubans are now estimated to be employed in the private sector, and perhaps twice as many have indirect employment as subcontractors to self-employed persons. However, the development on the private side has not kept pace with the slimming of the public sector, which has therefore slowed down.

Almost a fifth of those with a job work in agriculture and an equal share in industry. The rest, just over 60 percent, are in the service sector (administration, education, healthcare, trade and tourism). 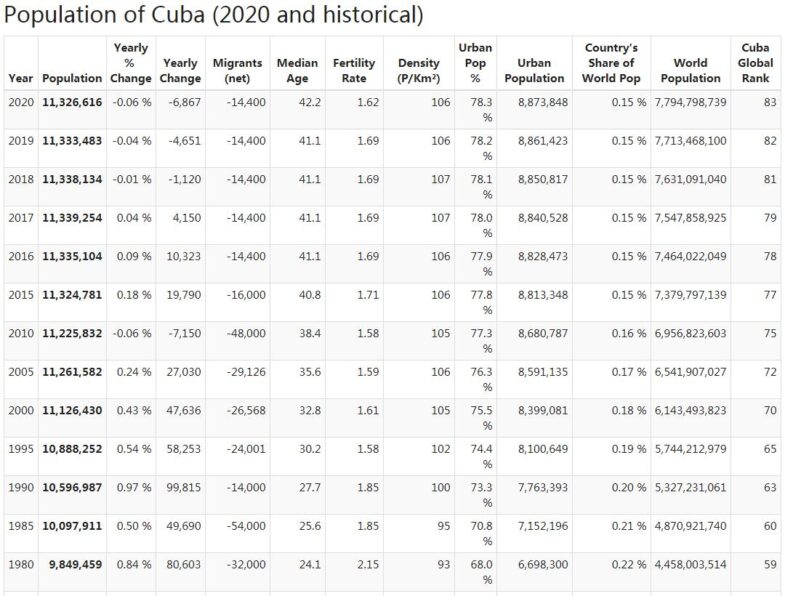 Around 3 percent are unemployed according to official data, while at the same time employment is high in the state sector, that is, the employees have too little to do. Many Cubans support themselves in whole or in part in the so-called informal sector of the economy.

Unions have a weak position. Strict law does not exist and in the state sector it is the state that determines wages and working conditions. The trade unions mainly deal with social issues.

Wages remain low. Although the principle of equal pay for all was abolished, there were no resources to implement any major wage increases. The average salary for government employees is around SEK 250 a month. A doctor earns a hundred bucks more than the average salary. Miners also belong to those who earn a little more than others. The hotel and restaurant industry formally has the lowest wages, but those employed in the tourism sector are often the country’s real high-income earners. Cleaners at hotels as well as restaurant employees can in a few days receive tips equivalent to a monthly salary. Private entrepreneurs also have the opportunity to earn much more than the average salary. The growing income gaps are worrying about the government that has now cut open the possibility of starting private companies (see Current policy).

Sources for this text: Europa World Plus, Bertelsmann Stiftung, Union to Union, AFP

The turnout will be lower than usual in the local elections held on October 21. Only just under 92 percent of voters cast their ballots compared to nearly 95 percent in the last election 2010. As with other elections, all candidates have been approved by the Communist Party.

Twelve people are sentenced to between four and twelve years in prison for corruption in connection with the expansion of a smelter for nickel and cobalt. Three of the defendants are former ministers. The charges are in line with President Raúl Castro’s speech that the fight against corruption is one of the government’s most important priorities.

The government is expanding the area that individual farmers can use on state-owned land to 67 hectares.

One of the country’s leading champions for democracy, Oswaldo Paya, is killed in a car accident. Paya’s family disputes the police report on how the accident happened and suspects that Paya, who received several death threats, has been cleared out of the way for political reasons.

The Pope visits Cuba. He criticizes the American trade embargo and at the same time urges the Cubans to “renew their society”.

Farmers are entitled to more land

Private and state agricultural cooperatives that use state land that has been in decline will be entitled to larger land areas than before (up to 165 hectares) and receive long-term contracts (up to 25 years). Farmers on state-owned land also have the right to erect houses on the land they dispose of, and to have it inherited from their children.

At a party conference, the decision taken at the party congress last year confirms that no one should be able to sit for more than two terms in a political post, but nothing is stated about when the reform will apply.

Prisoner dies as a result of hunger strike

Dissident Wilman Villar Mendoza dies after a hunger strike. Villar Mendoza had been arrested in late 2011 in connection with a human rights demonstration in the province of Oriente, and sentenced to four years in prison. He will be the second prisoner in two years to starve to death in protest against the regime (see February 2010).