Following the outbreak of the international financial crisis in 2008, the already high unemployment rate in Croatia rose. In a couple of years, the jobless rate was over 17 percent, and among young people it was 50 percent. The curve then turned again and unemployment is now just slightly above the EU average.

At the same time, the proportion of the population that is at all included in the labor force is relatively low. Especially among the elderly, over the age of 55, many are either working or registered as job seekers.

Another gloomy effect of the economic crisis was falling wages in 2010–2011. A large proportion of the jobs offered are time-limited.

The informal sector is expected to account for just over a quarter of work in Croatia and an equal share of the economy.

From 1 July 2013, the Croats as EU citizens have the opportunity to apply for jobs in other EU countries.

Two thirds of the jobs are in the service sector, where tourism accounts for a large proportion. 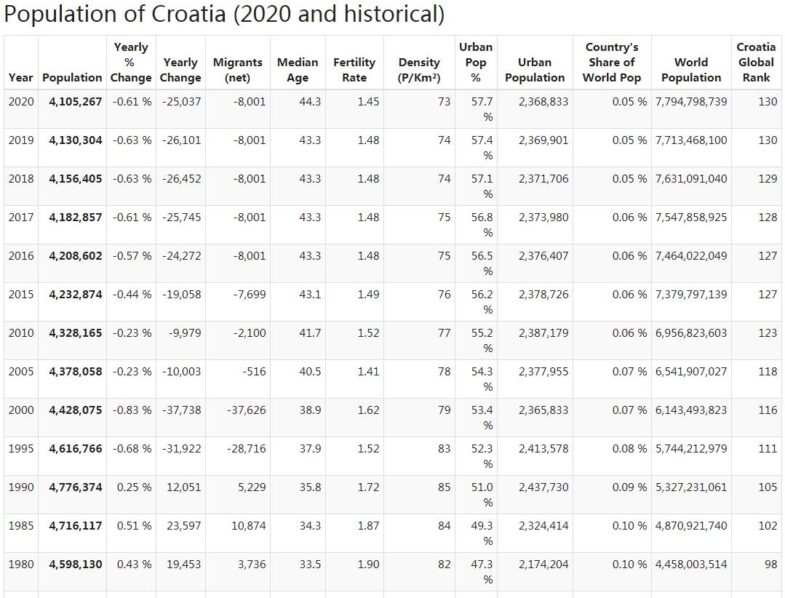 The right to strike and conclude collective agreements is to some extent limited. The proportion of union members is low. There are several different trade union organizations in Croatia, with different political orientations. HUS is the heir to the former communist union.

President Zoran Milanović announces that parliamentary elections will be held on July 5. It is a few months earlier than originally planned. The government coalition, with HDZ at the forefront, has a small majority in the outgoing parliament and opinion polls show that the coalition has good chances to strengthen its grip on power. The reason is that Prime Minister Andrej Plenković and his government colleagues are generally considered to have successfully handled the corona pandemic.

The Minister of Defense resigns

Defense Minister Damir Krstičević announces that he will resign immediately after a Croatian military plane crashed earlier in the day in connection with an exercise and two crew members were killed. It is the second fatal accident this year for Croatia’s air force. In January, two crewmen were killed when a helicopter crashed off the coast of the country.

Earthquake during the corona crisis

A series of earthquakes occur at the same time as Croatia and the rest of Europe try to deal with the emergency caused by the new coronavirus that causes covid-19. Dozens of people and many buildings are injured in the quake near Zagreb, and two hospitals have to be evacuated. Many people ventured into the streets of concern for continued shaking, despite restrictions being imposed to prevent the spread of infection. Prime Minister Andrej Plenković urges everyone to stay away from others. One of the quakes is said to have been the strongest in Croatia in 140 years.

Milanović takes over as president

Former Prime Minister Zoran Milanović swears the oath and succeeds Kolinda Grabar Grabar Kitarović as president. He reiterates his message from the electoral movement, saying that “the war is over,” with the aim of the electoral debate that came to be much about history, from the Second World War to the disintegration of Yugoslavia in the 1990s. Milanović also emphasizes the importance of distinguishing between patriotism and “crude nationalism”. He also talks about the fight against corruption in all respects, including attempts to darken the climate crisis.

The European Court of Justice does not handle border disputes

The European Court of Justice in Luxembourg states that it lacks jurisdiction over Croatia’s border dispute with Slovenia, and thus has no right or opportunity to decide the issue (see July 2018). Slovenia has accused Croatia of violating EU law by refusing to comply with the arbitration on the issue (see June 2017). Croatia’s Prime Minister Andrej Plenković tweeted that the court’s decision meant “a victory for Croatia’s argument”. Slovenian Foreign Minister Miro Cerar – who was prime minister at the time of the appeal to the European Court – accuses the court of “lacking courage” enough to act on the matter.

Former Prime Minister Zoran Milanović, Social Democrat, gets close to 53 percent of the vote in the second round of presidential elections, just over 47 percent for incumbent President Kolinda Grabar Kitarović. Milanović has been campaigning for a liberal democratic “normally Croatia” with strong support for the EU. Kitarović went to election in support of “real Croatia” with hints that the ruling right-wing nationalist HDZ is the only party that can represent the country. The result is ominous for HDZ ahead of the parliamentary elections to be held by December. The party is challenged from both left and right (see also December 2019).

For the first time since Croatia became an EU member in 2013, the country takes over the rotating presidency, under the slogan “A strong Europe in a challenging world”. Britain’s exit from the Union and enlargement with new members are priority issues, says Foreign Minister Goran Grlić Radman. The Presidency is held for six months by one EU member at a time and is managed in a “troika” where the current Presidency co-operates with the closest representative and successor, which in Croatia’s case is Finland and Romania.