For Latin American conditions, unemployment has been low in Costa Rica. However, it rose sharply after the global economic crisis of 2008–2009, from below 5 percent to over 10 percent, and it has remained close to that level ever since. Among young people, unemployment is more than twice as high.

Many who have jobs are also underemployed. The informal sector is smaller than in the region as a whole, but the proportion of the workforce that works “black” has also increased since the financial crisis, from around a third to up to half.

A majority of Costa Ricans work in the service sector. More than one in four jobs are estimated to be directly or indirectly linked to tourism. Agriculture employs 12 percent of Costa Ricans, while 19 percent work in industry.

Organizational law is guaranteed by law, although at least twelve people are required to form a trade union, which makes it impossible to organize in a small workplace. The right to strike is limited in certain sectors that are considered particularly important to society, such as at oil refineries and ports. Employers are obliged to negotiate collective agreements if at least one third of the workforce so requests. Three former national organizations joined forces in 1991 to form the Costa Rican Workers’ Confederation (Confederación de trabajadores rerum novarum, CTRN), which is affiliated with the IFS World Trade Union. 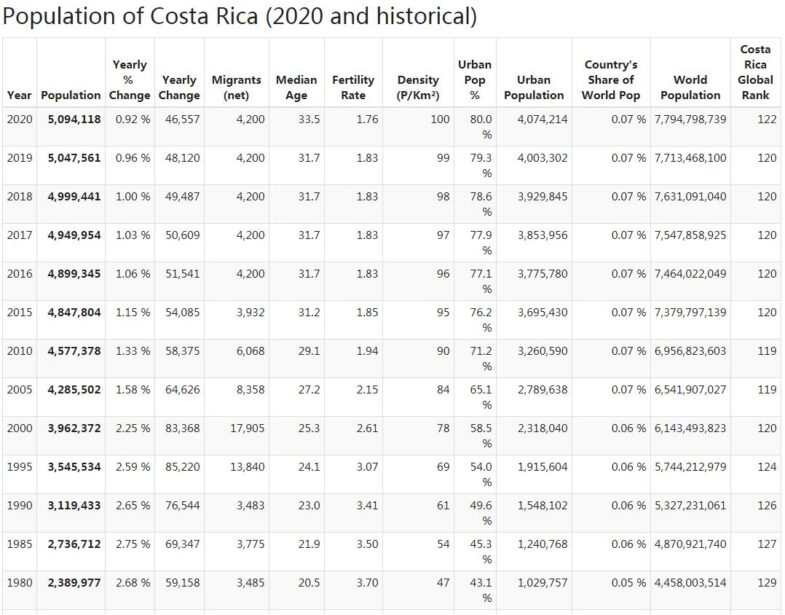 The work week is, according to law, a maximum of 48 hours long. In the service sector, the norm is 40 hours work week, Monday to Friday, while workers often also work half day on Saturdays. Two weeks’ paid vacation is a statutory minimum.

The crisis with the migrants results in Costa Rica breaking with the regional cooperation body Sica, due to lack of solidarity between the member states (see Foreign Policy and Defense). The authorities also announce that no more temporary visas will be issued for Cubans. A few days before the New Year, a settlement is reached within Sica, which means that Cubans will be flown to El Salvador and from there will be taken by bus to the United States.

Costa Rica gets right in the border dispute

The International Court gives Costa Rica the right to the disputed area of ​​the San Juan River, based on an agreement of 1858. Nicaragua receives criticism for violating Costa Rica’s right to use the river for transport (see March 2011).

President Luis Guillermo Solís visits Cuba, the first president since the resumption of diplomatic relations between the countries in 2009. The visit is given special weight in light of the ongoing crisis with the Cuban migrants in Central America (see November 2015). Up to 7,000 Cubans are now stranded in Costa Rica. The government has appealed to Nicaragua to open a “humanitarian corridor” and allow Cubans to travel through the country, but Managua refuses. Guatemala and Belize have, on request, also denied the Cubans transit.

The Costa Rican authorities reveal a league that smuggles Cubans who, via Ecuador, try to make their way north and up through Central America to reach the United States, where they can automatically stop if they manage to get there. The Cubans coming to the US by sea are rejected. Cubans can travel to Ecuador without a visa and therefore begin their journey there. Costa Rica decides to give the Cubans temporary visas but when they try to continue north across the border to Nicaragua, they are stopped by the authorities there. Several hundred Cubans are driven back across the border using tear gas and rubber bullets.

Costa Rica follows Mexico’s example and jumps off beauty pageant Miss Universe, in protest of contestant Donald Trump’s disputed statements about Mexicans in announcing his candidacy in the 2016 US presidential election. building a wall against Mexico – at the expense of Mexicans.

Courageous for the president

Three ministers were replaced, among them Wilhelm von Breymann, who was responsible for tourism and was the first openly gay minister in Latin America. President Solís, who has been sitting for a year, is struggling head-to-head to implement his policy, as the PAC has only 13 seats in Parliament. He advocates cross-party cooperation but is unsuccessful. Conservative parties oppose proposals for social liberal reforms, such as equal rights for gay couples. Large parts of the opposition demand budgetary tightening before the new taxes Solís proposes can be discussed.

President Solís replaces his prime minister, whose job is to coordinate the work between the president and parliament. The record has been held by Lutheran Bishop Melvin Jiménez (see November 2014) who has been disputed from the beginning. Many have suspected that Jiménez wanted to turn Costa Rica, which is constitutionally Catholic, into a secular Jiménez, who is close friend of the president, also considered an outsider within the PAC. Rumors of abuse of power have exacerbated the situation, not least as the PAC was formed with the intention of making politics more “ethical”. Jiménez’s replacement, Sergio Iván Alfaro, on the other hand, is a PAC veteran and his election means that Solís can rely to a greater extent on full support at least from the 13 PAC members.

Bishop is approved as minister

The Supreme Court rejects a question by Lutheran Bishop Melvin Jiménez as Prime Minister, on the grounds that the Constitution prohibits members of religious orders from being also ministers. According to the court, the rule is applicable only to Catholics (see Religion and Political system).

On the international day against gay and transphobia, the rainbow-colored flag of pride is raised next to the nation’s banner at the presidential palace, and President Solís is tweeting about a Costa Rica without discrimination. It is a strong mark in a country where LGBT rights are far from obvious for everyone.

Solís takes over as president

Microchip manufacturing is shut down

Microchip manufacturer Intel announces that it will close its manufacturing plant in Costa Rica, which means that 1,500 jobs will disappear. It is expected to affect exports and growth and represents a staggering symbolic defeat: the company accounts for 6 percent of gross domestic product and just over 20 percent of exports (see Economy and Foreign Trade). Intel, however, retains development operations with around 1,000 employees in Costa Rica.

Given victory in the presidential election

When the second round is held, PAC’s Luis Guillermo Solís receives 78 percent of the vote, while 22 percent vote for PLN’s Johnny Araya Monge – despite the fact that he withdrew from the election (see March 2014). Voter turnout is just under 57 percent, which is a lower figure than normal but relatively high given that nothing is at stake. Solís speaks of national unity and less political polarization in his victory, which may partly be due to the tough situation the new president ends up in when the PAC is only 13 of the 57 legislative seats.

One month before the second round of presidential elections, the ruling party PLN candidate Johnny Araya jumps in practice. According to a poll conducted by the Universidad de Costa Rica, PAC’s Luis Guillermo Solís leads with just over 64 percent of the vote to just under 21 percent for the opponent. Araya says he does not intend to waste “millions of colones” on an electoral movement when voters have already decided. The law does not allow a presidential candidate to formally withdraw and the election will be held as planned. Solís, who still has to be elected, says in a comment that election whales are the biggest threat to democracy in Costa Rica. Araya’s dropout surprises most, not least as opinion polls for the first round of elections proved so wrong. Some PLN members continue to run an election campaign.

Unexpected result in first round

In the first round of the presidential election, PAC’s Luis Guillermo Solís unexpectedly receives the most votes, 30.6 percent against 29.7 percent for PLN’s Johnny Araya Monge, who has long been a leader in opinion polls. Araya, a longtime mayor of San José, has done what he could to distance himself from the incumbent government, but has emerged as alienated from voters (including admitting he had no idea about the price of a casado– a common “right of today”). Of the other candidates, the Breda front’s José María Villalta receives about 17 percent, ML’s Otto Guevara about 11 percent and Pusc’s Rodolfo Piza 6 percent. In the parliamentary elections, PLN also loses support and receives 18 seats, while PAC (13) and Pusc (8) increase. The biggest increase, however, is the left-wing FA, from 1 mandate to 9. The right-wing ML rallies instead, from 9 mandates to 4.