In the Comoros, there are only around 7,000 wage employees according to the LO-TCO’s aid committee. 5,000 of them are government employees. Other citizens support themselves in work outside the formal economy. Around two-thirds of the inhabitants survive on small-scale cultivation for their own use. Unemployment is high.

Despite the poorly developed labor market, there are two union central organizations, the Confédération des Travailleurs des Comores (CTC) and Union Syndicale (US). CTC had around 5,000 members in 2015. There are just over a dozen unions, of which two teachers are among the largest.

The Constitution does not guarantee the right to strike or the right to organize itself. But in practice, strikes are relatively common, especially among teachers and healthcare professionals who protest that they have not received their salaries. There are set minimum wages. Child labor is prohibited but there is information that it is relatively common. Some women work as maids without pay other than food and shelter. 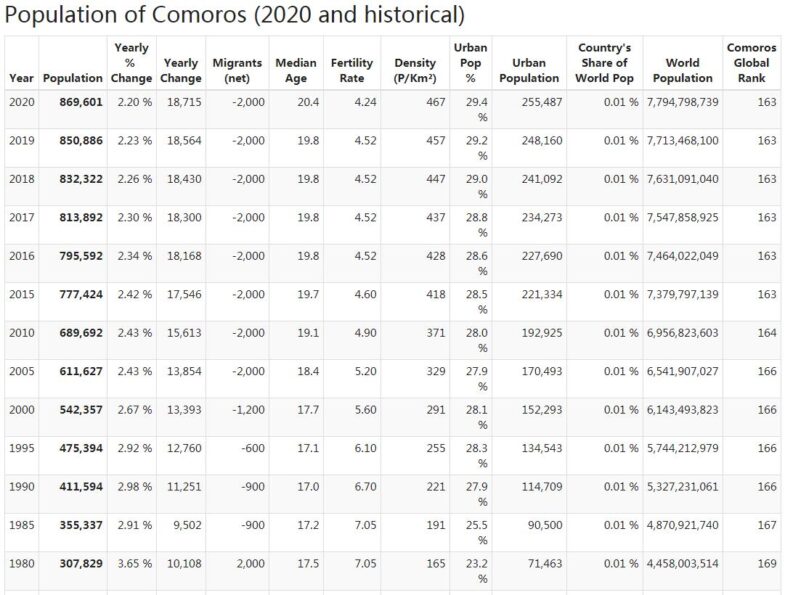 Several opposites are sentenced by a security court to the criminal work and life imprisonment for conspiring against the state. Former Vice President Ahmed Said Jaffar, who has moved to Tanzania, is sentenced in his absence to forced labor. Former Colonel and Deputy Commander Ibrahim Salim is among those sentenced to prison. Otherwise, there is only scant information about the judges. A few days later, Juwa’s secretary general Ahmed el-Barwane is sentenced to seven years in prison for ordering an attack on a soldier during the referendum. An even longer sentence, 20 years, gets another Juwa politician, Tocha Johar, who is accused of attacking a policeman. About 20 others are also sentenced to up to three years in prison, while two people are acquitted. It is not possible to appeal the judgments.

Abdou Salami Abdou, governor of Anjouan Island, is arrested on charges of involvement in the island insurgency in mid-October, when at least three people were killed. He is accused of trying to “undermine the country’s cohesion, participation in rebellion and participation in murder and rebellion”.

“Army has regained control of Mutsamudu”

Education Minister Mahamoud Salim Hafi says that the government army has now regained control of the city center of Mutsamudu on the island of Anjouan and defeated the uprising against President Azali Assoumani, which has been going on for days. Many civilians have fled the vulnerable area, since the authorities shut down both electricity and water. President Assoumani promises amnesty to all civilians who give up their weapons to the military. Abdou Salami Abdou, Governor of Anjouan, who belongs to the opposition party Juwa, says he does not know who was behind the uprising. The port has reopened. There is no information that anyone has been arrested.

The violence in Mutsumudu continues

Government forces and opponents of President Azali Assoumani gather in Mutsumudu for the third day in a row. At least three people are reported to have been killed in the violence, and even more should have been injured. According to Interior Minister Mohamed Daoudou, the situation in the capital has been normalized, but witnesses contradict this. He blames the violence on “terrorists, drug addicts and alcoholics”. Both the UN and the African Union (AU) call on the parties to hold new peace talks.

An exchange of gunfire erupts between government forces and people who oppose President Azali Assoumani clashes in the capital of Anjouan, Mutsamudu. At least one person is shot dead and several people are shot. Concerns erupted on October 15 when security forces began to remove the barricades opposition activists erected. The government claims that the activists belong to the opposition party Juwa. The authorities have declared a state of emergency in the capital, but the violence has continued. According to witnesses the news agency AFP talked to, some activists are equipped with automatic weapons.

Arrest warrants are issued for the former vice president

Prosecutors issue an arrest warrant for former Vice President Ahmed Said Jaffar. This happens after he was indicted in his absence for “conspiring against the state” when he opposed the president’s constitutional reforms. According to media reports, the former vice president is traveling abroad. A few days later, Deputy Commander Colonel Ibrahim Salim is arrested, according to the family accused of corruption and terrorist acts against the incumbent government. This is one of several arrests of politicians and militants who opposed the constitutional reform adopted this summer (see July 2018).

Opposition to the opposition following the referendum

Former President Ahmed Abdallah Zambi of the Juwa Party is being prosecuted for his role in a fraudulent deal in which thousands of Comorian passports were sold illegally and the equivalent of nearly a billion dollars, according to a report published in April (see April 2018). Several other politicians and activists have been arrested following the July referendum. Among them is Juwa’s Secretary-General Ahmed el-Barwane has been arrested and charged, according to his defense lawyer, for attempted murder and conspiracy. Juwa spokesman Ahmed Abdou Chakour is also in custody. About 10 regime-critical politicians from Juwa and the CRC are reported to have gone underground

Constitutional amendments are approved in a referendum

Voters vote by close to 93 percent for the disputed amendments to the constitution proposed by President Assoumani, in a referendum boycotted by the opposition. According to Election Commission Ceni, turnout is 64 percent. The changes mean that the system will be abolished, which means that the post of president of the Union will rotate between the three islands. Furthermore, the president is given the right to scrap the system of three vice presidents, which, like the rotation of the presidential post, aims to create a balance of power in the divided country. In addition, Islam becomes a state religion. The opposition does not acknowledge the result and claims that cheating has occurred. Shortly after the election, Assoumani promised to announce new elections until the beginning of 2019.

The Vice President is deprived of important ministerial posts

Vice President Ahmed Said Jaffar is deprived of several of his ministerial posts, including those responsible for agriculture, industry and energy, in a government reshuffle. He can only maintain responsibility for social cohesion. This has happened since he has harshly criticized the president. Jaffar is one of three vice presidents. According to the constitution, the president is not entitled to dismiss a vice president, but the firing of Jaffar is expected to lead to protests on the island of Moroni where he has many supporters.

Violent protests against the president’s plans for a referendum on constitutional reform erupt in Moroni and in Mutsumudu in Anjouan. The police intervene against the protesters with tear gas. At least one person is injured in connection with the protest.

Vice President Ahmed Said Jaffar now joins the critics of President Assoumani’s plans to change the constitution. He accuses the president of abusing power and that the referendum scheduled for July is in violation of the law. Protests against the president have led to violent clashes between government-critical protesters and security forces. Alongside Ahmed Abdallah Zambi, who is under house arrest, another prominent opposition leader has been arrested.

The Comoros will join Comesa

Foreign Minister Mohamed Elamine Souef announces that Comoros will join Comesa in August. The aim is, he says, to increase the exchange with English-speaking countries in the region such as Kenya and Uganda.

Criticism against the president is growing

Criticism against President Azali Assoumani is growing. The opposition accuses him of having in effect carried out a constitutional coup, when he dissolved the Constitutional Court and put one of his representatives, Ahmed Abdallah Mohamed Sambi , in house arrest. As yet, nothing has emerged about what constitutional changes the Comoros will vote on in July. Hundreds of Zambi supporters gather outside the largest mosque in Moroni to demand the ex-president be released.

Former President Ahmed Abdallah Mohamed Sambi is under house arrest and is not allowed to leave the country without special permission, according to a decision by the Interior Ministry. The action is taken when Sambi returns to his home country after a six-month stay abroad. He has previously criticized President Azali Assoumani’s decision to dissolve the Constitutional Court and the plans for a referendum on a constitutional form on July 29. It is still unknown what changes to the constitution that Assoumani wants to make.

In a televised speech, President Azali Assoumani announced plans to rewrite the country’s constitution that voters will have to decide on in July this year. Exactly what changes are planned is not clear, but the president says he will follow the recommendations made by politicians, experts, officials and activists at a series of meetings during a national conference (Assises Nationales) . The aim is to promote stability in the country. The opposition, however, fears that the constitutional changes are an attempt by Assoumani to remain in power when his second term expires in 2021. The recommendations should allow a president to sit for two five-year terms in succession, which would depart from the principle that the presidency should rotate between the islands.

The President dissolves the Constitutional Court

President Azali Assoumani dissolves the Constitutional Court on the grounds that it does not work because all the seats are not filled. The decision is criticized by the opposition party Union for the Development of the Comoros (UPDC) who believes that the president is guilty of abuse of power and that he deliberately drew on the appointments of new judges.

Ex-presidents are accused of embezzlement

Two former presidents, Ahmed Abdallah Sambi and Ikililou Dhoinine, are suspected of cutting large sums in connection with the sale of Comorian passports. This is stated in a parliamentary report, which also requires them to be held accountable for these crimes. It was in 2008 that the Comoros sold passports to stateless persons, so-called bidunas, who resided in the United Arab Republic and Kuwait. In exchange, these countries would invest in the Comoros. In the following years, 48,000 Comorian passports were issued as part of this, but only a few to biduens, but in addition, another 6,000 passports must have been issued and sold alongside. The passport was sold for between 25,000 and 200,000 euros, most of which were embezzled.

The Comoros is one of 44 countries to sign a Free Trade Agreement at the African Union Summit in Rwanda. The agreement must be ratified at the national level before the AFCFTA free trade area can become a reality, but it is seen as a historically important step towards increased trade exchange within Africa.