Rapid economic growth, combined with government programs to create new jobs, pushed unemployment from a peak close to 10 percent in 2009 to just over 6 percent in 2013, the lowest figure in 15 years. Since then it has risen somewhat again. Youth unemployment is significantly higher.

Around 30 percent of those who work in Chile do so in the informal sector, according to the OECD, and are thus excluded from official labor market statistics. Almost one in ten of the employees work in agriculture, just over two in ten in industry and the rest in the service sector.

The proportion of women included in the labor force has increased from one third in the early 2000s to about half. During the 2004–2009 government of Bachelet, there was a five-fold increase in the number of duty-free kindergartens, even though one according to a World Bank study had little impact on women’s position in the labor market. Although almost all of the university students are women, Chile continues to have a higher proportion of highly educated housewives, most countries are comparable.

There are about 50 trade unions, most of them affiliated with the national organization CUT (Central Única de Trabajadores de Chile), but only about a tenth of the wage workers are unionized.

Chile’s trade union movement was severely affected during the military dictatorship of 1973–1990, when both CUT and other trade unions were banned. It was not until 2001 that large parts of the anti-union laws that were introduced were deleted. 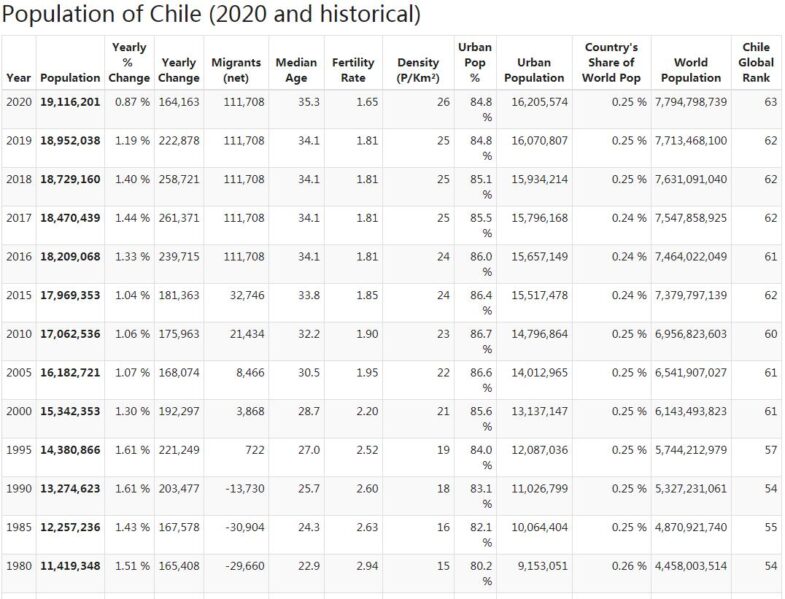 There are some limitations in both the strike right and the right for the unions to negotiate freely. The state sets a minimum allowable salary, which is adjusted annually. Public employees are not allowed to strike, as are the staff of a number of companies whose operations are considered to be particularly socially important. Employees in agriculture depend on employers’ willingness to negotiate wage collective bargaining, and they are also prohibited from striking during harvest time.

Child labor is prohibited but still exists in the informal sector. There is also information on forced labor.

Former Army Chief Juan Emilio Cheyre is sentenced to three years and one day in house arrest for his role in the death of 15 people in 1973. Cheyre was Army Chief 2002-2006 and is the highest ranking person so far convicted of abuse during the dictatorship. His boss at the time of the murder, Aristo Lapostol, is also sentenced to 15 years in prison for the murder of left-wing activists committed in the city of La Serena, by the notorious so-called Death Caravan.

Former President Michelle Bachelet takes over as UN High Commissioner for Human Rights, after being elected by the General Assembly in August. The ordinance is for four years.

Appointed priest is charged off

Pope Francis cancels Fernando Karadima, which means he is deprived of his priesthood. As early as 2011, the Vatican found that Karadima was guilty of abuse in the 1980s and 1990s and isolated him (see January 2018). A week earlier, Francis has accepted the farewell applications from two more bishops (see May 2018). Thus, a total of seven bishops have been allowed to go.

The State Prosecutor states that the number of sexual abuse cases against children within the Catholic Church has increased to 119 (see also January and May 2018). A total of 167 bishops, priests and others in the church are now under investigation for sex offenses from the 1960s onwards. It is not clear how many of them are still active in the Church. Among those nominated are the Archbishop of Santiago, Ricarco Ezzati, the Church’s highest representative in Chile. Ezzati is accused of contributing to darkening information about abuse. Evidence against him should have been found during a raid on the Archbishop’s seat earlier in August. Parliament has begun preparing for the withdrawal of the Italian-born Ezzati citizenship on the grounds of the allegations.

Ex-officers are convicted of the murder of Victor Jara

Pope Francis accepts the farewell applications from two of the 34 bishops who in May asked to leave their posts. In doing so, he has approved five of the farewell applications. Among the three who got ready to leave earlier in June is Juan Barros (see January 2018), who the Pope now says it was “a serious mistake” to take in defense. Among the two who are now allowed to go is 78-year-old Alejandro Goic Karmelic whose diocese has just come into focus for a new scandal in which 14 priests were suspended for sexual abuse.

Raid against the church

Police conduct a raid on premises belonging to the Catholic Church in Santiago and Rancagua, while two Vatican envoys are visiting the country as a result of the pedophile scandal (see January 2018). A prosecutor emphasizes that the raid is not directed at the church in general, but is based on the allegations of sexual exploitation of minors directed against some members of the church. In total, some 80 Catholic priests in Chile have reported to the authorities for sexual abuse since 2000.

All bishops resign after pedophile scandal

All of Chile’s 34 bishops submit their resignation applications, due to the pedophile scandal within the church that has been hotly debated since the Pope’s visit in January. The bishops in Rome, called by the Pope, say that it is now up to him to decide on the matter. The bishops and the pope have been meeting for three days as a result of the scandal that has become a serious burden to the Catholic Church and St. Francis. In the spring, an investigation was conducted which led to a 2,300 page long report in which the Catholic Church in Chile is accused of harboring an “abuse culture” with extensive blackout and inaction.

Piñera takes over as president

Chile, together with ten other countries, sign the CPTPP (Comprehensive and Progressive Agreement for Trans-Pacific Parthership) free trade agreement, at a ceremony in Santiago. The agreement is also called TPP-11 and is a slightly revised version of TPP. The changes are a result of the US withdrawing from the TPP before it came into force. The CPTPP is presented as a counter to the anti-free-trade policy pursued by US President Donald Trump.

The Pope apologizes for the pedophile scandal

Pope Francis begins a visit apologizing for a scandal that shook the Catholic Church in Chile, after it was discovered that many children were sexually abused by a particular priest, Fernando Karadima between 1980 and 1995. The Pope is welcomed by 400,000 at an open trade fair in Santiago, but protests occur simultaneously against the visit. Many require more action after the disclosures and are particularly critical of the Pope’s having appointed a bishop accused of trying to obscure the pedophile scandal. But the Pope takes Bishop Juan Barros in defense, which upsets many Chileans. Francis later apologizes but insists he believes the bishop to be innocent.

Chilean criticism of the World Bank

The government has sharply criticized the World Bank since its chief economist Paul Romer said that political motives were probably behind Chile’s deteriorating ranking in terms of business climate and competitiveness under the Social Democratic government. During President Bachelet’s reign, Chile has fallen from 34 to 55 of 190 countries on the list. The ranking is based on factors such as how easy it is to form a company, get credit, pay taxes and get building permits.