About three out of four Chadians live on agriculture or livestock. Only about 5 percent of the population work in industry. The rest of the workforce is found in service and public operations. Many Chadians are employed in the informal sector of the economy.

Unions can work relatively freely, but few Chadians are unionized. The largest central organization is the independent UST (Union des Syndicats du Chad), which gathers 18 federations. The UST has close ties to the political opposition in the south, while relations with the regime are tense and union representatives complain about political pressure and threats. The union has tried to organize people in the informal sector into cooperatives to promote their conditions.

In the absence of a dynamic private sector, the state is by far the largest employer. 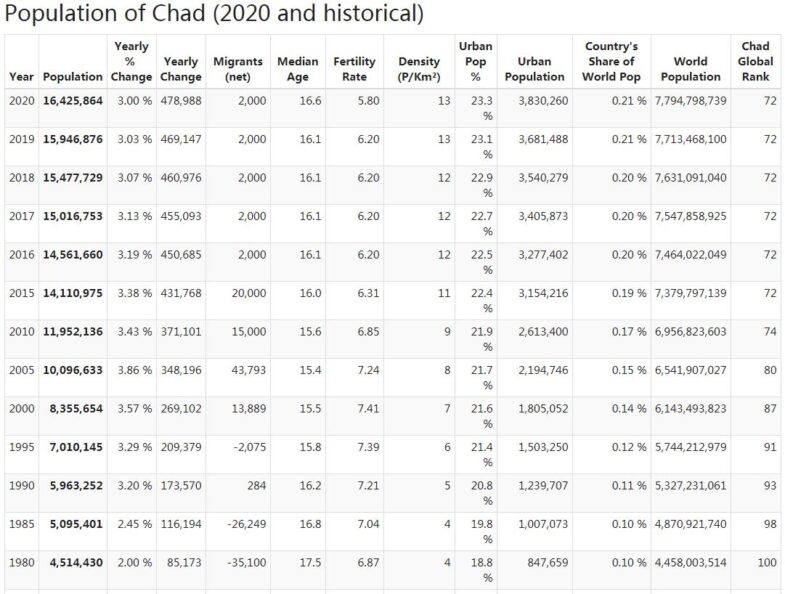 The parliamentary elections are postponed again

The parliamentary elections, which should have been held in 2015 but which have been postponed several times, are postponed until May 2019 (see April 2018). The reasons are that an independent electoral commission must first be set up, that the electoral law should be reviewed and more.

The new Constitution comes into force

The government is leaving

Prime Minister Albert Pahimi Padacké and his government resign as a result of Parliament’s adoption of constitutional proposals (see March 2018).

Chadians are allowed to travel to the US again

The United States announces that Chad will be removed from the list of countries whose residents are prohibited from entering the United States. The reason, according to the Americans, is that Chad has now strengthened its security practices to be in line with what the US authorities require. Chad joined the list in September 2017.

The state radio announces that in a meeting with representatives of opposition alliance Fonac, President Déby stated that the promised parliamentary elections will be held in November. The election would have taken place in 2015.

After ten days of discussion, a “national forum” as President Déby calls together proposals that, if approved, strengthen the president’s power and allow Déby to remain in his post by 2033. Over 700 people – politicians and religious leaders and local leaders – participated in the discussions boycotted by the opposition. Among the proposals agreed upon by the participants are that the president’s term should be extended from five to six years and that the number of re-election be limited to one. At present, the President can be elected on any number of occasions. The change will apply from the election in 2021, which means that President Déby, who is now in his fifth term, can be re-elected and remain in power until 2033. The proposal also means the removal of the post of head of government and the introduction of presidential rule. Other proposals are to extend the terms of office of MPs from four to five years and to merge the country’s 23 regions into 17 provinces. Furthermore, a council will be formed by representatives of different regions. According to the proposal, the Council shall be called the Higher Council (Higher Council) and act as an upper house in Parliament. The opposition dismisses the proposals as “ridiculous”. Before they become reality, the proposals must be approved by Parliament.

Chad is one of 44 countries to sign a Free Trade Agreement at the African Union Summit in Rwanda. The agreement must be ratified at the national level before the AFCFTA free trade area can become a reality, but it is seen as a historically important step towards increased trade exchange within Africa.

Opposition parties are stopped after protests

The government bans ten opposition parties from operating for two months, citing that they “disrupted the general order” and “called for violence.” The parties, according to the government, have ignored the social protests that have been carried out since January against new economic austerity measures. loans from the International Monetary Fund (IMF), the government has lowered the salaries of civil servants and raised taxes.