There are no reliable statistics on the number of unemployed. Estimates claim that close to one-third of the population, that is eight million people, are either completely unemployed or underemployed.

University graduates find it difficult to find jobs in their area of ​​expertise, and many of them leave the country to work abroad.

Employees have the right to organize trade unions, but the activities of trade unions are surrounded by many restrictions. A new trade union must be registered with the government. If a trade union starts without registration, the initiators run the risk of imprisonment or fines, even though such penalties violate international labor conventions that Cameroon has signed.

The government has refused independent trade unions, especially in the public sector, to register. A number of unions are active even though they have not been able to register. Violations of union rights are common, such as harassment of union leaders. Collective agreements exist, but it is common for employers not to follow signed agreements. 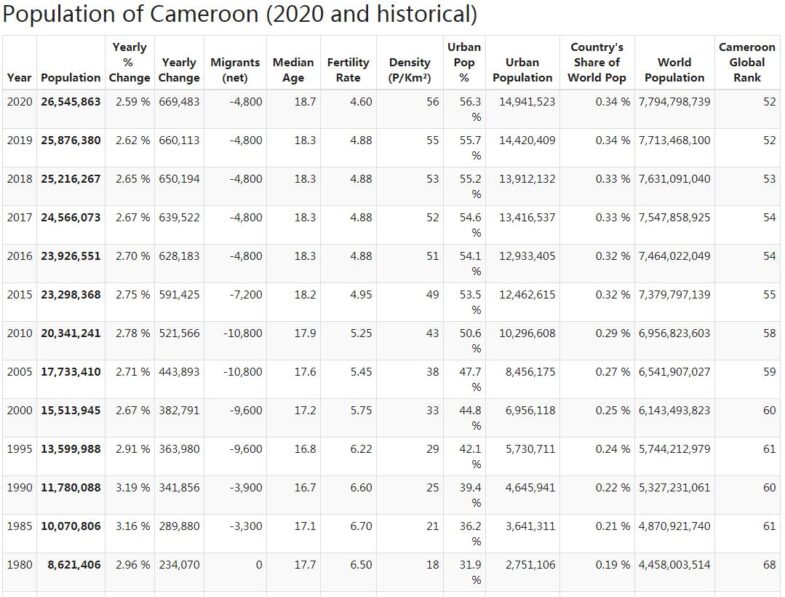 Slave labor is forbidden, but it is reported in northern Cameroon. Landowners in the south and east sometimes use the pygmy people to bake as free labor at harvest time. It also happens that prisoners are used as labor and that the payment goes to prison officials. Child labor than usual even though children under 14 are not allowed to work under the law.

Journalists are prohibited from working

The National Council for Communications gives five Cameroonian journalists a ban, including Roger Tuile Tuile, editor-in-chief of La Tribune de l’Est Economi. He is banned from working as a journalist for all time because of an article series on how the fund that funds the country’s social security system is managed. Another editor receives a six-month work ban for publishing “unfounded” information about the head of a hydropower project.

New attacks in the west

Four police officers are killed in an attack on a police station in the village of Kembong in the troubled South West region. The attack is blamed on separatists from the country’s English-speaking minority. Earlier in the month, six attackers were shot dead in a raid on another police station in the region. A policeman lost his life in that attack.

The death toll rises in the conflict in the West

Four soldiers are killed by suspected separatists near the village of Mamfe in the Southwest region. The next day, two police officers lose their lives in an attack on a border post in the same region. These are the latest victims of the escalating crisis between the English-speaking minority in the western part of the country and the country’s French-speaking majority population. According to the government, ten members of the security forces were killed only in November.

The members of Cemac (Cameroon, Central African Republic, Chad, Equatorial Guinea, Gabon and Congo-Brazzaville) announce that the internal visa-free agreement has now been ratified by all member states and will therefore be implemented. The agreement has been missing for 15 years through negotiations. The process has dragged on the time when the oil countries of Gabon and Equatorial Guinea were worried about being flooded by job seekers from neighboring countries. Now, however, these countries have also ratified the agreement.

The International Crisis Group, ICG, urges the Cameroonian government to immediately suspend its “murderously repressive” handling of the protests in the English-speaking regions. Otherwise, the development risks triggering an armed uprising, according to the ICG. During the fall, at least 40 protesters were killed and over 100 injured by security forces, writes ICG.

Fifty-eight men who claim to have been forcibly recruited by Boko Haram surrender to the authorities in northern Cameroon after crossing the Nigeria border. With them in flight they also have 86 women and 244 children. They say they were captured by the Islamist group during raids on their villages and taken to Nigeria where they were forced to take part in fighting. The local governor orders that they be carried further away from the border so as not to risk retaliation.

Over 500 English speakers arrested according to Amnesty

Amnesty International states that more than 500 members of the English-speaking minority have been arrested in an arrest wave following the demonstrations at the beginning of the month. According to Amnesty, the arrests have usually been completely arbitrary. Many are accused of rebellion, others for lack of identity documents, for damage or for participating in illegal protests.

Lawyer Akere Muna from the English-speaking minority announces that he plans to run for office in the 2018 presidential election. Muna has previously been vice chairman of the organization Transparency International , which works against corruption.

Symbolic declaration of independence is proclaimed

Separatists in the English-speaking provinces make a symbolic declaration of independence on social media. Sisiko Ayuk proclaims himself president of the new republic “Ambazonia” which the separatists want to create. The Declaration of Independence is followed by demonstrations and clashes between activists and the government soldiers sent to the area to deal with the recent growing tensions in the English-speaking provinces. According to the human rights organization Amnesty International , at least 17 people are killed in the violence that erupts the days following the Declaration of Independence.

Concerns in the English-speaking provinces

Cameroon’s highest military court decides that 27 leaders of the English-language revolt should be detained pending trial. The three designated as the protesters are a lawyer, a teacher and a reporter. Everyone has been in custody since January in connection with calls for strikes against the dominance of the French-speakers.

The opposition is investigating suspected murders

The Social Democratic Front (SDF), Cameroon’s leading opposition party anchored in the English-speaking minority, appoints a commission to investigate reports of suspected murders and other abuses carried out by police in the troubled areas of the Northwest and Southwest. The SDF claims that police violence has claimed four lives. At least 74 people have been indicted in military courts for participating in protests against the government.

Ten years in prison for reporter

A correspondent for the French radio station RFI is sentenced by a military court to 10 years in prison for “not condemning terrorism”. Reporter Ahmed Abba is also sentenced to fines around € 85,000 for having “laundered money from terrorist activities”. If he does not pay, the prison sentence is extended by five years. Abba is accused of cooperating with Boko Haram and failing to advise the authorities of planned attacks. Amnesty International describes the trial as a parody of justice and evidence that military courts are not competent to investigate civilians.

After almost three months without internet connections, companies in the English-speaking areas report that they are making big losses. The French organization Internet Without Borders estimates that the blockade has cost Cameroon nearly three million euros in lost business.

The conflict is intensified in the West

All internet connections with the English-speaking areas in the northwest and southwest are shut down since the government started a campaign against “fake news” on social media. Three English-speaking opposition politicians are arrested and charged with terrorism before a military court. They risk the death penalty.