Officially, unemployment in Cambodia is low, but in reality underemployment is a major problem. The vast majority of residents are outside the formal economy; they have no fixed wages and do not pay taxes.

The vast majority are engaged in self-catering agriculture. In the cities, many work with housework or street sales and other black jobs that are not registered with the authorities. According to official statistics, almost half of those with formal employment have some side work, such as cultivation or livestock management.

The textile and shoe industry (see Industry) gives many, not least women, jobs from poor families. More than 600,000 people are estimated to work in the more than 600 factories. Working conditions are often difficult and a commonly reported problem is that employees fail at the workplace. The causes are long workouts combined with poor ventilation as well as strong chemicals and adhesives in, among other things, shoe manufacturing. Abuse of employees occurs, as well as absentee wages.

Nevertheless, Cambodia is considered to have gone a little further than some competitor countries in terms of improving working conditions. This has given the country benefits from ethically conscious buyers from Europe, for example. However, especially after 2013, strikes among factory workers have become commonplace. The minimum wage has been a battle issue and it has been gradually increased. Not infrequently, the strikes have become violent. In 2014, at least four factory workers were killed when police fired demonstrators.

With the exception of some public servants such as judges and military, employees have the right to organize themselves. But threats and harassment of union activists occur, and several of them have been murdered. The trade unions are weak and fragmented, except in the textile industry. There is a government-friendly and several more independent central organizations. A very small part of the workforce is organized. 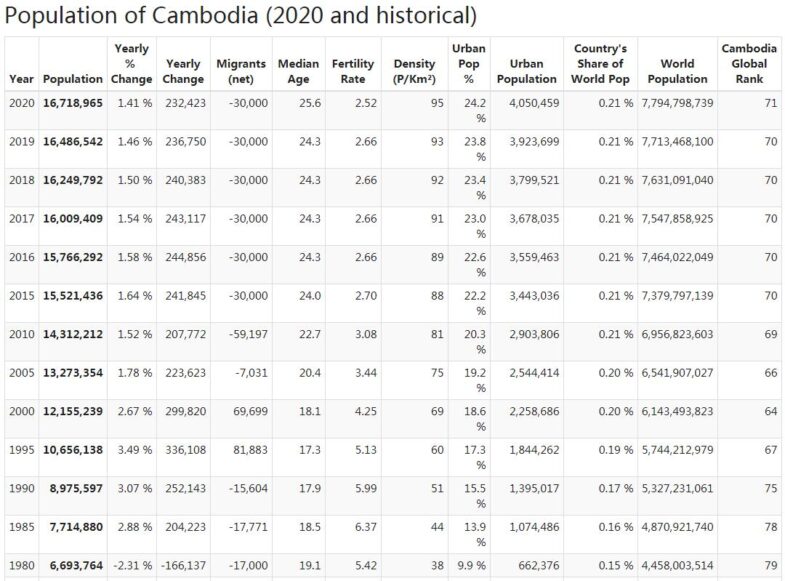 In 2016, a number of laws were passed that union representatives believe were created to limit the union’s influence in the strike-affected textile industry. For example, trade unions must start reporting their finances to the authorities each year.

Child labor is common, especially in agriculture and in households.

The EU withdraws its support for the 2018 elections

The EU withdraws its support for the Cambodian election and the Election Commission after the judiciary dissolved the largest opposition party CNRP and its main leaders imprisoned or moved.

The United States is deporting 70 Cambodians

The US decides to deport 70 Cambodians who reside illegally in the country. Cambodia says this is done according to an agreement between the two governments. The United States also announces that it will be more difficult for some Cambodians to obtain visas to the United States because of “anti-democratic acts” by the Hun Sen government. It is unclear which people it is. The decisions are made as part of the US hardening attitude towards Cambodia as Phnom Penh broadcasts the freedom of the country’s political opposition ahead of the 2018 general elections.

The US withdraws support for the 2018 election

Relations with the United States are deteriorating. The Washington government is withdrawing all financial support for the Cambodian election 2018 as a result of the Supreme Court dissolving the country’s major opposition party CNRP. Prime Minister Hun Sen responds by asking the US to stop sending any kind of aid to Cambodia.

Journalists are charged with espionage

Journalists Oun Chhin and Yeang Sothearin are charged with espionage for delivering news material to the US-based Radio Free Asia (RFA). Both prosecutors have previously been employed by RFA, but are now broadcasting from a studio in Cambodia that the authorities consider to be illegal. They face up to 15 years in prison if found guilty. The charges are part of the regime’s ongoing crackdown on political opposition, outspoken NGOs and independent media.

The government gives the US answers to numbers

The Cambodian government responds to US criticism of the dissolution of the opposition party CNRP by accusing Washington of being the leader of the gang that tried to overthrow the CPP government. Cambodia threatens to forge stronger ties with Russia and China.

Sharp criticism from the US and the EU

The United States is responding strongly to the Cambodian Supreme Court’s decision to dissolve the opposition party CNRP and ban more than 100 of its politicians from serving within the next five years. The US demands that the verdict be torn down, otherwise the 2018 election will lose all its legitimacy as the ruling CPP will in practice go to elections without competition. The election will not be considered free and fair and Cambodian democracy is taking a big step backwards, Washington said in a comment. Similar statements also come from the EU. US calls on Cambodia to release CNRP’s imprisoned leader Kem Sokha. The ruling to dissolve the CNRP is the culmination of a series of repressive measures against the opposition taken by the CPP government as the election approaches.

The Supreme Court dissolves the CNRP

The Supreme Court dissolves the country’s main opposition party CNRP, prohibits 118 of its officials from working politically for the next five years, and excludes CNRP members from parliament. The ruling comes after Prime Minister Hun Sen accused CNRP of cooperating with the United States to overthrow his government.

Mu Sochua, vice chairman of the CNRP and MP, is fleeing abroad after receiving information that she is about to be arrested by the police. Nearly half of CNRP members have left Cambodia since party leader Kem Sokha was indicted for treason in September 2017. Many analysts believe that the CPP government is now striking hard against the opposition to secure a victory in the July 2018 general election.

Kem Sokha is charged with treason

Prime Minister Hun Sen and his government continue to limit the scope of regime-critical politicians and media ahead of the 2018 elections. This is despite the fact that the CNRP leader, as a parliamentarian, enjoys prosecution immunity. Kem Sokha risks up to 30 years in prison. According to the indictment, Kem Sokha in a video recording in 2013 has told his followers that he received support and advice from the United States in his political strategy.

Cambodia Daily is shut down

One of Cambodia’s few independent newspapers, Cambodia Daily, has been shut down since the government ordered it to pay $ 6.3 million in taxes. The newspaper has often written regime-critical texts and Prime Minister Hun Sen has called its publishers “thieves”. The newspaper’s management was given 30 days to pay the tax, but announces that Cambodia Daily will be closed down instead.

A political analyst, Kim Sok, is sentenced to 18 months in prison for slander and incitement. Kim Sok has said in a radio interview that the government is involved in the assassination of government critic Kem Ley in July 2016. Sok will also pay damages to the government of the equivalent of 200,000 US dollars.

Prime Minister Hun Sen announces that the next parliamentary election will be held in a year, July 29, 2018. Following the CNRP’s success in the June local elections, tensions are rising ahead of the general election. The day before the announcement of the election date, a law has been definitively adopted that prohibits political parties from cooperating with previously convicted persons, a law that the opposition believes is directly directed at Sam Rainsy and the CNRP.

Five activists from the reputed Cambodian human rights organization ADHOC (Cambodian Human Rights and Development Association) are released on bail after being jailed since April 2016. They are accused of trying to bribe a witness to silence in connection with a sex scandal involving an opposition politician. Regime critics believe Prime Minister Hun Sen is using the scandal to silence opposition and democracy and human rights activists. The charges against the five released activists remain.

Opposition CNRP wins 44 percent of the vote in local elections versus 51 percent for CPP. However, the election system causes CPP to win in 1,156 of the 1,646 municipalities, while CNRP takes home 489 municipalities. A third small party wins in a municipality. That means another big election victory for CPP, but CNRP gains power in more than ten times as many municipalities as in the 2013 election, when they won in 40 municipalities.

The opposition party CNRP’s vice-chairman Kem Sokha is elected new party leader since Sam Rainsy was forced to resign as a result of a court decision (see February 2017).

Rainsy is prevented from running

Sam Rainsy announces via Twitter and Facebook that he is leaving as CNRP leader “for the sake of the party”. The message comes shortly after Hun Sen has proposed that the electoral law be changed so that people convicted of crimes should not be political leaders. The proposal is considered to be directly aimed at Rainsy, who for more than a year has been in self-imposed exile in France to avoid a two-year prison sentence for slander. He has not been to Cambodia since 2015. In December 2016, Rainsy was sentenced to another five years in prison for a Facebook post about the Vietnam-Cambodia border crossing.