In Burundi, nine out of ten residents rely on small-scale farming for housing needs or for jobs as sales in the informal sector of the economy. Thus, most people in practice lack union rights.

Burundi has signed all international conventions on employee rights and protection, but both the authorities and employers regularly violate these.

The trade unions that exist mainly organize public employees. At the private companies, there are hardly any trade union organizations.

The authorities often interfere in the activities of the unions, for example by refusing the election of representatives or by forming “unions” that compete with the real unions.

So many conditions must be met before a strike can begin that in practice the government can illegally declare a labor market conflict at its own discretion. Many union leaders have been jailed for leading strikes. Those who take part in strikes risk dismissal. 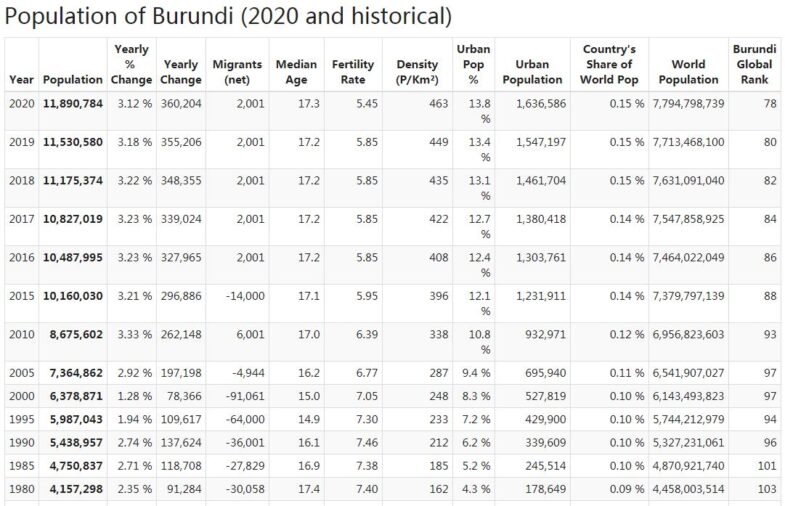 The difficult working conditions have meant that the union’s operations are very low. After the political crisis in connection with the 2015 elections (see Modern history), there is almost no union activity at all in the country.

Rwanda is accused of armed attack

The Burundian army is attacked in Twinyoni Hill, about ten miles north of Bujumbura and five miles from the border with Rwanda. According to a military spokesman, 19 soldiers are killed and 20 injured. The government in Bujumbura places the blame on Rwanda’s government who refuses all involvement. Burundi reports the incident to the UN, AU and the East African Community (EAC).

Hundreds of Burundians return from Tanzania

A UN commission examining the situation in Burundi (UN Commission of Inquiry on Burundi) warns that the ruling party CNDD-FDD and its youth militia Imbonerakure have already created a “climate of fear” ahead of the 2020 presidential and parliamentary elections. against human rights, even violations of humanity, the Burundians scare voting on CNDD-FDD and their presidential candidate, according to UN investigators. By silencing all Kirtish voices, the rulers create the impression that calm prevails in the country, according to the investigators. Examples of human rights crimes committed are killings, disappearances, arbitrary arrests, torture and rape of suspected political opponents. The perpetrators almost always go free, as neither the media nor the judiciary can operate freely. UN investigators have not been able to enter Burundi but say they base their report on just over 1,200 statements from victims, witnesses, perpetrators and other sources.

The BBC closes the office in Bujumbura

The British etheric media company BBC announces closing its office in Bujumbura. In March 2019, the Burundian authorities withdrew the BBC and Voice of America’s permission to operate in the country.

Justice Minister Kanyana announces that the government has released 142 of the 3,000 prisoners who the governors promised in December 2018 to release from prisons as a step towards reconciliation with the opposition. The critics, however, say that the releases are due to practical considerations – Burundi’s prisons are over full – and that no political prisoners are among the 142. According to the human rights group Aprodeh, Burundi’s eleven prisons contain 11,000 prisoners despite being built for 4,000.

The BBC is prohibited from operating in Burundi

Burundi bans British BBC from operating in the country and Voice of America gets its temporary broadcast stop extended until further notice. Both broadcast media companies received temporary broadcast bans in 2018. Authorities prohibit journalists and news outlets from sharing BBC or Voice of America news material from Burundi. In December 2018, the BBC aired a TV documentary that, according to the filmmakers, shows how the intelligence service in Burundi uses secret torture chambers to silence dissent. The government of Burundi rejects the content of the documentary. Voice of America received a ban on broadcasting since they partnered with radio journalist Patrick Nduwimana, whom the government accuses of participating in a failed coup in May 2015. Both the BBC and Voice of America continue to broadcast inside Burundi via shortwave radio.

UN offices are closed by the government

UNHCR leaves Burundi at the request of the Nkurunziza government. Relations between the two parties are frozen after UNHCR reported hundreds of extra-judicial executions and cases of torture by opposition and other regime critics.

The Senate approves the relocation of the capital

The Senate (upper house) approves the law underlying the move of the country’s capital from Bujumbura to Gitega (see December 2019).