More than half of Myanmar’s people work in agriculture, forestry and fishing. A growing proportion of people work in the service sector, where the tourism industry is growing rapidly. Trade union rights and rights have been strengthened during the 2010 century.

Statistics on the proportion of unemployed Myanmarians vary widely between different sources. The World Bank and the Asian Development Bank (ADB) state their share at less than 1 percent. In 2013, the first nationwide analysis of the labor market conducted in Myanmar showed that 37 percent of residents lacked a proper employment. Earlier estimates in the 2010s had estimated unemployment at 4-5 percent. In all circumstances, underemployment is high and many are in dire need of small-scale trade and service work.

In 2011, there was a dramatic change in the government’s attitude to trade unions. Having been banned since 1964 and replaced with regime-loyal labor councils, free unions were suddenly allowed back and they were legally entitled to wage negotiations and strike. The UN Labor Organization (ILO) found that the new labor market laws correspond to international standards. The free unions that were formed during the democracy movement in 1988 had gone underground or been in exile. 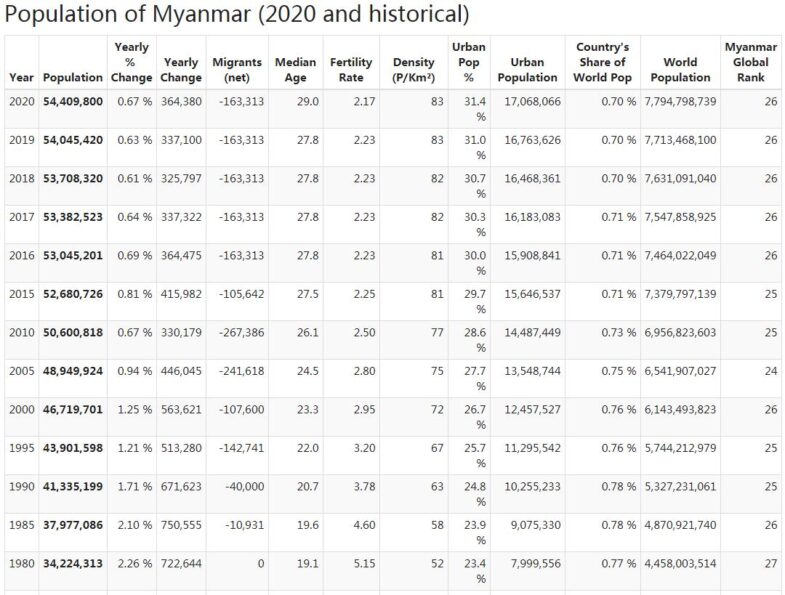 The ILO has published reports on widespread forced and child labor. Following international protests and threats of extended sanctions, the regime banned forced labor in 2000 and two years later the ILO was allowed to open a permanent office in Rangoon. However, forced labor continued, especially in army-controlled areas, and in 2005 the regime organized protest meetings against the ILO and threatened to leave the organization. Thereafter, some improvement seems to have occurred, although exact data is difficult to obtain. In 2013, the ILO abolished all restrictions on cooperation with Myanmar, despite continued reports of forced labor directed specifically at the Rohingya population in Rakhine (see Population and Languages).

Myanmar will hold general elections on November 8, 2020, the Election Authority announces. The election is expected to be a kind of “referendum” over the term of office of the NLD government; the economy has not lifted in the way that Aung San Suu Kyi and her government promised five years ago and many of the minority people express disappointment that their situation has not improved. The criticism of the military and government actions in the troubled state of Rakhine has been harsh. However, State Chancellor Suu Kyi is still a popular person among the majority of Burmese people and the NLD is therefore victorious. The main challenger to the NLD is, like five years ago, the military-backed USDP.

Three officers are convicted of assault against Rohingyans

A military court in Myanmar convicts three officers of assault committed against Rohingy during operations in various villages in Rakhine. The trial is held behind closed doors and there is no information on what crimes have been committed, who the perpetrators are or what punishments they have received. Amnesty International says the lack of transparency during the trial is “alarming”. In the village of Gu Dar Pyin, human rights groups say at least five mass graves have been discovered. Estimates claim that hundreds of Rohingya have been killed in similar offenses against Rohingya villages.

Rescue package from the IMF

The IMF grants $ 356.5 million to Myanmar in the form of a fast-track loan developed to support poor countries in the economic downturn caused by the corona pandemic. In Myanmar, the pandemic has led to sharply reduced tourism and significantly lower referrals from foreign-working Myanmarians. The loans will be used for health care costs, increased food distribution, and cash contributions to the country’s poorest households and to companies and farmers.

Year-long blocking of the internet

The Internet in the state of Rakhine has now been blocked by the authorities for a year. Critics argue that the blockage should cease because it hampers communication during the corona pandemic and thus hinders the fight against covid-19 disease. In Rakhine, since January 2019, fighting is ongoing between the military and the guerrilla Arakanesian Army (AA), which is fighting for increased autonomy for the Buddhist people rakhine (Arakaneser). Myanmar has 287 confirmed cases of covid-19 and six deaths from the disease.

A video spread on social media reveals how government soldiers are abusing arrested men in the state of Rakhine. The soldiers hit and kick the arrested in the heads. The prisoners wear eyelets and claws. The men are suspected to be AA rebels, but relatives of the arrested reject the charges. The military admits that it is government soldiers who carry out the abuses and say that the interrogations are not held properly and that the incident should be investigated.

UN human rights envoy in Myanmar, Yanghee Lee, warns that the military may have committed war crimes and crimes against humanityin their fight against the rebel group Arakanesian Army (AA) in Chin and Rakhine. In that case, it would mean that the country’s army may have committed war crimes against two ethnic groups in the state of Rakhine within a few years: the Rohingy and the Arakanes (rakhine). Lee is accusing the military of disappearance, torture, killing of suspected AA supporters, as well as actions to stop aid broadcasts and prevent injured people from going to hospital. AA is suspected of kidnapping, among other things. The fighting between the military and AA in Rakhine has escalated in recent months and is described as the most intense in the country in several years by the think tank International Crisis Group (ICG). Daily battles are reported in the two states. Crowds of people have been killed, Hundreds have been injured and around 150,000 have fled since the conflict broke out in January 2019. Both parties to the conflict are accusing each other of abuse, including the death of a WHO driver last week. The driver was carrying tests for covid-19.

The authorities are easing somewhat on the closure of Rangoon introduced in March. A nightly curfew remains in the city.

President Win Myint announces that a quarter of all prisoners (24,896 interns) in the country will be released. The reason is that the cramped, unhygienic and overcrowded prisons pose an obvious danger of further spreading the corona virus. In Myanmar, it is tradition to give amnesty to thousands of prisoners in connection with the New Year’s celebration in April, but this year the number of released prisoners is unusually large due to the pandemic. Usually no or a few political prisoners are released in the mass amnesties. The whole country has been quarantined in an attempt to curb the spread of infection. Among the prisoners being released there are 87 foreigners who will be deported.

Hundreds of Rohingyans are released from detention

The charges against about 250 Rohingy people are being shut down for fear of the corona pandemic spreading in the country’s already overcrowded prisons where hygiene conditions are poor. Rohingyans (both adults and children) are in police custody suspected of violating immigration laws in connection with the military offensive in Rakhine in the fall of 2017. They are now released to reduce the risk of infection.

The first death in covid-19

Myanmar reports its first death in covid-19, the disease caused by the coronavirus. The deceased is a 69-year-old man who returned home from cancer treatment in Australia earlier that month.

The Arakanese army is stamped terrorist

The armed separatist group Arkanese Army (AA), which is fighting for self-government for the Buddhist people group Rakhine (Arakaneser), is branded terrorist by the Myanmar authorities. This makes it illegal to have contact with the group.

The military’s representatives in Parliament are voting, as expected, downplaying the NLD’s attempt to reduce the military’s political powers. For one year, the NLD has tried to implement constitutional amendments aimed at abolishing the seats in Parliament that are reserved for the military and which means that the military can stop all legislative proposals from the NLD.

The Internet is switched off in five districts

Authorities are blocking the internet in five districts in the states of Chin and Rakhine, where armed uprisings are ongoing and are driving people to flight.

US President Donald Trump imposes restrictions on entry into the United States for nationals from six countries: Nigeria, Myanmar, Eritrea, Kyrgyzstan, Sudan and Tanzania. In the past, Trump has done the same for citizens of Iran, Libya, Somalia, Syria, Yemen and North Korea as well as Venezuelan political officials. The decision, according to US authorities, is because these countries have been unwilling or unable to follow certain basic rules for, among other things, identity control, information exchange and public safety. The rules begin to apply on February 22 and the focus is on people who want to settle in the US, not just visit the country.

The UN Court calls for urgent measures against genocide

The government-appointed Commission (ICOE) goes beyond any previous Myanmar investigation when it finds that some individual soldiers were likely to be guilty of war crimes and serious human rights violations against Rohingya during the 2017 military offensive. the armed forces would have committed genocide. According to the ICOE, the war crimes consist in the killing of civilian villagers and the burning down of their homes. The conclusion that genocide was not committed is quickly rejected by, among others, Human Rights Watch (HRW) and by Rohingya organizations.

Chinese President Xi Jinping visits Myanmar and pledges billions of dollars worth of neighboring land. The money will go to the construction of a deep-sea port in Kyaukphyu in Rakhine on the west coast, a high-speed train to China and a modernization of Rangoon. At the new port, an economic zone for the clothing and food industry will be developed. Myanmar authorities say that Rohingy should be given priority when about 400,000 new jobs are to be added. All construction projects are part of the Chinese-Myanmar Economic Corridor (CMEC), which will be one of the most important parts of China’s infrastructure project New Silk Road (Belt and Road Initiative, BRI).