About 85 percent of Burkinians receive their livelihoods from agriculture and livestock management. Most of them live mainly on self-catering. In cities, too, many of them live outside the formal sector, for example through street trade.

There are no sure figures on unemployment, but few Burkinis have paid employment and even fewer work full time. Seasonal emigration to especially the Ivory Coast and Ghana, where the Burkinians usually work on plantations, is therefore extensive. However, economic problems and civil war in the Ivory Coast during the 2000s have meant that the emigration there has decreased significantly.

Wages are generally low. It is not possible to support a family on the set minimum wage. Many civil servants in Burkinis therefore work extra and have long working days.

About half of all employees are unionized. Despite the low number of employees, the trade union movement has long played an important social role and there is a tradition of relatively strong trade union rights. However, child labor is a widespread problem, as are some international companies that are countering trade union rights. 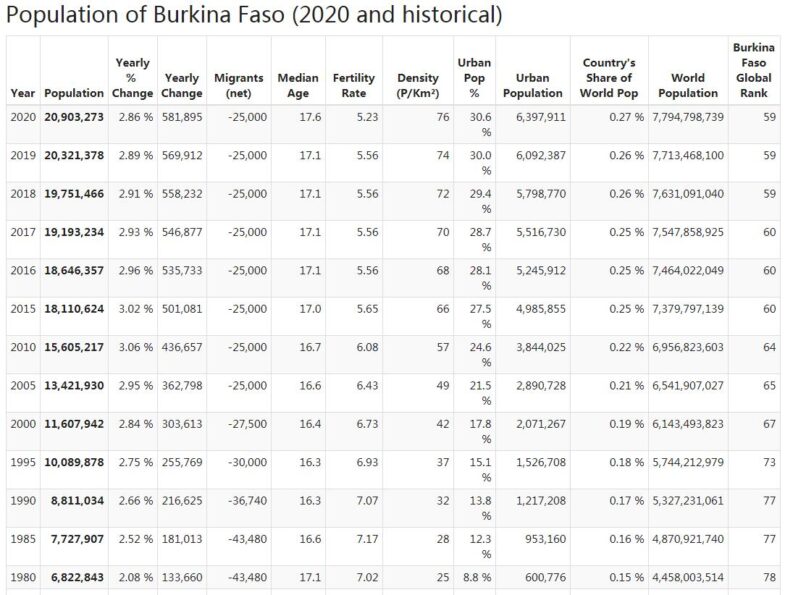 After a downturn in the 1990s, when emerging political parties partly took over the opposition role, the movement gained a boost in connection with the protests against the murder of the regime-critical journalist Norbert Zongo in 1998 (see Mass Media and Modern History). Growing dissatisfaction with the privatization of state-owned companies and low wages also contributed to union re-launch. In 2005 and 2006, major strikes were carried out that drove wage increases, better working conditions and a reduction in gasoline tax. In 2011, the trade union movement supported the student protests that forced the regime on the defensive politically and economically. The trade unions also participated in the revolt that led to the fall of the Compaoré government in 2014, including by announcing general strikes (see Current policy).

A former security minister in the Burkese Transitional Government, Denise Auguste Barry, is arrested. He is being questioned in connection with “attempts to destabilize the country”, a police source told AFP.

France promises to lift secret stamp on documents about Sankara

The secret stamp on French documents about former Burmese President Thomas Sankara, who was assassinated in 1987, is to be lifted. It promises France’s President Emmanuel Macron to visit Burkina Faso during a tour of Africa. Many Burkinians suspect that France was involved in the act (see also Modern History). Macron also promises a € 1 million support fund for small and medium-sized businesses in Africa. His visit, however, raises protests at the University of Ouagadougou. The protests are largely about the large contracts awarded to French companies in the region. The days before Macron arrived, a grenade attack was directed against a French military vehicle. Three people were injured in the act.

The five-nation G5 Sahel force formed to fight jihadism begins its work (see February and June 2017). Soldiers from Mali, Niger and Burkina Faso gather for a first operation in the border region where the three countries meet, French military reports. Mauritania and Chad are also part of the G5 Sahel. The plan is for the force to include 5,000 soldiers in March 2018.

The relatively newly formed Burkinian jihadist group Ansaroul Islam condemns the attack in Ouagadougou in August. They blame the attack on the al al-Qaeda -anknutna terrorist group Jama’at Nusrat al-Islam wal Muslimin (JNIM). Ansaroul Islam’s leader Ibrahim Malam Dicko criticized in particular that several prominent Muslims were killed in the act. Since the end of 2016, Ansaroul Islam has carried out a series of attacks in the northern Soum province, where militants, but also schools, villages and “wicked” people have been attacked. There are signs that Ansaroul Islam is approaching groups close to the Islamic State (IS).

19 people are killed and about 20 injured in a terror attack on a Turkish restaurant in Ouagadougou. The two assailants are shot to death by security forces. Half of the victims are foreign nationals and half Burkinians. Behind the attack is probably al-Qaeda in the Islamic Maghreb (Aqim). On August 15, two days after the attack, Malian President Ibrahim Boubacar visits Keita Burkina Faso and says the two countries stand united in the fight against jihadists. Later, sources at the security service say those who performed the deed probably came from Mali.

37 judges are accused of corruption

A commission of inquiry charges 37 judges for corruption. It is the first case of its kind in Burkina Faso. The judges are said to have acquitted suspected criminals of payment.

The UN Security Council adopts a resolution that marks the military force decided by the G5 Sahel states in February. However, there will be no direct UN mandate, as advocated by France. The United States considers that such a mandate is not needed as the force must adhere to the territories of the participating countries. The force will have its headquarters in Mali. According to plans, it will consist of 10,000 police and soldiers and be up and running by the end of the year. The EU has pledged EUR 50 million in support of the new force.

Five countries in the Sahel region, apart from Burkina Faso Mali, Chad, Niger and Mauritania, agree to create a joint force to fight the threat from jihadist groups. This happens after an attack in Mali in January, where at least 80 people were killed.