Lots of Bulgarians lost their jobs when state corporations were closed down or restructured in the 1990s. At the turn of the millennium, unemployment was almost 20 percent. Thereafter, it dropped significantly, and has since fluctuated.

Unemployment differs between different regions. In the southeast, where about half of the population are Bulgarian Turks, unemployment is far above the average in the country. Among the Roma, 70-80 percent go without work.

Many work in the large informal sector, which makes it difficult to calculate actual unemployment.

Wages are low, as are unemployment benefits. Working hours are regulated to 40 hours per week and the statutory holiday is at least 20 days.

The right to form or join a trade union and the right to strike are guaranteed. Only one in five employees are unionized and the number of members is increasing.

During communism, trade unions were merged into the Bulgarian trade unions central council, a mass organization subordinate to the party.

It was transformed in 1990 into an independent central union, the Confederation of Independent Trade Unions in Bulgaria (KNSB). It is an umbrella organization for 46 trade unions. However, the number of members has decreased: from just over 1.5 million in the mid-1990s to about 275,000 in 2012.

The trade union movement Podkrepa played an important role during the 1989 revolution and had ties to the bourgeois party UDF. Podkrepa claims to have 25 associations and 80,000 members in 2016, largely officials and academics. 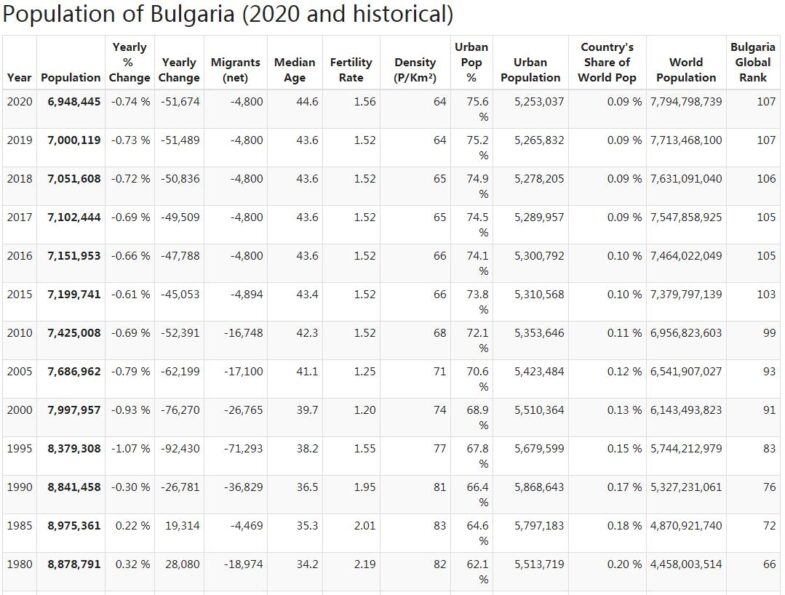 Although KNSB and Podkrepa have backgrounds in opposite political camps and KNSB has to a much greater extent opposed structural rationalizations, the two unions are now reported to cooperate well.

Discrimination in working life is prohibited, but still exists. The pay gap between men and women is large. Ethnic minorities are also discriminated against.

Forced labor exists despite prohibitions. Those affected are mainly rural women, usually belonging to one of the country’s minorities.

A new right part is formed

A new right-wing party is formed when three small Conservative parties, a new party for the Turkish minority and Bulgaria for citizens, led by former EU Commissioner Meglena Kuneva, merge under the term Reformist bloc.

UN alarm about the refugee situation

UN Refugee Agency UNHCR raises alarm that conditions for refugees in Bulgaria are a humanitarian crisis.

The President and the Prime Minister jointly appeal to the country’s residents to show tolerance and compassion for refugees. They make their rare statement following a wave of assaults on refugees from especially Syria. Amnesty International has appealed to the Bulgarian authorities to intervene in the growing xenophobia in the country. However, the government has just adopted a plan to quickly reject migrants. Shortly thereafter, in a joint statement, the Minister of the Interior, the Prosecutor and the Security Service condemned the right-wing extremist citizen patrols formed in immigrant-tight housing areas in Sofia.

The head of the refugee reception authority is dismissed for failing to deal with a sharp influx of refugees from Syria. Overcrowding and poor conditions in the country’s few refugee facilities have received criticism both internally and internationally.

The right-wing party Gerb interrupts a boycott of the work in Parliament that was initiated in connection with the crisis surrounding the appointment of Peevski in June.

Riot among protesters in Parliament

After 40 days of peaceful protests outside Parliament, riots erupt as the police force tries to escort hundreds of members, journalists and others out of the building. For many hours they have been prevented from leaving the parliament, which has been barricaded by the protesters. About twenty people are injured in clashes between police and protesters. European Commissioner Viviane Reding says she supports the protesters’ demands for reform of the Bulgarian judiciary.

No to annul parliamentary elections

The Constitutional Court rejects a request by the Gerb party to annul the parliamentary elections in May. The Court held that the irregularities that occurred did not affect the election result.

The criticism storm and street protests continue after the appointment of Peevski as head of the Danish security service three weeks earlier. Requirements are set for the new government to resign. President Plevneliev says that the only reasonable thing would be to announce yet another election, but it is not he, but Parliament, who has the power to decide on it. Protesters are starting to collect signatures demanding that the president be brought before national law.

Parliament approves the government’s appointment of media mogul Deljan Peevski as head of the security service Dans. The appointment is controversial because of his great influence over the Bulgarian media landscape. The Peevski family owns a number of newspapers, TV stations and internet sites. President Plevneliev says that the election of Peevski caused him to lose confidence in the government. The appointment is met by large protest demonstrations. Critics see it as a start in giving private stakeholders power over important state institutions. After a few days, the criticism storm causes Peevski to resign. The protests continue, and thousands of protesters in Sofia and other cities demand the resignation of the new government. The largest party, Gerb, says it is boycotting Parliament’s work so far.

After Borisov finds that Gerb cannot get a majority for a government, the mission goes to the Socialist Party. Former Finance Minister Plamen Oresjarski forms a ministry dominated by union experts with the primary task of seeking ways out of the economic crisis. The government is approved by Parliament with the support of the Turkish minority party DPS; Right Extreme Attack casts its vote. (29/5)

Gerb gets the most votes in the election, just over 30 percent, but loses about 8 percentage points since the 2009 election. The Socialist Party, with just under 27 percent – an increase of around 10 percentage points. The only other parties that can pass the threshold to Parliament are the Turkish minority party’s DPS (11 percent) and the right-wing Attack (7 percent). The distribution of seats will be 97, 84, 36 and 23 mandates, resulting in a deadlock – both Gerb together with Attack and the Socialist Party with DPS would receive exactly half of the 240 seats. Other combinations appear to be impossible. Voter turnout is just over 51 percent, the lowest since the communist rule was abolished. After all the previous scandals, the election itself is mostly correct according to OSCE observers.

Charges of cheating before the election

The day before the election, 350,000 fake ballots are found in a print shop whose owner is said to be close to the conservative former Gov. Gerb. The Socialist Party accuses Gerb of having planned extensive electoral fraud. Five opposition parties have announced that they have hired an Austrian institute to conduct a parallel voting. All elections in Bulgaria have been characterized by accusations of voting, pressure on voters and various irregularities. The European Security and Cooperation Organization OSCE sends 240 election observers.

Poverty in Bulgaria is now so deep and widespread that the European Commission devotes a special chapter to the country in its regular review of the state of supply in the Union. According to EU estimates, almost half the population, or five times more than the EU average, can be described as so poor that they risk social exclusion. The development is partly a result of the country’s very strict budget discipline, which has given Bulgaria a budget deficit of only 1 percent of GDP in 2012. However, the austerity measures have had severe social consequences, writes the European Commission.

the 13th of March

Diplomat Marin Rajkov is commissioned to lead a party-bound expert government until the May 12 elections.

Self-burning in protest of poverty

The mayor of Varna, the country’s third largest city, then resigns a man who lit a fire on himself in protest of the low standard of living. The mayor denies that he made some mistakes but resigns because he accidentally failed through self-burning. In recent weeks, Varna and all other Bulgarian big cities have been shaken by widespread protests against the poor living conditions. In a short time, three men die by self-incineration in different cities, a fourth suffering severe injuries.

The government resigns after protests

Prime Minister Borisov announces that he and the entire government will resign, five months before the regular elections. Since then, protests against increased electricity prices have passed into fierce clashes in Sofia between protesters and riot police; Borisov says he does not want to lead a government under whose rule the police beat people. A few days earlier, when the protests broke out, it was announced that Finance Minister Simeon Djankov would resign. Djankov has received international praise for tight economic reins. Under his leadership, Bulgaria’s budget deficit has been pushed down to only half a percent of GDP. But budget discipline has also resulted in severe financial hardship for a majority of the population.

A referendum on nuclear power

The vote will be held in accordance with a parliamentary decision in October 2012 and concerns whether a new nuclear reactor should be built. However, it does not produce a valid result; turnout is only 21 percent and 60 percent is what is required for validity. Of those who vote, a majority say yes to building a new reactor. The referendum is the first held in Bulgaria since democracy was introduced in 1989. It has been propelled by the Socialist Party who disapproves of a government decision of March 2012 not to build a new nuclear power plant.

The leader of the Bulgarian Turks’ Party, Ahmed Doğan, is subjected to an assault during a political meeting. A man points a tear gas gun at his head when Doğan stands in the pulpit, but the weapon clicks. The assailant is arrested and it later turns out that the weapon could not have killed even if it worked. In connection with the meeting Doğan resigns after 23 years as party leader, and is succeeded by Ljotvi Mestan.