The high growth in Botswana’s economy has not been matched by job growth. The profitable mining industry – not least the diamond industry – has few employees. Almost half the population is estimated to be outside the formal economy.

Among those who do not have formal employment there are many who work in the so-called black sector of the economy, with, for example, street sales, manufacturing of simpler goods or farming for self-catering. In addition, there are many uneducated women and young people mainly in rural areas.

Of those with formal employment, almost half are government employees, in the public sector or in government companies.

Registered unemployment has been around 17-18 per cent in recent years, but the real figure is expected to be considerably higher. There is also widespread underemployment. Among young people, unemployment is twice as high. Although the population is increasing more slowly due to the HIV/AIDS epidemic (see Social conditions), it is difficult for many young people who quit school to find work.

The statutory working week is 48 hours. Trade unions are allowed but occur mainly in the mining industry and among public employees, and to a certain extent among railway and banking officials. About one in five formal employees are expected to be part of a trade union. The Central Organization is called the Botswana Federation of Trade Unions (BFTU). Public servants were given the right to organize themselves only in 2004. Police, military and prison employees are not allowed to join the union. 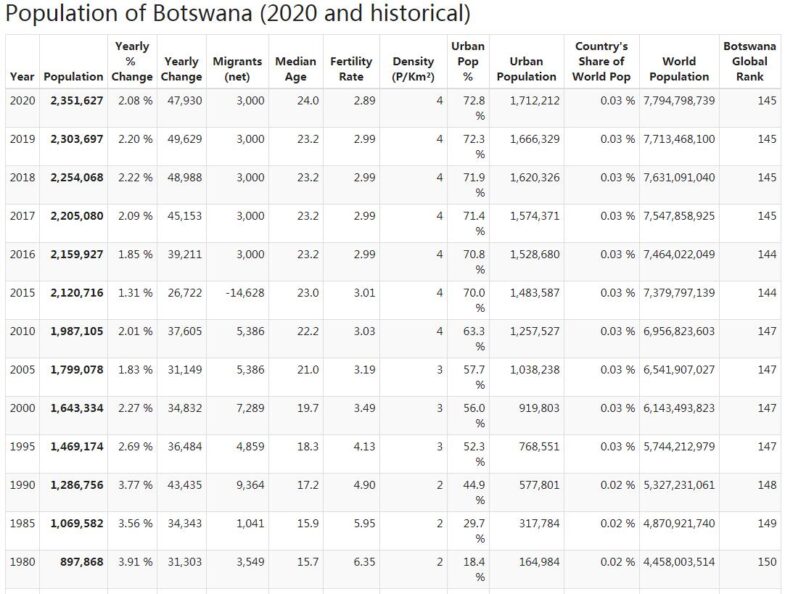 The right of strike is severely limited. Strikes are generally considered illegal. Normally, they are allowed only after extended mediation. Sympathetic strikes are prohibited. It was an unusual occasion when a labor market conflict erupted in April 2011, when almost 100,000 public servants went on strike demanding a 16 percent pay rise. The strike led to all schools being closed and many hospitals and health centers had to close or cut down on operations. The government deployed police and military to maintain community service, and was accused by the union of strike-breaking. After a two-month strike, the strikers were forced to settle for a 3 percent pay rise. About 2,500 healthcare employees were laid off and forced to apply for their jobs. Following the strike, the strike law was further restricted as several occupational categories, such as teachers and diamond workers, was classified as “necessary” and therefore subject to a strike ban. In 2013, the country’s highest court granted the government the right to dismiss 600 persons who held “important” services.

Botswana is experiencing the worst drought in 30 years and Parliament is adopting a special budget to be used for food for malnourished children and help farmers who have to slaughter their animals for lack of bait.

Botswana and 25 other countries agree on a new free trade agreement, the Tripartite Free Trade Area, which covers most of Africa between Egypt in the north and South Africa in the south. However, before the agreement can come into force, negotiations are required and the agreement is approved by the parliaments of the countries.