Unemployment is extremely high in Bosnia. The official figure has been above 25 percent since 2010, and for young people over 50 percent.

The difficulties in creating functioning institutions and economic growth in the country contribute to the high figures. Many highly educated people left Bosnia even before the war, and that trend has continued. It is especially young people who give up.

Behind the figures is also hidden a large informal sector, which is estimated to amount to about 30 percent of the workforce.

The right to form trade unions, enter into collective agreements and strike is statutory, but it appears that private employers do not respect the law. The trade union movement is weak. The country’s division into two entities makes it difficult to form national unions. In the Federation there is the federation KSBIH, which is a heir to the union that existed during the communist era. In Republika Srpska, the central organization is called TUCRS. 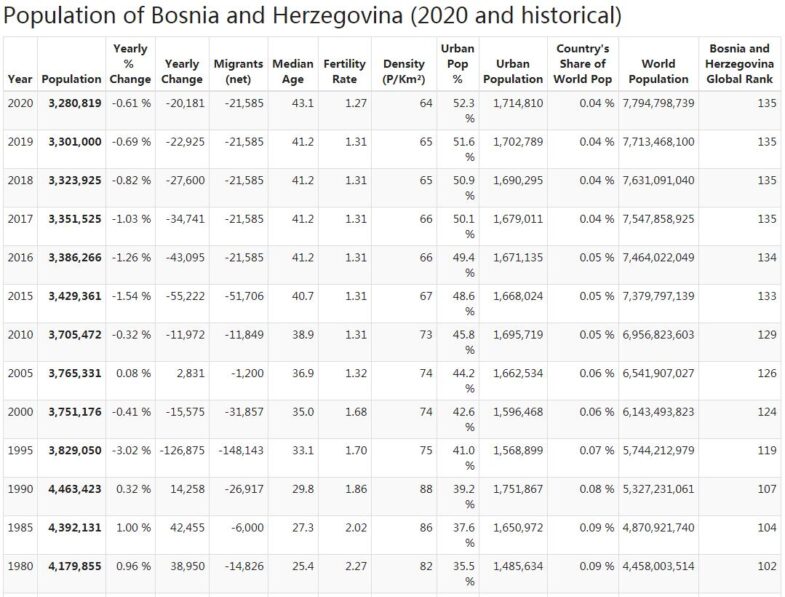 Milorad Dodik, Šefik Džaferović and Željko Komšić take office as the new members of the three-term presidency, following the October elections. Dodik, the Serbian representative, serves as president for the first eight months.

Željka Cvijanović takes over as new president of the Republika Srspka entity. She succeeds Milorad Dodik, who was elected as the Bosnian Serbs’ representative in the national presidency. Cvijanović, who belongs to the same party as Dodik, SNSD, is a former English teacher who has been Prime Minister of the Republika Srpska since 2013.

Bosnia is one of five countries to sign an agreement to work together to identify victims of the 1990 war in former Yugoslavia. Around 12,000 of the 40,000 reported missing after the war have still not been found, according to the International Commission for Missing Persons (ICMP), a non-profit organization that contributes in the identification work with DNA samples and information exchange. The ICMP chief calls the agreement an investment in peace and stability and notes that it is especially important in the current era of “populism and nationalism”. In addition to Bosnia, Kosovo, Croatia, Montenegro and Serbia are included in the agreement.

Prosecution is being brought against 17 people, including Bosnian general Atif Dudaković, for war crimes during the 1992-95 war. They are charged with crimes against humanity and murders of over 300 ethnic Serbs, persecution and neglect of civilians and prisoners of war, as well as destruction of 38 Orthodox churches and other religious targets. All suspects belonged to an army corps over which Dudaković commanded.

Elections in the nation, entities and cantons

Elections are held at both national level and in the entities, with mixed results. Milorad Dodik is elected to the Serbian seat in the three-headed Presidency at national level. Dodik, who is the leader of the SNSD and has been the president of the Republika Srpska since 2010, has distinguished himself with an increasingly aggressive nationalist rhetoric and defeats the much more moderate sitting Serb representative Mladen Ivanić. Bosnia’s seat in the presidency goes to SDA candidate Šefik Džaferović (incumbent Bakir Izetbegović could not stand for another re-election). The Croatian seat goes to Željko Komšić, who also held the post of Lauritz.com (then for the party SDP, now for DF). Komšić is considered more moderate than the seated Dragan Čović whom he defeats. The run-up to the election has been marked by nationalist rhetoric and frightening propaganda. In the election to the national parliament, the SDA remains the largest (9 seats), followed by the SNSD (6), HDZ BiH with allies (5) and the Social Democratic SDP BiH (5). A total of 14 parties take place in the national parliament, as well as in the federation’s parliament. In Republika Srpska, the candidate of the SNSD, the former Prime Minister Željka Cvijanović, wins the presidential election. The SNSD also remains the largest party in the Republika Srpska National Assembly.

The electoral movement will formally begin before the elections on October 7. In total, 53 parties, 36 coalitions and 34 independent candidates have been approved by the Election Commission. In the election to the presidency, six candidates stand for the Bosniaks, five for the Croats and four for the Serbs. The election also applies to the National Parliament (House of Representatives), the National Assembly of the Republika Srpska, the House of Representatives of the Bosnian-Croat Federation, and the parishes of the ten cantons of the Federation and of Brcko. The election is overshadowed by the fact that there is no legal basis for choosing a new people’s house (see July 2017).

Bosnia is promised a further € 6 million to cope with an increasing flow of migrants. It is a supplement to the € 1.5 million promised in June and will help the authorities provide the migrants with basic services, as well as strengthen border controls and combat human smuggling. Over 10,000 migrants are estimated to have entered Bosnia since the beginning of the year, along what is described as a new route through the Balkans for migrants trying to reach Western Europe.

The President of Turkey holds a general election

Turkish President Recep Tayyip Erdoğan holds in Sarajevo his first electoral speech outside Turkey ahead of the June elections. Many of the audience are foreigners arrested from other countries. The speech has been held in Bosnia since several EU countries, including Germany, Austria and the Netherlands, have refused Turkish politicians to hold elections. This has caused irritation between Ankara and the EU.

The Election Commission announces that elections at both national level and in the entities will be held on October 7. This is happening despite uncertainty about the formation of government in the Federation: the EU Commission and EU Foreign Minister Federica Mogherini recently called on Bosnian and Croatian parties to agree on changes in the electoral laws required after a ruling in the Constitutional Court. In one case, the court found that the mechanisms governing the election of delegates to the People’s House in the Federation (see Political system) are detrimental to Bosnian Croats.

Several people are injured and some are temporarily arrested in connection with police tearing down barricades as protesters built outside Tuzla. Veterans from the war of 1992–1995 have protested for several days, demanding higher compensation for, among others, those who are unemployed. They also require the establishment of a uniform veterans register to prevent “false” veterans from being compensated.