Formal unemployment is low in Bolivia, but underemployment is widespread and a large proportion of the population is completely outside the formal economy. Of the employees, just over one-fourth work in agriculture and just over one-tenth in the important mining sector.

At least two-thirds of the working population is estimated to be employed in the informal sector. More than half of this group are self-sufficient small farmers.

Of those who are employed in the formal economy, just over a quarter are union members. The right to form trade unions applies only to companies with at least 20 employees. Since a majority of the employees work for small companies, the majority are excluded from the unions. Collective wage negotiations usually take place with some government intervention.

The right to strike does not include public employees, but it is still common for teachers, care workers or bus drivers to go on strike. General strikes and solidarity strikes (when one union strikes in solidarity with another) are prohibited. Workers participating in an illegal strike can be sentenced to between one and five years in prison.

The new constitution from 2009 has strengthened the right of organization and collective bargaining rights of the unions, but several restrictions remain in the law. For example, only one union is allowed per company, and at least 50 percent of workers must approve the founding of the union.

During his presidency 2006-2009, the farmer leader Evo Morales remained chairman of the cocoa growers’ union, and he largely ran a union-friendly policy. At the same time, he was in serious conflict with the union for wage increases. In 2012, Morales unilaterally ordered a 10 percent increase for civil servants, which required 15. Strikes and protests then pushed the increase to 12 percent. 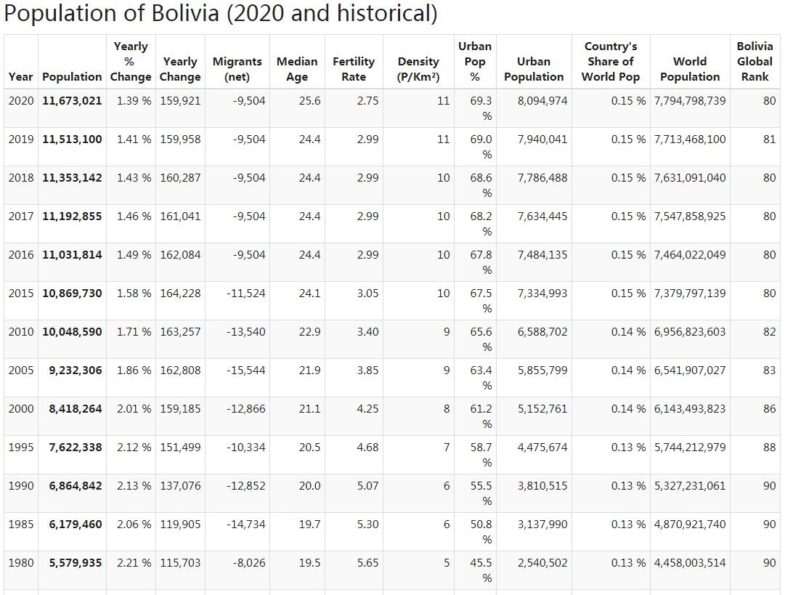 The Bolivian Workers’ Center (Central Obrera Boliviana, COB), dominated by the miners, was one of the strongest national organizations in Latin America in the 1950s and 1960s, and had a direct influence on government policy during the first years after the 1952 revolution. The military dictatorships then progressed hard against the labor movement, and a neoliberal economic policy was driven from 1985 and two decades ahead.

The change of government in 2006 meant that the COB again became closely allied with power, but the COB also led extensive demonstrations against the Morale government demanding, among other things, increased pensions. COB also organizes or collaborates with groups of small farmers, students, street vendors, women’s organizations and Native American associations.

MAS holds congress and decides to support a fourth term in office for Morales, despite the results in the referendum in February.

The government has declared that emergency is due to the worst drought in a quarter of a century. The drought has become acute in recent weeks, causing water shortages in seven of the ten largest cities. Rationing occurs and in some places water is poured into tankers. The emergency situation releases funding at both national and local levels to deal with the crisis. The authorities in three regions decide that the school term should be completed two weeks in advance.

The Catholic Church criticizes the government

The church says that “all the voices” that go against President Morales and MAS are subject to persecution.

Several dead in a mining strike

The government states that Deputy Interior Minister Rodolfo Illanes has been killed by striking miners in Panduro south of La Paz. Illanes and his bodyguard must have been removed at a roadblock. Two miners were shot dead by police and over 100 were arrested in connection with the roadblock erected two days earlier. The striking workers object to a bill and demand more mining licenses, the right to work for private companies and more trade union influence. Members of a national coal mining cooperative, Fencomin, have been carrying out extensive strikes and blockades for several weeks. The strike has largely paralyzed the country. Not least, the transport sector has been affected and dozens of police are reported to have been taken to hospitals following clashes with protesters.

President Morales inaugurates a new “anti-imperialist” military academy that he says will be a response to the US academy that has long offered military training to Latin American government representatives (Western Hemisphere Institute for Security Cooperation, formerly known as the School of the Americas). The new academy will “challenge the cultural, ideological, political and economic dominance and capitalist structure of the empire,” according to the president.

The President tweets that Chile is characterized by “neo-colonial racism”. The background is that Bolivia’s Foreign Minister David Choquehuanca, who is aymara, intends to inspect two ports in Chile where Bolivian truck drivers say they are poorly treated. Chile’s foreign minister has said that Choquehuanca can visit the ports, but in that case it will be as a tourist and not as a minister, causing Morales to collapse.

Increasing conflict between unions and government

COB launches a third strike in nine days, in protest of the government’s decision to close a state textile company, Enetex, leaving 800 people without jobs. The previous strikes lasted for one and two days, respectively; now begins a three-day strike. Violent clashes between police and protesters have occurred in Cochabamba and in several other places in connection with the strikes. The COB is trying to persuade the government to start a dialogue on the closure. This is the first time since 2009 that COB is organizing a major strike. Relations with the government had otherwise improved in recent times.

According to the president, the neighboring country has set up a military base near the border, despite it, according to him, violating international norms. Chile denies that any base has been set up. However, patrolling in the area in question has been increased, to protect civilians from drug traffickers and bandits, it says.

Water conflict with Chile to ICJ

A relative of Zapata states that the son she had with Morales in 2007 did not die as previously stated, but lives somewhere in the country (see also February 3, 2016). The president says if that is the case, he wants to meet his son. Morales is unmarried but has two children from previous relationships. Later, however, the information that the son is alive is rejected and eventually a court finds that they are not correct.

Voter no to double re-election

Voters say with little margin no in a referendum to allow presidents to stand for re-election twice. That would allow for three terms of office on the rake (which for Morales would mean four periods, since he had previously claimed that the first re-election would not count). More than 51 percent vote against the proposal.

Six people are killed and ten injured by smoke poisoning when demonstrating Morales supporters break into the mayor’s office in El Alto. The suburb of La Paz is traditionally a strong government stronghold but is now ruled by the opposition.

A local TV channel reports that President Evo Morales had a relationship with an 18-year-old woman in 2005-2007 and with her had a son, who died at an early age. Morales confirms the information but denies that he would have helped the woman, Gabriela Zapata, get a top job at the Chinese construction company CACM. However, the opposition accuses the president of not only arranging the job for Zapata but also arranging several very lucrative government contracts for CACM. A few weeks later, Gabriela Zapata, arrested for money laundering and embezzlement, was arrested.