As for religious affiliation, the figures vary depending on the source. In addition, there is the fact, which seems strange to us, that for many Beniners it is not a contradiction to be a Christian or a Muslim and at the same time to make a sacrifice to a Vodoun. According to data from the American ARDA – Association of Religion Data Archives from 2010, 43.8% of the population of Benin were Christians (of which the Catholics alone are the most important group with 27%), while 30.4% belong to Vodoun and other traditional African countries Cults, 25.5% Muslims (Sunnis) and 0.3% members of other communities or without religious affiliation. The results of the last census in 2013 in Benin the following proportions of respective religious affiliations show: Christians: 48.5% (Catholics: 25.5%; Church of Heavenly Christianity (Eglise du Christianisme céleste): 6.7%; Methodists: 3.4%; other Protestant churches: 12, 9%); Muslims: 27.7%; Voodoo: 11.6%; without religion: 5.8%; Others: 6.4%. The constitution guarantees freedom of religion and is respected by the government.

The Roman Catholic Church began its missionary work in Ouidah as early as 1680. The Catholicism is now the most important Christian denomination in Benin with a clear focus in the south. English Methodists began missionizing in 1843, but they also focused on the coastal population. Other Protestant churches are, for example, the Assemblées de Dieu, the Baptists and the church association “Union des Eglises Evangeliques du Bénin” (UEEB) founded by the international mission society SIM. Another important church is that of the ‘Heavenly Christians’ (CCC Celestial Church of Christ) with beliefs from the Yoruba worldview. Founded in Porto Novo in 1947, it now has over 10 million followers in many West African countries, but also in Europe, Canada and the USA. In the 1960’s, a small Bahá’í community established itself.

A phenomenon of the last few years have been the fundamentalist, sometimes very aggressive, Pentecostal and / or charismatic churches or sects. At first it was radical fundamentalist sects from the USA who proselytized in West Africa, but now there are more and more African ‘churches’ from Nigeria that have developed a very prosperous business model and that have enjoyed enormous popularity.

According to homosociety, one last foreign visit paid a pope Benin with Pope Benedict XVI. 2011, while his predecessor Pope John Paul II visited the West African country in 1982 and 1993. In April 2015, Pope Francis received a delegation of Benin bishops and encouraged them to continue the dialogue with Islam, and a few weeks later an international symposium was held in Cotonou to promote interreligious dialogue in the common fight against Boko Haram.

The West African form of Islam differs in many ways from Islam in Arab countries. Islam in Benin was spread by Muslim traders (Dendi) from Mali and Niger who were in contact with the Islamic Manding traders (Malinké, Bambara, Dioula) through the trade in kola nuts and gold. In 1962, 7% of the population was Muslim, in 1992 20%. Umbrella organization of the Benin Muslimsis the Union Islamique du Bénin (UIB), but due to its inhomogeneity it only exists on paper. It was founded in 1980 to better control the individual communities in the Islamic centers of Benin such as Djougou, Parakou, Nikki, Kandi and Porto Novo, which today have a relatively large political autonomy. The Islamic community in southern Porto Novo did not develop until the 19th century, mainly through Yoruba and Hausa traders from today’s Nigeria.

There are innumerable Koran schools in Benin, the main objective of which is to teach students between the ages of 5 and 20 years to read the 114 chapters of the Koran and to be able to recite some of them during prayer. From 1950 the “écoles franco-arabes” were financed and equipped by Arab-Islamic institutions from northern Nigeria, Sudan, Egypt and Saudi Arabia. Graduates from the Islamic University of Medina in Saudi Arabia have also been working as teachers since the mid-1960’s, and since 1970 there have been many Beniners with degrees from Arab universities. 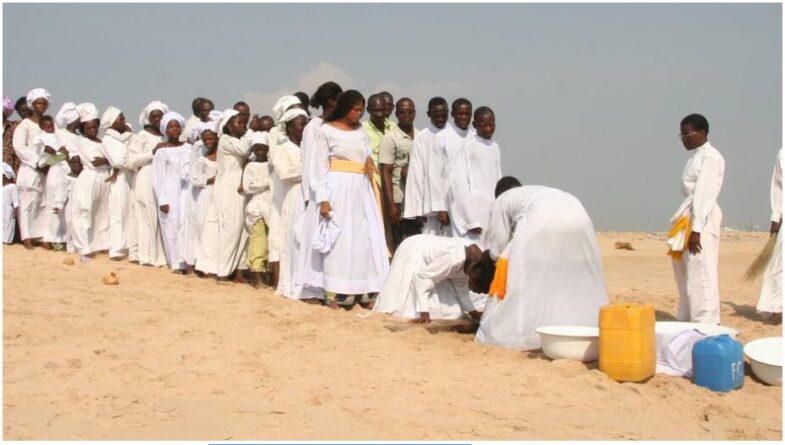 Vodoun, syncretism and the social significance of religion

Benin is also often referred to as the ‘cradle of Vodoun’. The various Vodoun cults are mainly located in the southern third of the country and have a permanent place in the everyday life of the population. If you walk through the villages with your eyes open, you will find traces of religious practice almost everywhere: altars, shrines, sacrificial sites, legbas (anthropomorphic clay figures), temples and signposts to the priestesses and spiritual healers. A rusty engine block lying by the wayside is not an environmental sin, but an altar for Gu (Ogun), the god of iron and the forge. In all the different Vodoun cults, women play a dominant role among the initiates and men are more in the minority.

Mami Wata, the sea goddess with the fish belly is a new, extremely successful and dazzling goddess of the Vodoun pantheon. She laughs, is happy and likes to play jokes. In her cult different gods and rituals are combined and she embodies the modern, urban life with the individual abilities and the promises of success, power and sexuality.

The Fon, Yoruba and some Ewé groups have an elaborate twin cult. Parents replace their deceased children with wooden figures that must be carefully stored and cared for if their power of blessing is not to be lost.

Beliefs and gods of Vodoun have been changing constantly since they went into exile with the slaves in America and mixed with other religions (Christianity and Hinduism) there. This amalgam was brought back to the West African coast by the returning ‘Brazilians’ and was once again mixed with the old African gods and cults. Transatlantic connections between Africa, America and Europe made the Vodoun a globalized religion. Today Vodoun is a recognized religion in Benin with its own public holiday, January 10th, and the international Vodoun Festival held in Ouidah for the first time in 1992 has now established itself as an important social institution that also attracts international visitors. Vodoun festivals are also held in various other places, such as B. in Savalou.

Vodoun is a religion that we became more familiar with through trivial myths (Hollywood films), and often has nothing in common with local reality. The Benin-born actor Djimon Hounsou is planning a documentary about Vodoun, doing extensive research to understand the powers of Vodoun. The python enjoys a special veneration and in some regions there is a python cult with its own temple. However, the snake temple in Ouidah has degenerated into a dubious tourist attraction. The dancer and choreographer Koffi Kôkô, who also performed in Berlin and conducted workshops, is also a priest of a Vodoun temple in Benin.

Religious information should always be viewed carefully. Syncretism is characteristic of all religions in Benin. According to this, all Beniners assign themselves to an ‘official’ religion in a referendum, since after all they are only given one option. In fact, however, many Beniners follow traditional spiritual and religious practices and at the same time refer to themselves as Christians or Muslims. As in other parts of Africa, witchcraft discourses are very present in the everyday life of a large part of the Benin population. When they are ill, many people do not believe that they have been infected by a virus, for example, but are firmly convinced that a disapproving relative or neighbor has sent them the disease. Also inDealing with death, ghosts and other powers play an essential role.

A particularly cruel ritual practice, which is related to the local witchcraft belief, can be found in northern Benin. In the countryside, babies and toddlers are ritually murdered there if they are suspected of being witch children (enfants sorciers). For this suspicion it is sufficient, for example, that a baby is born feet first, shoulder appears first, etc. Small children are also killed if, for example, the teeth grow in an unfamiliar order or other certain developmental characteristics or disabilities apply. However, there are some NGOs, representatives of the Christian churches and some journalists from local radio stations who are trying to raise awareness and fight against the ritual murder of children.