In the recent past, the conflicts between the Kérékou camp on the one hand and the Soglo clan on the other have mostly polarized the Beninese public. The conflicts are – viewed greatly simplified – to be seen against the background of regional and cultural differences between North and South Benin. The changing coalitions of both camps with politicians from different subregions (especially the southwest and southeast) also show, however, that political camps in Benin cannot be reduced to a simple north-south contrast.

During Boni Yayi’s two mandates (2006-2016), the image of political culture, which had remained the same for many years, began to move. Boni Yayi is also regionally (in North Benin) rooted and political lines of conflict continue to be based on ethno-regional borders. Beyond these classic arguments, Bonis Yayi’s authoritarian political style sometimes met resistance in the fight against corruption.

After taking office in 2006, Boni Yayi did not shy away from trials of strength. Influential businessman and MP Séfou Fagbohoun, former owner of the privatized oil company SONACOP, was also charged with embezzlement and corruption offenses at the instigation of the government. Another businessman and politician, Issa Salifou, has been charged with tax evasion by the government. Since both were MPs, a dispute over immunity and prosecution took place. After much back and forth, Sefou Fagbohoun was allowed to leave for France in July 2007 to receive medical treatment there. Issa Salifouthe allegations could not yet be proven, in the meantime he moved to the presidential camp, but since the local election campaign in 2008 he has competed with the president with the new “G13” list. The corruption scandals have not diminished under Boni Yayi, not least because of little or no prosecution. Under Patrice Talon too, corruption in Benin remains a major problem for the country’s development. In the new ranking in the Corruption Perceptions Index for 2018, published by Transparency International on January 30, 2019, Benin ranks 85th out of 180 countries (same place in 2017, published at the beginning of 2018). Further information on corruption can be found under Afrobarometerand Transparancy International. Former mayors of Cotonou and Ouidah, Léhady Soglo and Séverin Adjovi, were sentenced to 10 and 7 years in prison, respectively, for financial embezzlement (Soglo) and tax fraud, money laundering and fraud (Adjovi).

According to computergees, the parliamentary group “G13”, which initially consisted of 13 members, was next to the “Union fait la Nation (Un) the most important perceptible opposition movement to President Boni Yayi and his” Kauri forces “. However, the group is more than an alliance of purpose Since it was shaped by very different people, such as the rather dodgy Rachidi Gbadamassi, the businessman Issa Salifou or the sociologist Nassirou Bako-Arifari. A clear political program apart from the criticism of the authoritarian style of Boni Yayi has also not yet been possible The skepticism about the president’s tendency to rule through authoritarianism, rashly make legally untenable assertions and in some cases disregard powers, must be taken seriously.In April 2009 the G13 opposition was resigned by one of its main characters,Rachidi Gbadamassi, weakened. Of course, this unexpected political coup gave way to rumors of bribery in this context. In any case, Boni Yayi was strengthened by these events.

In October 2014 the movement “Mouvement pour le suraut patriotique” (MSP) was founded in Cotonou as an opposition to Boni Yayi. In the run-up to the parliamentary elections, there were rough clashes between the forces supporting the incumbent president and the opposition. In March 2017 another movement was founded, the ‘Frond pour le sursaut patriotique’ (FSP), which aims to act against Patrice Talon’s intention to change the constitution.

Boni Yayi had fought another test of strength with two cell phone companies, Moov and MTN-Areeba. Due to acquisitions of both companies, license fees had become due that Moov and MTN refused to pay. As a result, their licenses from July 2007 were temporarily withdrawn and almost 1 million Beniners could no longer be reached by telephone. In September 2007, the government finally won this power struggle.

The subsequently withdrawn proclamation of six “chief lieux de département” provided further political explosive. The question of which locations would become the regional capitals for the six new departments created in 2002 has remained open since then, as it is linked to ethnic and political tensions. The publication of the list by a government official immediately sparked demonstrations and local violence, until it was “temporarily” withdrawn.

The businessman and current President Patrice Talon was accused of having carried out or instigated a poison attack on President Boni Yayi. He was arrested in Paris and released on bail. This resulted in a legal tug-of-war between Paris and Cotonou, which had requested extradition. Finally, Boni Yayi forgave his adversary.

Patrice Talon has been the new President of Benin since April 6, 2016. The power struggle is very noticeable under his government. In the past two years, Benin has had a large number of politicians and business people who have left the country (Valentin Djènontin, Fatoumata Amadou Djibril, Sébastien Ajavon, Komi Koutche, Idrissou Bako,…). Lionel Zinsou, the prominent opposition politician of Benin, former prime minister and candidate for the presidential election in 2016, was sentenced on August 2, 2019 to a 6-month suspended sentence and a five-year ban on standing. 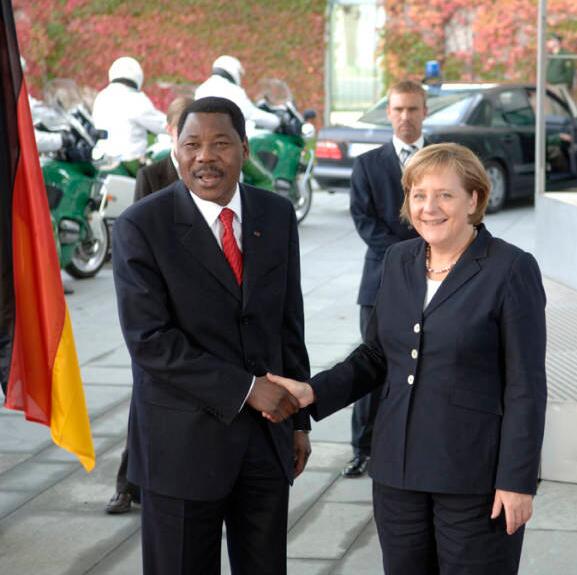