More than half of the Beninis work in agriculture and are not unionized. Nor are those employed in the large informal sector of the economy. The many government employees, on the other hand, are usually in the union.

Nowadays, fundamental trade union rights are constitutional, although the right to strike is somewhat limited. The central organization UNSTB (Union nationale des syndicats de travailleurs du Benin), was the country’s only authorized trade union under the Kérékou dictatorship in the 1970s and 1980s. Today there are another handful of central organizations.

Trade unions are an important political force. They contributed to democratization in the early 1990s and later, through strikes, among other things, succeeded in stopping several government initiatives, including an attempt to postpone the 2006 presidential election (see Modern history), and in the summer of 2011 they managed to force a 25 percent increase in the salaries of government employees. The police’s brutal actions against a union-organized demonstration at the end of 2013 led to a general strike in protest and several unions carried out strikes in 2014. 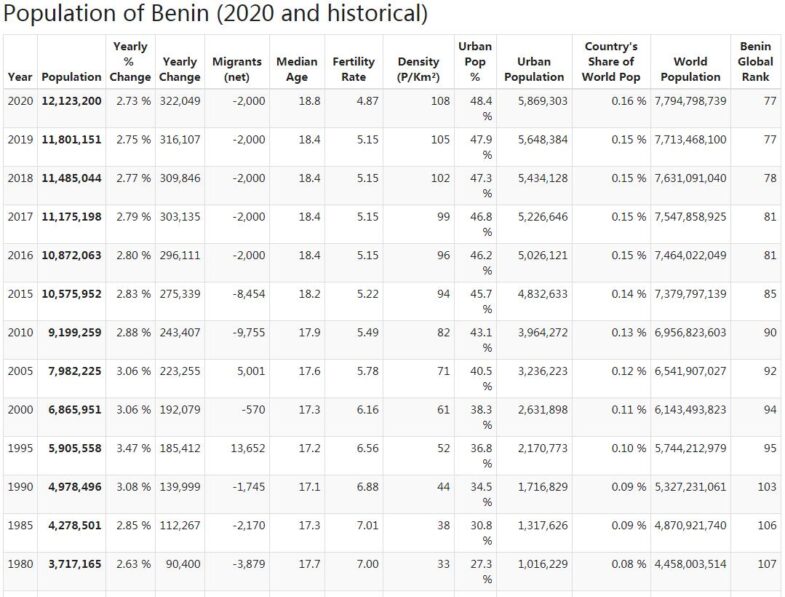 In spring 2013, the statutory minimum wage was raised to just over SEK 500 a month. In the informal sector, most people earn less than the minimum wage.

The official unemployment rate is low.

Opposition politician Sébastien Ajavon is sentenced in his absence to 20 years in prison for drug offenses. Ajavon’s lawyers describe the trial as “absurd and false.” Company manager Ajavon, who is in France, came third in the presidential election in March 2016.

Basic reforms are laid on ice

President Talon puts the attempts to change the constitution on ice. The reason is that he now thinks that a referendum on constitutional amendments would be too expensive and that it is not a priority issue. Since the National Assembly, in a vote, said no to the constitutional amendments, a referendum is needed to implement them. Among the proposed changes are to abolish the death penalty and increase women’s representation in the National Assembly.

The FCBE alliance is re-formed into a party

The parties that are part of the country’s largest political group, the Cauri forces for a prominent Benin (FCBE), decide to transform the alliance into a party.

Dialogue should stop the strike wave

Following a meeting with President Talon, the workers’ side reports that progress has been made in attempts to resolve the conflict that has led to widespread public sector strikes. The government appoints a commission to look more closely at trade union requirements.