As in most coastal states, Benin’s coastal region is one of the most densely populated areas. Almost half of the country’s population lives here on a tenth of the country’s area, which protrudes 100 km inland, and the trend is rising. Conflicts of use, socio-economic and ecological problems are the consequences. Scientists from the University of Frankfurt compiled a report on the conservation of biodiversity through zones of special ecological importance. The Federal Ministry for the Environment, Nature Conservation, Building and Nuclear Safety (BMUB) is funding a cross-border Mono-Delta biosphere reserve between Benin and Togo.

Characteristic of the straight coastline are the wide sandy beaches, which remain almost constant in area due to the rapidly falling sea depth and the resulting low effect of the tides. Behind the sand spit there is a complex system of swamps, lagoons, river valleys and lakes, such as Lac Nokoué near Cotonou, which is used a lot by lagoon fishermen. The lagoon waters running in an easterly direction reach the open sea at Lagos, Nigeria after about 100 km. French scientists discovered an endangered species of the finch here. The vegetation here mainly shows coconut and oil palms as well as a mosaic of intensified useful plants (e.g. vegetable growing).

Behind the lagoon system, the land gradually rises to a plain, the Terre de barre. Height differences of 20-40 meters near the coast up to 250 m in Abomey 130 km to the north characterize the plateaus behind the lagoons. They are separated by the lama forest in the center (from the Portuguese word for mud), as well as by river valleys and marshland. Further north, in the center of Benin, are the beautiful granitic island mountains. Mainly in the Dassa region, the largest city in the area, these hills (les colines) protrude from the dry forests. The rocky terrain makes access to drinking water difficult because drilling is tedious here. This area is dominated by dry forests and savannahs. The wildfires that are started during the dry season, for hunting purposes or to encourage grass growth, have a strong impact on this vegetation. A large part of the small forest stand fell victim to the clearing. Today agricultural areas shape the picture, such as oil palm forests, coconut palm groves, banana and pineapple plantations. From Savè you can find the cashew plantations, the importance of which increases up to approx. Djougou and Ndali.

In the north-west of Benin, the Atakora range is the only mountain range in the country. The highest point in the country is Mount Sokbaro at 658 m, close to the border with Togo. The Atakora Mountains rarely rise above 600 m and are mainly composed of quartzites, which leads to nutrient-poor soils. It follows in an easterly direction the Pendjari Lowland, in which the famous Pendjari National Park is located, and flows into the plain of the Niger River, northeast border area to the country of Niger. The typical vegetation here is the wet savannah, which gradually becomes dry savannah in the north. In these regions are the baobab trees, néré trees (Parkia biglobosa), Shea butter trees (Vitellaria paradoxa) and the large cotton plantations of Benin.

According to a2zgov, Benin has five major river systems: the Pendjari and its tributaries, the rivers that flow into the Niger and the Ouémé, Couffo and Mono that flow into the Atlantic. In the northwest, the Pendjari flows in a large arc through the Département de l’Atacora to Togo, where it is called Oti and finally flows into the Volta in Ghana. In the northeast, the Mékrou (410 km in length), the Alibori (340 km) and the Sota (250 km) are the most important tributaries of the Niger, which forms the border between Benin and the Republic of Niger for around 120 km. The Ouémé, whose entire catchment area is located in Benin, is the longest river with 510 km. Its main tributaries are the Okpara (200 km) and the Zou (150 km). The Ouémé flows into the Atlantic, in the Bay of Benin. The Ouémé catchment area represents a huge potential for the development of Benin’s agriculture. The areas along the Ouémé River in the south and the Niger River in the north are often affected by floods, exacerbated by the effects of climate change, which destroy agricultural production and infrastructure. In the southwest the Mono for 100 km the border between Togo and Benin and flows into the lagoon of Grand Popo. A cross-border biosphere reserve between Togo and Benin is being created on the lower reaches and in the delta of the Mono. 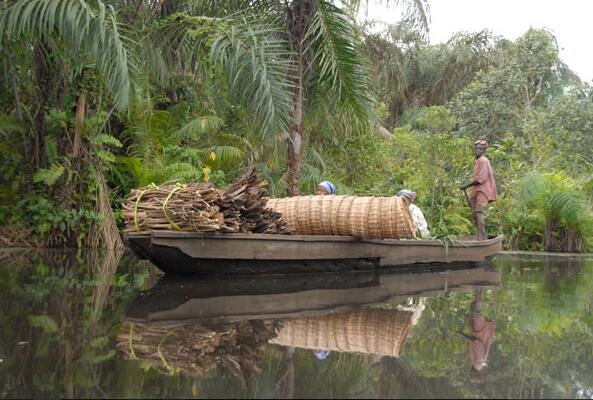 In terms of climate, Benin can be divided into three zones:

Weather information and other information on the climate are provided by interactive graphics on seven locations in Benin. With climate change, which is also noticeable in Benin, the amount and distribution of rain are becoming increasingly unpredictable.