According to naturegnosis, Benin is characterized by an extraordinary ethnic, regional and linguistic diversity. There are around 60 different peoples who have retained their own languages and cultural identity to this day. The map of the ethnic groups of Benin shown here provides an initial overview of the spatial distribution of the ethnic groups, with marked disparities in population density. About two thirds of the total population live on just 15% of the state’s land in the south.

As in almost all West African countries, due to the arbitrary colonial demarcation, many of the ethnic groups in Benin also live in two or even more states.

In the publications of the results of the 2002 census (the ethnic groups were no longer shown in the 2013 census), the 61 ethnic groups counted were grouped into the following large groups:

▪ Other ethnic groups (including Europeans, Lebanese): 1.6%

Most of the migrants in Benin come from neighboring countries, 34.8% of them from Niger, 22.1% from Togo and 20.5% from Nigeria. It is mostly men who come to the country as migrant workers.

Detailed information on the linguistic diversity of Benin and its classification in the major African languages can be found on the websites of the two Christian American NGOs SIL International (Ethnologue) and the Joshua Project, where language samples can be heard and photos can be seen. The figures given there about the speakers of the respective language have to be put into perspective insofar as the multilingualism of the majority of the Beninese population is not taken into account there. For example, the Dendi, a Songhai dialect (e.g. Ethnologue: 30,000 speakers), with the exception of the Atakora Mountains, is the market and lingua franca of the entire north.

The government started an initiative in October 2013 to introduce the national languages as the language of instruction in primary schools. According to the Francophonie, the official language of French was spoken by 3,821,000 people in Benin in 2018, which corresponds to 33% of the total population. 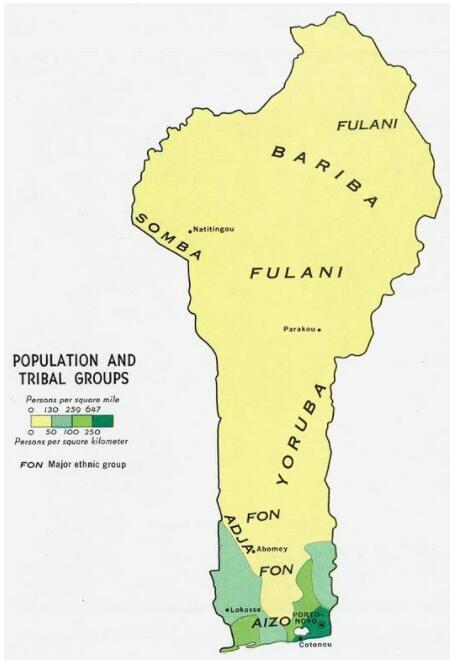 According to the constitution, women and men are equal in Benin, but in practice it looks a little different. The polygamy was officially abolished of 2004. Nevertheless, one finds large families in which men have several wives, especially in rural areas. Family planning is almost unknown in this milieu. When it comes to education, too, the number of illiterate women is very high and despite the government’s awareness and commitment, women still suffer from the consequences of genital mutilation. In Benin, 9% of girls and women between the ages of 15 and 49 are circumcised. The marriage of underage girls is also problematic: almost a third of girls are married before their 18th birthday and 11% before their 15th birthday. During the first mandate (2006-2011) of President Yayi Boni, the “Education for All” campaign led to a sharp increase in the enrollment rate for girls.

Due to the ethnic and cultural diversity of the country, there are also regional differences with regard to the gender ratio. In the north of the country, women are generally less represented in important positions and higher occupational classes. Also in the National Assembly (Assemblée nationale du Bénin) only a few women are represented.

To understand gender roles, it is also important that women and men in practically all households have separate budgets and operate in a highly individualized manner. Statistics and studies on economic issues, which are collected on a household basis, therefore describe the complex reality of local economic activity only very inadequately. Very often the spouses have no idea what their partners are making.

For many peoples of West Africa it is not unusual that children do not grow up with their birth parents but with foster parents. The social anthropologist Erdmute Albers researched this custom among the Baatombu in several villages in Northern Benin. Unfortunately, many children, especially in poor and rural households, still have to work hard to support their families. The UN expressed concern about the situation of children in Benin, where, in addition to child labor, so-called ‘ghost children ‘ are still being killed today. A small abnormality at birth, such as a harelip or something similar, is often enough. The West Africa Network for Peacebuilding – WANEP launched an awareness campaign against violence against girls and women. UNICEF started an awareness campaign against child weddings and received support from Angélique Kidjo and other artists.