The Beninese economy is mainly dependent on agriculture and trade with neighboring countries. In the industrial sector, only cement production, processing of cashew nuts and pitting of cotton are worth mentioning.

The manufacture of simpler consumer goods or the textile industry play a subordinate role. In recent years, industrial gold production has increased and the production of crude oil is imminent.

Around two thirds of all Beniners work in agriculture and generate around one third of the gross domestic product here. Cotton is the main export good and therefore has the most important place in the Beninese economy.

As a transit country, Benin benefits mainly from the port when trading goods. Due to the upgrading of the ports of Lagos in Nigeria and Lomé in Togo, competition for the port in Cotonou has become very fierce. The Beninese government has privatized the port’s administration to improve its services and, above all, to fight corruption. The company Port of Antwerp International (PAI) was commissioned by Benin for 10 years to modernize the port. Goods such as used cars are traded from Cotonou to Nigeria, Burkina Faso, Niger and Chad. However, due to the corrupt network of the port system, exact figures are difficult to determine.

It is estimated that 90% of the economic activity in Benin attributed to the informal sector. Roadside trading, gasoline smuggling and other activities are not recorded in any official statistics. As a result, the state loses important income, but the informal sector ensures a kind of basic supply. However, the government no longer wants to accept the estimated annual tax loss of 120 billion francs CFA and has declared war on gasoline smuggling; a new law was passed in June 2018 (Loi 2018-15).

According to dentistrymyth, Benin’s energy supply is still very much dependent on solid fuels such as firewood and charcoal. The state of the Benin economy is described by the economic profile of the World Bank in its ” Doing Business Ranking ” 2019 (153rd place out of 190 countries) for Benin, while the Index of Economic Freedom 2019 places Benin in 127th place out of 180 countries examined, and Benin is therefore in the category of ‘mostly unfree’ countries falls. Afrobarometer’s economic study focuses on the perception of the Beninese and Beninese and the profile of the Beninese labor market also provides information about the informal sector. 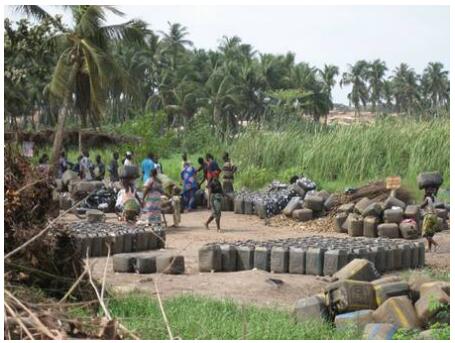 The agricultural sector in Benin shows climatic differences in the production methods in the south, in the central part and in the north. Agriculture across the country is very vulnerable to climate change.

In the south, the most important annual crops are maize and cassava. The permanent crops are coconut palms on the coast and oil palms further inland. The cultivation of pineapples for export has increased in importance in recent years. All annual crops are grown in the center and the cashew plantations are currently growing in importance. Yams is the most important tuber there and in the north. Millet (sorghum and pearl millet) is the country’s most important cereal after maize and a staple food in the north. Rice continues to play a subordinate role in grain production. In Atacora and especially in the Boukoumbè commune, the type of grain “Fonio” (fonio millet, finger millet) is grown. Fonio is gluten-free and high in protein. Fonio (Digitaria exilis) is one of theoldest cultivated grain in Africa (5,000 BC) ”

Agriculture in Benin is predominantly subsistence agriculture and market-oriented for certain productions (pineapple, cashew nuts, cotton, corn). Yams, rice, maize and cassava are mainly marketed in the Beninese cities, but also to Niger (especially gari, tapioca cassava derivatives) and Nigeria. For many women, the processing of food is an important source of income (peanuts, cashews, cassava, yams, palm oil, etc.). The Songhai Centers and CPEAS(Center de Promotion de l’Entreprenariat Agricole) in Benin are currently the most important agricultural training centers. You do without pesticides and artificial fertilizers and feed all waste back into the production cycle. A short film introduces one of the Songhai centers, which have since found a number of imitators.

The young entrepreneur Togbédji Ahokpa, who lives in France, developed the product ‘Les Sérégales’, a yoghurt made from millet and milk, from the Beninese ‘dèguè’ and sells it successfully in France.

In February 2017, Patrice Talon’s Beninese government created a new agency (Agence Territoriale de Développement Agricole – ATDA), which is responsible for regional agricultural development but also for the development of certain value chains at national level. The ATDA is divided into a total of seven regional poles. Each pole has to promote certain value chains, e.g. pole 4 has the task of diversifying cotton, promoting subsistence agriculture, the cultivation of cashew nuts and agrosylvopastoralism, and pole 2 deals with cotton, maize, sorghum and animal husbandry (cattle, sheep, Goats, poultry farming).