The population density in Benin is very unevenly distributed. The further north you go, the less populated the country is. Of the around 10 million people living in Benin, two thirds live on 15% of the national territory in the south of the country, most of them in the Cotonou and Porto Novo conurbations. While in Cotonou there are around 8500 residents per km², the density in the north drops to 20 residents per km². As in most countries in sub-Saharan Africa, Benin’s population is growing rapidly. A woman gives birth to 4-5 children on average. 45% of the population are younger than 15 years and only 3% are older than 64 years. The population can be expected to double within 25-30 years. This can make population growth a major political challenge. Internal migration alone is causing the rapid degradation of natural resources in central Benin, where the population growth rate is up to 7%. Little is reported about these problematic developments in the media.

Around 46.8% of the Beninese lived in the country’s cities in 2017. According to aristmarketing, the official capital is Porto-Novo (270,000 residents) in the southeast of Benin, near the border with Nigeria. In the country’s second largest city, however, there is not much of this to be noticed, as almost all government institutions and capital city infrastructures are located in the metropolis of Cotonou are located. The figures for the residents of Cotonou vary greatly, depending on the source. Realistically, there are 800,000 to around one million residents. If you add the agglomeration of the suburbs like Godomé and Abomey-Calavi, which administratively already belong to the Atlantique department and its statistics, but merge more or less seamlessly into the urban area, the greater Cotonou area should be around 1.2 to 1.5 Have millions of residents. The fourth largest city Parakou(206,000 pop.) Was built up and expanded into a ‘capital’ of the north with a university and airport and is an important urban center of the sparsely populated north of Benin. As “Communes urbaines”, the three cities have had a special administrative status since the 2002 administrative reform. The third largest city is Djougou (237,000 residents) in the northwest, an important trading city at the intersection of several caravan and trade routes and was under German colonial administration for a few years.

The departmental capitals of the twelve departments are important sub-centers. Although the number of departments was increased to 12 in 2002, the Beninese politicians could not agree on the new administrative capitals for a long time. This only succeeded under the government of Patrice Talon. Other larger cities are Bohicon (150,000 residents), Kandi (128,000 inh.), Lokossa (106,000 residents), Ouidah and Natitingou with 91,000 residents each and Abomey with 82,000 residents.

The government plans to introduce the ‘Lights for All’ program, with solar street lighting being introduced in both rural and urban areas as a first step, which will benefit around two million people.

Most of the Beninese live in rural areas and in villages that differ from region to region in terms of construction, size and settlement structure. The fortified mud buildings from the Atakora Mountains, the “Tata Somba” and the stake villages in southern Benin on the lower reaches of the Ouémé and on the Lac Nokoué, where the village of Ganvié has become a tourist attraction, are particularly well known. 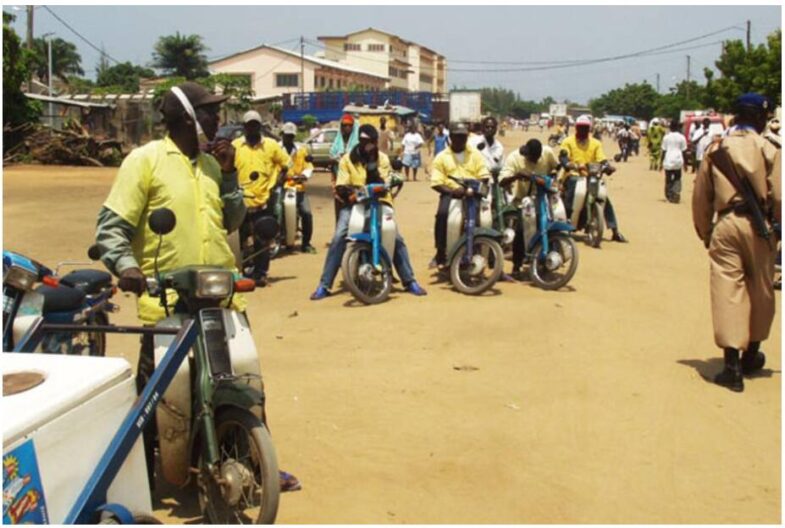 The north-south axes of the road network are relatively well developed routes. Many coaches connect Cotonou and the other larger cities (Abomey, Bohicon, Dassa, Savè, Parakou, Djoudou, Kandi, Bassila, Natitingou, Taguiéta etc.) on the north-south axis as well as with the neighboring countries. Due to the port of Cotonou, large quantities of goods are transported to Burkina Faso, Mali or Niger via these main routes, maintenance of these routes is therefore carried out regularly, but is associated with high maintenance costs. Nevertheless, potholes caused by the high volume of traffic continue to hinder traffic. In January 2016, the President presented an ambitious road construction project which is to be implemented mainly in northern Benin. The poor condition of the trucks causes many accidents and along the way you can see truck wrecks rotting away on the roadside. In the best case, the falling cargo in these accidents is cotton; in the worst case, the escape of tons of diesel pollutes the flora and fauna.

Apart from the main connections, most traffic routes are not tarred. In the rainy season these slopes are so flooded that it is hardly possible to get through without an off-road vehicle. In the cities there are also only asphalt roads on the main routes. Here, too, the traffic comes to a standstill on some sections during the rainy season. The lack of sewerage along the road and the large amounts of falling rain result in large floods on the slopes, but also on the tarred roads.

The last train route in Benin was closed in December 2007. Merchants of all kinds of goods that do not fit in a taxi or bus drove on this route. The French company group Balloré was commissioned with the participation of the governments of Niger and Benin to build the railway connection from Niamey to Parakou and to repair the existing line from Parakou to Cotonou. However, this connection is only part of the great arch that is supposed to lead from Abidjan to Ouagadougou, and from there to Niamey. A rail link from Cotonou to Lomé is also planned. In April 2014, Niamey was opened in the Nigerien capital, in the presence of the Beninese President, the laying of the foundation stone of the station building was celebrated. In 2017, however, the construction contract with Bolloré was terminated. Benin and Niger have now jointly commissioned the Chinese construction company China Railway Construction Corporation – CRCC to build the Niamey – Dosso – Parakou – Cotonou railway line (cost: approx. US $ 4 billion).

On the waterway, people and goods are transported on small wooden boats. Most of the lagoon waters and rivers are not deep enough for large ships (mainly due to silting up from soil erosion). The large, widely ramified river and lagoon network with its numerous tributaries also leads over the green border to Nigeria, which is also used by gasoline smugglers, for example, to bring the fuel in plastic canisters undetected to Benin, where it is then in large glass carafes on the roadside from the French colonial era is sold.

The international airport in Cotonou-Cadjehoun connects Benin with Europe and with various African countries. In August 2017, Benin and Rwanda signed an agreement to form a joint airline. A second airport in Parakou-Tourou was opened to traffic in March 2016 after some delays. The other small airports in the country are only of interest for regional air traffic.