Benin’s elongated shape is the result of the arbitrary colonial drawing of borders. Natural beauties, world cultural heritage sites, unique architecture and the peaceful coexistence of different peoples and cultures arouse curiosity about this diverse country on the West African Atlantic coast.

It was a long way from the Kingdom of Danhomè to today’s West African democracy: from 1894 to 1960 a French colony, then one putsch followed another, from 1974 to 1990 the era of Marxism-Leninism. Simultaneously with the collapse of socialism in Eastern Europe, people in Benin protested against the run-down system and demanded more democracy.

Despite political stability and democracy – without a wealth of raw materials, Benin’s economy remains shaped by agriculture, the informal sector and transit trade in the shadow of its neighbor and giant Nigeria.

According to eningbo, the country name of the Republic of Benin was chosen based on the historical kingdom of Benin in the area of today’s Nigeria, although there is neither a geographical nor a historical reference. But it stands for glamor and fame associated with this ancient African empire. The choice of a name is above all a decision against a name for regional kingdoms, whose tradition is only rooted by certain ethnic groups in certain parts of the country. Since the name of the country was changed in 1975 from “Dahomey” (referred to the southern Benin kingdom of Danhomè, which only comprised about an eighth of the current land area) to “Benin”, all citizens can identify with their country in the same way.

From November 1959 to November 30, 1975, today’s flag was already the national flag of Dahomey. After the country was renamed Benin on November 30, 1975, the country was given a green flag with a red star, which corresponded to the color reversal of the red flag of the People’s Revolutionary Party of Benin. The green on this flag stood for agriculture, the red for revolution and socialism, and the red star itself for national unity.

The National Conference of 1990 reintroduced the old Dahomey flag on August 1st, 1990. The flag of Benin is designed in the pan-African colors: one vertical green, two horizontal stripes in yellow and red. The color green symbolizes hope, red stands for the courage of the ancestors and yellow for maintaining the strength of the country.

The coat of arms of Benin is quartered. The first field shows a typical residential castle in the northern Atakora Mountains (“tata somba”). In the second silver field the highest order in the country, in the third a palm tree, and in the fourth a three-masted sailing ship. Corn on the cob peek out from two black cornices above the shield. Shield holders are two panthers. The coat of arms represents the people, a glorious past, agricultural production and overseas trade tradition. At the same time, the north and the south are symbolized as the two great natural units.

On a banner below the coat of arms is the motto: “Fraternity, Justice, Work”.

The current coat of arms was introduced for Dahomey after independence. Between 1975 and 1990 the coat of arms showed a green disc, surrounded by a wreath of corn on the cob tied with a red ribbon. In the upper part of the green disc there was a red five-pointed star and in the lower part, directly on the edge of the disc, the blade of a circular saw. Like the flag, the old coat of arms was reintroduced by the National Conference in 1990.

The state seal of the Republic of Benin, formed from a circular disc with a diameter of 120 millimeters, which is surrounded by a second larger circle, shows a boat rowing on waves with six five-pointed stars, accompanied by a bow with an arrow made of palm wood, that of two Scepter (from the Kingdom of Danhomè) is stretched, in the lower part a banderole with the motto “Fraternity – Justice – Work” and in the upper part of the frame the circumferential inscription “Republic of Benin”.

The national anthem ‘L’ Aube Nouvelle ‘ -‘ The dawn of a new day ‘was written and composed by the priest Gilbert Dagnon and adopted at the independence of Dahomeys on August 1st, 1960 and, in contrast to the country name and the other state symbols, has been retained until today.

Commerce and the port of Cotonou

Cotton, cashews, shea nuts and pineapples are particularly exported. It imports food such as rice, meat or fish, chemical and pharmaceutical products, machinery and capital goods, as well as energy that is produced by the Volta Dam Akosombo in Ghana and delivered to Benin via Togo. Benin economically strong from its big neighbor, Nigeria depends. Nigera closed its border with Benin on September 20, 2019, and the effects are enormous.

The Dantokpa market in Cotonou is one of the largest markets in West Africa and an important hub for the movement of goods. Apart from the food, the ‘pagnes’ belong, the brightly printed fabrics, are among the most important commercial goods on the market.

Through the port in Cotonou, Benin is a transit country for goods to Niger, Nigeria, Burkina Faso and Chad. Around 75% of the state budget is financed from tax revenues, of which around 45% comes from customs revenues, of which around 80% comes from the port of Cotonou alone. As a flourishing market for used cars, Cotonou is considered a transshipment point for the entire region, but has been permanently damaged by excessive customs and transportation regulations. A new, modern deep-sea port is to be built in Sèmè-Podji, 20 km east of Cotonou.

Many observers, such as the renowned sociologist and parliamentarian Dr. Bako Arifari, spoke of a complex system of institutionalized corruption of the customs authorities at the port. Accordingly, the annual embezzlement by customs at the port had a volume of 75 to 90 million euros, the normal daily embezzlement of a simple customs officer was around 1200 euros. The government bonuses Yayis (2006-2016), despite efforts in the fight against corruption have barely noticeable changes in the conditions at the port. In January 2018, the government of Patrice Talon, the company Port of Antwerp International (PAI) commissioned the port of Cotounou for 10 years to manage. After the port administration laid off some employees, there are now open conflicts between the administration and the union.

In addition to official trade via the port, re-exports and informal trade as well as smuggling, especially with neighboring Nigeria, on whose economic development Benin depends, are among the most important pillars of the economy. “More than a third of tax revenues depend on Nigeria. In terms of dependency and vulnerability to Nigeria, we consider this to be too much. The appropriate level should be below 25%,” said Benin Finance Minister Romuald Wadagni (July 27, 2016).

Recently, however, Nigeria has no longer been willing to tolerate the mostly illegal imports from Benin and has imposed an import ban on many products. Closures of the border by the Nigerian authorities for just a few days have an immediate negative impact on Benin’s economy.

For the German economy, Benin plays a marginal role as a trading partner; in 2017, Benin ranked 155th out of a total of 239 German trading partners in terms of trade volume. 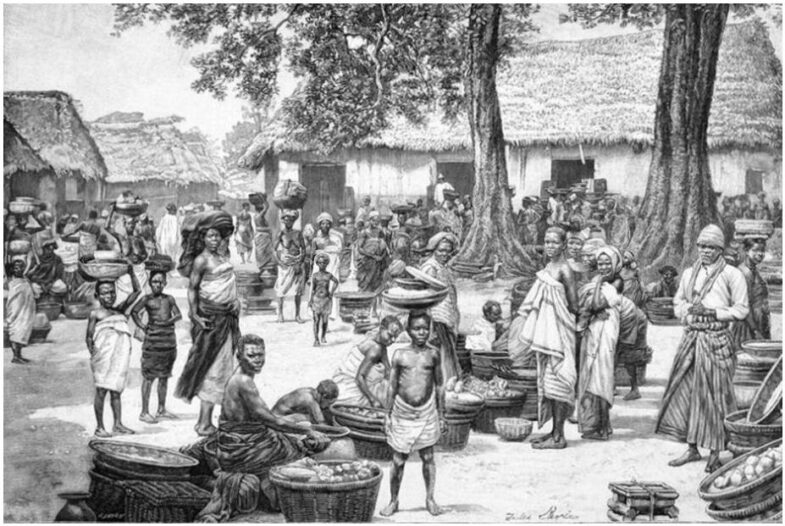