High unemployment has long been a scourge in Belgium. A trigger was the crisis in the coal and steel industry in Wallonia during the 1980s. There is also a large hidden unemployment through various early retirement programs and other measures. However, the regional differences are large.

The proportion of residents without work is more than twice as high in Wallonia (9.8 percent in 2017) as in Flanders (4.4 percent), and even higher in Brussels (15 percent).

Of those who work, four out of five are employed in the comprehensive service sector.

The retirement age is officially 65 years, but in practice it is on average about 59 years. There are plans to raise the retirement age to 67, but there is strong opposition from the trade union movement.

There are problems with a lack of professional skills in many areas. The population as a whole is relatively low-skilled, compared to other industrialized countries.

The labor market is largely regulated. The working week is normally 38 hours. Just over half of the employees are members of the union. Trade unions and employers’ organizations have a strong position and often participate in the public debate on even more general issues. In the same way as within the party system, there are Christian democratic, socialist and liberal unions, who have close contacts with the parties, even though they are formally independent today. 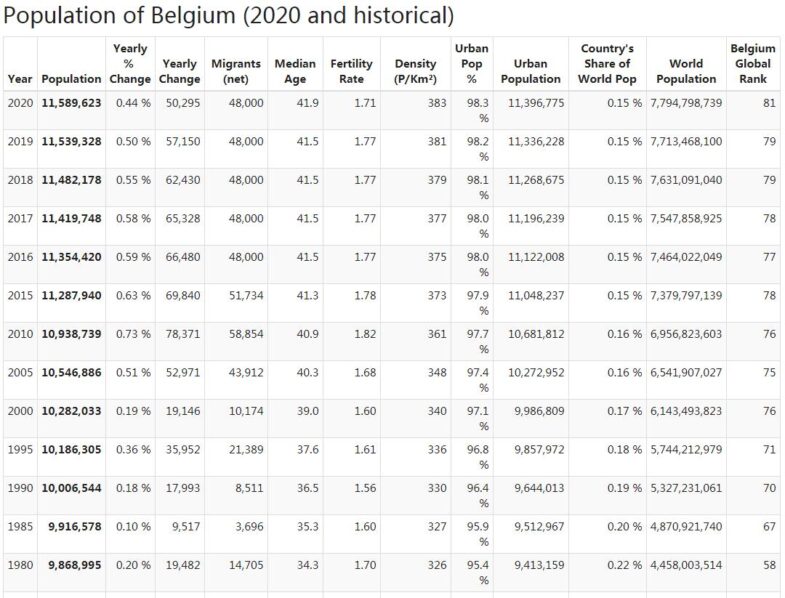 The official New Year celebration in the capital is canceled due to concerns about an imminent terrorist act.

A few days before the end of the year, police say two people have been arrested, in Flemish Brabant and in Liège, on suspicion of planning an attack on New Year’s Eve. Reportedly, military clothing and computer equipment have been seized in connection with raids, but no weapons or explosives. The arrests are said to have no connection with the terrorist act in Paris. The search for suspects for the Paris Council continues and by the end of the year a total of ten people have been arrested, accused not least of having helped the eager Salah Abdeslam return to Brussels (see November 18, 2015).

The government and energy company Electrabel agree to extend the use of two nuclear reactors for a decade, to 2025. One reactor has been closed since 2013 and the other has been closed for maintenance, but both will then be up and running again. The purpose is to facilitate the transition to clean energy sources and reduce the risk of electricity shortages.

Alarms in Brussels are raised to the highest level and people are urged to stay inside. The authorities fear an attack to the same extent as it did in Paris eight days earlier (see France: Calendar). A series of raids are carried out and at least 16 people are arrested. Schools, universities and the metro are closed. Five arrested are charged with terrorism in connection with the Paris death. After four days, schools reopen and another couple of days later the terror threat level is reduced to three on the four-degree scale.

Five days after a terror attack in Paris, which claimed the lives of 130 people (see France: Calendar), 28-year-old Belgian citizen Abdelhamid Abaaoud and two other people were killed in a raid north of the French capital. Following the Paris Council, raids have been carried out in Belgium and especially in Molenbeek, which is a poor neighborhood in Brussels known as a stronghold for extremist Islamists. Abdelhamid Abaaoud, who has been identified as the main responsible for the Paris attack, has been on the lookout for Belgium since an averted attack in Verviers (see January 2015). He was sentenced to 20 years in prison in his absence in July for recruiting jihadists. Abaaoud, who is of Moroccan origin and has fought for IS in Syria, grew up in Molenbeek. The search continues in Brussels after 26-year-old Salah Abdeslam who is believed to have been directly involved in the attack and subsequently moved back to Brussels.

At least 80,000 people are taking part in a demonstration in Brussels against the government’s policy in its first year in power. Three of the larger trade unions are behind the protest, which is aimed at cuts in social benefits, tax reform aimed at facilitating employers and raising retirement age (see also November 2014).

Up to 20,000 demonstrators in Brussels support refugees and demand that they be well received. The government has been criticized for not doing enough to meet the large influx of new refugees across Europe.

Nearly 6,000 history fans participate and 60,000 spectators watch as the 200th anniversary of the Battle of Waterloo is celebrated (see Older History).

Criticism against statement about genocide

Hard condemnation comes from Turkey since Prime Minister Charles Michel called the massacres of Armenians during the First World War a genocide. Turkish Foreign Ministry warns of “consequences”. Michel expressed his views in Parliament as a result of the European Parliament’s formal recognition of genocide as such.

The police strike around 20 locations against two groups of suspected Islamists, mainly of Chechen origin. Sixteen people are admitted to the hearing but only two are formally arrested.

The centenary commemoration is celebrated by what is considered the first large-scale chemical warfare attack, which occurred near Ypres in 1915. The Germans then used chlorine gas which claimed the lives of 1,500 soldiers, injuring many more. During the rest of the First World War, all parties then used chemical weapons.

A total of 45 people fall into one of the most extensive terrorist targets to date in Europe. The protagonist is Fouad Belkacem who was one of the leaders of the now disbanded Sharia4Belgium group and accused of brainwashing dozens of young men and getting them to join the war in Syria. Belkacem, who has been convicted several times in Belgium, is now serving 12 years in prison. The other 44 receive between three and 15 years in prison, some of them conditional. Only seven of the defendants are present, the rest being convicted in their absence.

Police kill two men in Verviers near the border with Germany after they opened fire with “military weapons” against police. A suspect is injured and arrested in connection with the assault. According to the police, the men, who returned from fighting in Syria, were about to conduct an attack on a police station. Several other anti-terrorist riots are being carried out in other parts of the country at the same time and at least two more people are arrested. The events occur one week after the terrorist attack against Charlie Hebdo’s editorial staff in Paris (see France: Calendar).