The state is the dominant employer in Belarus (Belarus), where the private sector is still disadvantaged. According to the United Nations Development Fund UNDP, more than half of Belarusians are employed by companies wholly or partly owned by the state.

About one-third of all Belarus employees are in the manufacturing industry, which is the largest hardware sector as a specialty. Second largest is service and trade, followed by agriculture. As many as a quarter of the population is considered to work in the informal, black sector of the economy.

Many have one-year contracts that are reviewed every year. The lack of job security gives the employer – and the authorities – great power to get rid of uncomfortable people. Wages are centrally determined by the government.

The official unemployment rate is very low and often falls below one percent. In reality, however, it is considered to be higher, although it is still lower than in other European countries. UNDP, which bases its country description on both the country’s official statistics and calculations made by the International Monetary Fund (IMF), estimates 4.7 percent unemployment.

Low unemployment, as part of the pursuit of high welfare standards, is one of President Lukashenko’s main political goals. In reality, a large number of Belarusians are underemployed and many lack full-time work without being registered as unemployed. 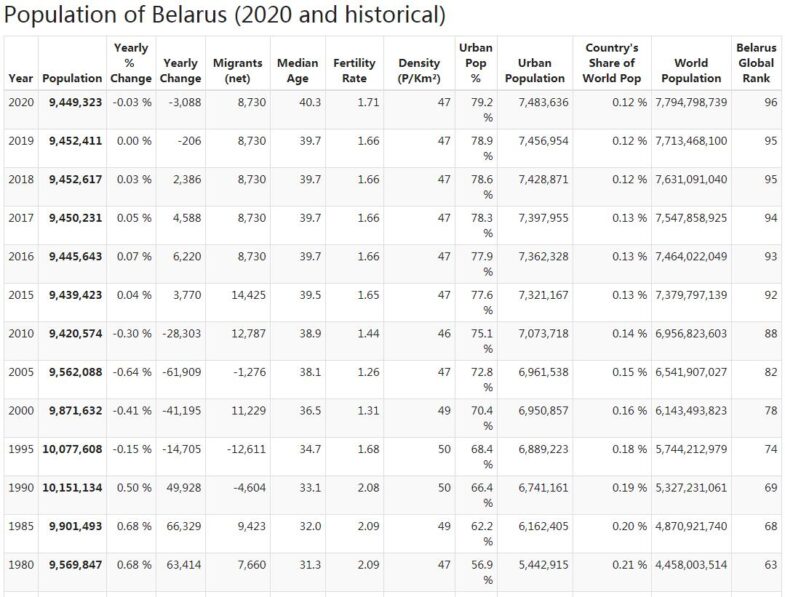 To punish “community parasites” (people who work less than 183 days a year), in February 2015, Lukashenko introduced a special tax for the unemployed. A month later, the president interrupted the collection of this “sponge tax” on the grounds that local authorities had been overly zealous and that innocents had been hit.

Many Belarusians go abroad, mainly to Russia and in recent years to Poland, to work. In particular, construction workers go to Poland for 40 years, replacing Polish and Ukrainian workers who applied for higher wages in Western Europe. In the first quarter of 2019, 93,000 Belarusians worked abroad, according to a sample survey conducted by the Belstat statistical authority, but that listing only covers people who worked abroad for less than a year. According to various calculations, the total number of people working abroad amounts to several hundred thousand every year.

Formally, employees have the right to organize themselves in trade unions, but the authorities have increasingly come to control them. Independent unions are subjected to harassment, which has led to criticism from, among other things, the UN Labor Organization ILO.

The government is asking for loans from the IMF

Belarus decides to apply for a loan from the IMF of USD 3 billion. The government promises to implement some economic reforms to live up to the conditions. As late as November, President Lukashenko ruled out reforms, as a change in the country’s economic system, he said, would be equivalent to crushing the political system.

The opposition is allowed to demonstrate

Hundreds of opposites are allowed to conduct a public demonstration in Minsk. It is done to honor the victims of the Stalin interrorn. Civilian police who monitor the manifestation do not intervene.

Plans on Russian airbase are rejected

Foreign Minister Uladzimir Makej says on a visit to Moscow that Belarus sees no need to discuss the construction of a Russian air base (see September) in his country. He says such a base would not reduce either the military or political tensions in the region.

The OSCE criticizes the election

The OSCE points to “significant problems” in connection with the election and especially in the counting of votes. Belarus has a long way to go to fulfill its democratic commitments, it says. Despite this, France’s EU Minister Harlem Désir says that the EU has decided to lift the sanctions against Belarus since the election ended without incidents. A formal decision is not expected until the end of the month.

The presidential election runs without surprises. Lukashenko is re-elected for a fifth term, with 84.1 percent of the vote according to official results. The second most votes, 6.4 percent, are given the option “against everyone”. Tatsiana Karatkevich gets 4.4 percent and Siarhej Hajdukevich 3.3 percent. The turnout is close to 87 percent.

Aleksijevich gets the Nobel Prize

Three days before the presidential election, it is announced that the author Svetlana Aleksijevich is awarded the Nobel Prize of the Year (see also Culture). She is known as a regime critic and has lived abroad for periods of time. Now, however, she lives in her home country, although she is basically invisible in the state-controlled media. After the announcement, a congratulation nevertheless comes from the highest point.

Russia wants to build an air base

Belarus is told by Moscow that Russia wants to build a military air base in the country. The government in Minsk has so far not commented on the task.

The electoral authority approves three challengers to Lukashenko in the October presidential election. Among them are the country’s first female presidential candidate, Tatsiana Karatkevich, who is active in the opposition movement Havary Praudy (Say the truth). Among other opposition parties, there is concern that her candidacy will be used by the regime to try to give a picture of the election taking place under democratic forms.

President Lukashenko pardons six men who have been imprisoned for political reasons, including former presidential candidate Mikola Statkevich (see May 2011 and May 2015). The six have been regarded as the last political prisoners in Belarus. The EU describes the releases as a step in the right direction. Belarusian opposition politician Aleksey Janukevich says that the president realizes that he must forge a dialogue with the West in the face of the economic crisis and “political madness” in the country’s most important ally, Russia.

The European Commission removes 24 Belarussian citizens from its sanctions list. Among them are ministers and former ministers, people who worked in the presidential administration, a well-known TV personality, university rectors and judges. No explanation is given as to why they are removed from the list, regarding travel restrictions and frozen financial assets.

Presidential elections are announced until October 11. The date is set by Parliament. Aleksandr Lukashenko is expected to stand for re-election and is expected to win by a good margin once again. Eight so-called nomination groups are given the right to nominate a candidate after having managed to collect 100,000 signatures from eligible voters. Oppositionman Mikola Statkevich, who took part in the 2010 election, is banned from running since he has been in prison since the last election.

The Ministry of Information is blocking access within the country to the lookup website looky.org, which is mainly devoted to arts and lifestyle issues. The site is accused of having “scattered tasks that could harm the nation’s interests”, including by questioning the lavish celebration of Victory Day in World War II.

Belarus is promised to borrow around US $ 7 billion from China. The message is given in connection with Chinese President Xi Jinping’s visit to Minsk.

Law on payment for part-time work

Parliament adopts a law requiring people who work less than half the year to pay the equivalent of just over SEK 2,000 to the state. Disabled people, pensioners and young children are excluded.

Belarus is harshly criticized by the UN Human Rights Council in Geneva. The regime is blamed for holding political prisoners, applying the death penalty and not allowing for free and fair elections.

Former presidential candidate Mikola Statkevich, who was sentenced to six years in prison in 2011, is being transferred to a high-security prison as a punishment for “systematic violations of internal regulations” at the somewhat lenient prison where he served. Statkevich was one of several opposition candidates imprisoned after the December 2010 presidential election, but the only one who is still in custody. He has consistently refused to ask President Lukashenko for mercy.

Integration with Russia is rejected

President Lukashenko said in an interview with a US news agency that Belarus will never become part of Russia, “despite the fact that many politicians in Russia still harbor imperialist views and consider Belarus as just one province in northwestern Russia”.

President Lukashenko said at its annual press conference that Russia has a special responsibility to stop the conflict in eastern Ukraine. He expresses concern that Belarus will be drawn into the conflict and assures that Belarus “will never fight against the West to please Russia”. Lukashenko also says that it is fully possible for Belarus to leave the EEU if agreements are not followed. He takes the conflict with Russia on the food trade (see December 2014) as an example of a “trade war” within the block that cannot be accepted. Lukashenko emphasizes that both Belarus and Kazakhstan want to see the EEU only engage in economic cooperation. He indirectly suggests that Russian President Putin wants to use the EEU for political purposes.

Participants in manifestation are sentenced to prison

Five people who participated in a demonstration in memory of killed democracy activists in Ukraine are sentenced to prison for between 5 and 15 days. During the manifestation, they held up a portrait of a Belarusian citizen who was killed during protests in Kiev in January 2014. The Belarusian regime often condemns short prison sentences to deter citizens from participating in public protests.

Lukashenko wants to approach the west

President Lukashenko says he wants to work purposefully to improve Belarus’s relations with the West. He urges Russia not to try to stop him.

The Eurasian Economic Union (EEU) becomes effective on New Year’s Day. In the beginning, the organization consists of Belarus, Kazakhstan and Russia. Armenia will formally enter into force on 2 January, while Kyrgyzstan will become a full member in May, provided that all its parliaments before finally approve the agreement. In addition to free trade between Member States, the Union includes coordinated financial systems and close cooperation for industrial and agricultural production as well as for the labor market and transport systems. From the beginning, however, wear and tear is noticed between the countries, where Belarus in particular criticizes Russia’s trade policy. Kazakhstan’s President Nazarbayev has expressed concern that Russian policy towards Ukraine could damage EEU relations.