Unemployment and underemployment are widespread problems in Bangladesh. The vast majority of people, both in urban and rural areas, are active in the informal sector of the economy. Therefore, they are not visible in the unemployment statistics.

Nearly half of Bangladeshis are employed in agriculture. The country’s women have begun to work more and more as the textile industry has expanded. Many young women move from the countryside to the cities to look for jobs. Out of about four million Bangladeshi women in clothing production, at least 90 percent are estimated to be women.

Working conditions in the more than 5,000 clothing factories are often poor and wages are very low. The conditions were noted around the world in connection with a severe accident in 2013, when over 1,100 people were killed and thousands injured when the Rana Plaza factory building in Dhaka collapsed (see Calendar). Following pressure, the government entered into agreements with foreign buyers and development partners to improve the security standard. At the end of the same year, the minimum wage was increased by 75 percent. Five years later, only partially the improvements in safety and working conditions agreed upon after the accident were implemented, and despite a series of strikes among textile workers, Bangladesh remained one of Asia’s most competitive countries in terms of wages.

In the past, many children also worked in the clothing industry, but after international protests in the 1990s, child labor in clothing almost ceased. At the same time, efforts were made to get children to go to school (see Education), which has also contributed to fewer child workers. Nevertheless, several million children under the age of 14 are still estimated to work, mainly in agriculture or as maids. The widespread poverty means that families often cannot support themselves unless the children contribute.

Many dangerous workers are reported to be under the age of 15 within the dangerous ship scrap (see Industry). There are also children in the country’s large sex industry. There is also organized smuggling of women and children to other countries in Asia and the Middle East, where they are exploited in prostitution or as low-paid labor.

The trade union movement is fragmented and most of the around 25 central organizations are linked to some political party. Most government employees, military and teachers are not allowed to organize. 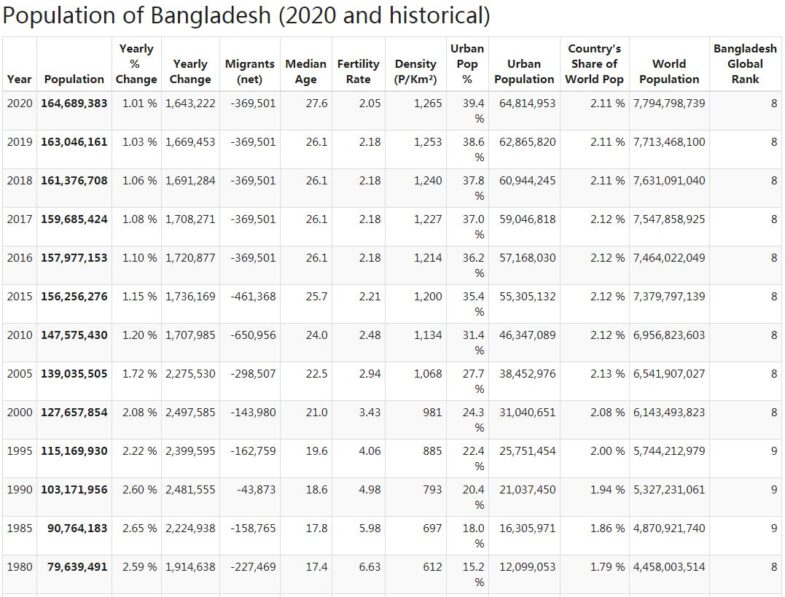 In total, only three percent of the labor force is unionized. The highest is the degree of organization within the state textile industry.

All union activity was long banned in the tax-free zones, where foreign companies have favorable conditions (see Economic overview). But after pressure, both through union protests in the country and through consumer protests in the United States, it is now allowed with some union activity.

Strikes are common. Sometimes they deal with union issues such as wages or work environment, but most often they have a party political purpose.

Former Deputy Prime Minister Syed Mohammad Qaisar is sentenced to death for war crimes during the Liberation War. He is found guilty of, among other things, genocide, rape, blackmail, arson and torture. Jamaat-e-Islami’s Deputy Secretary-General Azharul Islam is sentenced to death for rape, mass murder and genocide during the war. Among other things, he is held responsible for the deaths of hundreds of Hindus.

Jamaat-e-Islami chairman Motiur Rahman Nizami and one of the party’s central committee members, Mir Quasem Ali, are sentenced to death for war crimes committed in 1971 (see July 2010, May 2012 and January 2014).

Islamist leaders get their verdict converted

Border dispute with India gets its solution

The Permanent Arbitration Court in The Hague grants Bangladesh the right to just over 19,000 square kilometers of sea area out of the more than 25,000 square kilometers that have been the subject of a decades-long dispute between Bangladesh and India. Both countries declare themselves satisfied with the outcome. Bangladesh hopes that the impact will facilitate the exploitation of gas and other natural resources at sea and lead to a boost for the country’s fishing fleet.

Jamaat’s president is sentenced to death

Jamaat-e-Islami president Motiur Rahman Nizami is sentenced to death along with 13 other people for smuggling weapons into separatists in the Indian state of Assam in 2004, when he was minister of industry. Nizami is also prosecuted by ICT (see July 2010).

Given results on violent election day

The parliamentary elections are conducted despite the opposition boycott, strikes and widespread unrest. Quantities of polling stations are set on fire and opposition and police forces are gathering. More than 20 people are killed during Election Day. The opposition boycott makes the currency exit given; The Awami League wins big.