More than three-quarters of Bahrain’s workforce is made up of foreign migrant workers, mainly from India and Pakistan, as well as from other Arab countries. During periods when unemployment was high, there has been a demand for more jobs to go to the country’s own citizens.

In particular, demands have been placed on jobs for the Shi’ite Muslim majority, who were particularly hard hit by a job shortage. A large part of the immigrant labor force is Sunni Muslims, which has also contributed to the growing contradictions between Sunni and Shia Muslims since 2011 (see Current policy).

Official unemployment is low, but high population growth creates pressure on the labor market. To combat unemployment, the government has taken a number of measures: employment agencies have been set up, job training has been introduced and financial contributions to unemployed have been increased. The government has also made it more expensive to employ foreign workers and introduced contributions to the employment of Bahraini citizens. The influx of new foreign workers has decreased.

Many new jobs have been created in the service sector. Many Bahrainians are also looking for neighboring countries like Qatar in search of work.

By a constitutional change in 2002 (see Political system) it was allowed to form trade unions and strike. However, unions in the public sector were not allowed. The Arab Spring 2011 set the conditions at its forefront. One of the country’s largest unions initially participated in the protests by announcing a strike. A commission later found that several thousand workers had been fired or subjected to repression after striking or participating in demonstrations. Promises came from the country’s government, but the following year the law was amended to limit the activities of trade unions. The International Trade Union Confederation (IFS, or Ituc in English abbreviation) has since emphasized that unions in Bahrain are very vulnerable. 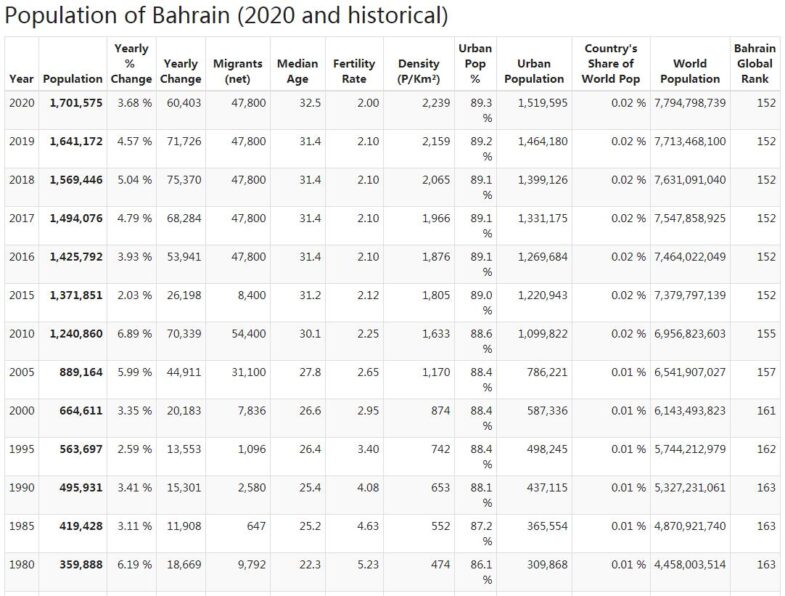 Bahrain is accused of child abuse

Shia Muslims are sentenced to prison

A policeman is killed and four injured when a bomb explodes in a village on the island of al-Muharraq. The bomb must have exploded when police confronted a terrorist group.

Since the arrest of al-Wifaq’s Deputy Secretary-General Khalil Marzook, accused of urging young people to resort to violence and overthrow the government, al-Wifaq and four other groups leave the national reconciliation talks (see February 2013). Thousands of people are demonstrating in Manama against the arrest.

Demonstrations are banned in the capital

King Hamad forbids demonstrations in the capital Manama. The penalty is also tightened for parents of young people participating in protests. The police are preventing the demonstration in Manama that the opposition has planned in the middle of the month through extensive barriers, tear gas and rubber bullets. Clashes between police and activists also take place in other cities and villages in the country. A week later, Shia Muslims are conducting a minor manifestation in Manama and demanding political reform. A few days later, four police officers are injured by a car bomb when patrolling in a Shiite village.

One policeman is killed and two injured in an attack on a police station in a Shiite village. A week later, four police officers are injured when a remote-firing bomb is fired outside another Shiite village.

King Hamad agrees to tighten the scale of the anti-terror laws. An explosive attack or attempted such “for terrorist purposes” shall be punishable by at least ten years in prison. If an explosive attack results in someone being killed, the sentence is death or life imprisonment. Persons who carry out or call for “terrorist acts” should also be deprived of their Bahraini citizenship.

About 10,000 Shi’a Muslims take part in a sitting strike organized by al-Wifaq to mark their dissatisfaction with the country’s highest Shi’ite leader, Isa Qasim, having his home searched by the authorities.

Thousands in protest of Formula One competitions

Thousands of residents are demonstrating ahead of the Formula 1 Grand Prix competitions taking place in Baharin at the end of the month. The protesters see the contests as a way for the government to give Bahrain some international glory and to cover up the abuses in the country.

Violent on the anniversary

About 30 people are injured in clashes between protesters and police on the two-year anniversary of the Saudi military march in Bahrain.

Police are sentenced for deadly violence

Crown Prince Salman Al Khalifa is named First Deputy Prime Minister. He is regarded as a relatively moderate force and the appointment is interpreted as an attempt by the regime to strike a more conciliatory tone towards the opposition.

A young man and a police officer are killed in connection with unrest on the anniversary of the protests at Pärltorget 2011.

The opposition and the government are launching national dialogue to try to put an end to the unrest in the country.

Princess is accused of torture

One of the country’s princesses, Nora bint Ibrahim Al Khalifa, who is working on the country’s anti-drug authority, is accused of torturing three people during the 2011 wave of protests.