Azerbaijan’s rapid economic development, thanks to the production of oil and gas, has generated new jobs for the economy as a whole, but less than one percent of the country’s labor force is directly involved in oil and gas extraction.

More than half work in the service and service profession, about a third in agriculture, and about twelve percent in the construction and manufacturing industries.

The trend has driven up wages sharply, but measured by Western European standards, they are still very low. An average monthly salary in 2015 corresponded to approximately SEK 4,000, four times as much as five years earlier. However, the pay gap is large. The minimum wage was increased in early 2019 from the equivalent of about SEK 750 to just over SEK 1,000 a month. Employees in the oil industry and the financial sector are best paid, while wages in the manufacturing industry and agriculture are lagging behind.

The oil and gas

Azerbaijan lacks a functioning labor market policy and measures against unemployment. Jobs are often mediated through informal networks, not infrequently linked to corruption. The officially registered unemployment rate has been around 5 percent in recent years, but the number of blacks is believed to be large. Other sources state that about one in four residents of Azerbaijan in working age lack jobs. 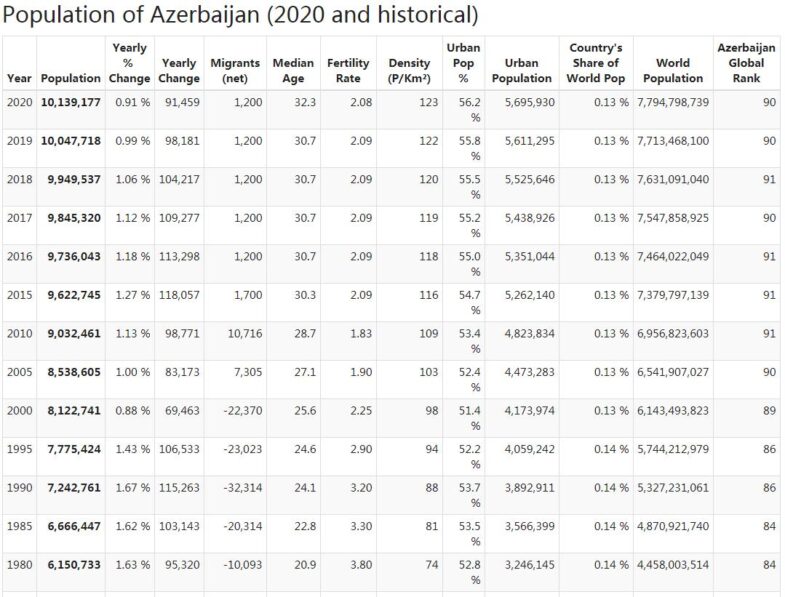 Many are trying to support themselves in various forms of black jobs and black trade in the informal sector, which is considered to constitute at least one-third (some figures claim 60 percent) of GDP.

For many years, hundreds of thousands of Azerbaijanis have worked abroad, mainly in Russia and Armenia. In recent years, however, the Azerbaijani oil economy has in turn attracted a growing number of migrant workers from neighboring countries.

The AHIK trade union organization AHIK claims to have 1.6 million members. The country’s constitution guarantees the right to strike, but not in sectors that are central to society. Unions may also not engage in political activities, be affiliated with political parties or receive support from parties.

A 21-year-old member of a youth democracy movement is sentenced to ten years in prison for scribbling regime-critical slogans on a monument to former President Heydar Aliyev. Formally, he is convicted of drug possession.

Parliament adopts a law that makes it criminal to offend the president on the internet; The penalty can be fined up to around SEK 8,000 or imprisonment for up to three years. For a long time, the traditional media has been strictly controlled by the state, so the only way to express dissenting opinions is through social media. Offensive statements on the internet have been banned for three years, but in the past no insult to the president has been mentioned explicitly.

Human Rights Watch reports in a report that the hopes of a freer climate in Azerbaijan have come to shame. After interviews with more than 90 people, the organization reports on continued arrests of political activists, journalists and others on false and politicized criminal charges.

Bank Governor Jahangir Hajijev, who was arrested at the end of 2015, is sentenced to 15 years in prison for, among other things, embezzlement of large sums during the time he was chairman of the board of state of the International Bank of Azerbaijan. At the same time, the Baku court sentenced several other defendants to multi-year imprisonment.

Not surprisingly, the Azerbaijani people are giving their strong support for the constitutional changes that give the president enhanced power. According to the Election Commission, 91.2 percent of voters agree to extend the term, introduce a new post as Vice President with great influence, give the President the right to announce new elections and dissolve Parliament. The minimum age for a presidential candidate is lowered to 35 years, which the opposition fear will pave the way for one of the president’s three children to eventually succeed him. President Aliyev has two daughters aged 32 and 27 and a 19-year-old son. 69.7 percent of those entitled to vote participated in the referendum.

The UN Special Rapporteur on human rights issues, Michel Forst, says in a report that Azerbaijani civil society is “paralyzed” by the government’s persecution of critical journalists and human rights activists. Conditions have not been so serious since the country became independent in 1991, he says after a nine-day visit. According to Forst, the authorities’ description of human rights activists as “fifth columnists” for Western governments has meant that the inhabitants of the community do not understand the important role of civil society. The government rejects the criticism as “prejudicial”.

The Venice Commission, the Council of Europe’s experts on constitutional issues, criticizes the impending referendum on constitutional changes. According to the Commission, the proposals risk seriously disrupting the balance of power and giving the president unduly high power. The constitutional experts point out, among other things, that the president’s already strong power would be further strengthened if his mandate is extended from five to seven years. The President’s proposed power to dissolve Parliament would, in principle, silence any political opposition and affect the independence of the judiciary as Parliament’s right to approve judges would be eroded. The Venice Commission is also critical of the fact that the referendum was not preceded by debate in Parliament or among the public and was carried through too quickly.

A university in Baku has dismissed 50 Turkish teachers who are suspected of being linked to the religious Gülen movement. It is accused in Turkey of lying behind the attempted military coup there on July 15. The dismissed teachers are given two weeks to leave the country.

A Baku High Court decides that the conditional prison sentence for journalist Xədicə İsmayılova (see May 2016) should be shortened from 3.5 years to 2 years and 3 months. No justification is given as to why the penalty is mitigated.

The government orders that the independent TV station ANS be closed. The reason is that it planned to send an interview with the exiled Turkish religious leader Fethullah Gülen, who is accused by the Turkish government of lagging behind a coup attempt earlier in July. Azerbaijan has close ties to Turkey’s “bread ration” and is financially dependent on continued good contacts with the Ankara government.

The Constitutional Court approves a number of proposed constitutional changes, the most important of which is that the president’s term of office be extended from five to seven years. A new post as first vice president will also be introduced according to the proposal.

Armenian and Azerbaijan Presidents agree that more observers of the ceasefire in Nagorno-Karabakh are needed. They meet in Saint Petersburg under the mediation of the Russian president. There are currently only six unarmed OSCE observers in the disputed area. How many more should be sent there, or when it should be done, nothing is said about.

Claims for damages to the regime

The European Court of Human Rights convicts Azerbaijan to pay damages to human rights activists Leyla and Arif Yunus for failing to receive the medical care they needed while in prison. The court orders the state to pay EUR 15,000 to each of them. They were allowed to leave the country in April after being conditionally released.

The Supreme Court tears up the sentence of 7.5 years in prison (see September 2015) for prominent journalist Xədicə İsmayılova. The sentence is conditional on 3.5 years imprisonment and the court orders that she be released immediately. İsmayılova has mostly been known for his examination of how President Aliyev and his family accumulated a fortune.

The presidents of Armenia and Azerbaijan promise to ensure that the ceasefire in Nagorno-Karabakh is respected. They also agree to hold new peace talks in June. Less than a day later, an Azerbaijani soldier and an Armenian from the breakaway republic are reported to have been killed in new fighting.

More clashes occur between Armenians and Azerbaijanis in Nagorno-Karabakh. At the end of the month, more than 100 people are reported to have lost their lives in the fighting.

MR activists are allowed to leave the country

Human rights activists Leyla and Arif Yunus travel to the Netherlands where they seek political asylum. After being conditionally released for health reasons from long prison sentences, they are allowed to leave the country (see also August 2015).

Sporadic fighting continues despite the ceasefire agreement and more casualties are reported. The parties are said to agree on a new temporary interruption in the fighting to allow both sides to take care of their dead with the help of the OSCE and the Red Cross. In total, at least 90 people are said to have been killed, most soldiers.

After four days of fighting, which are said to have claimed at least 64 lives, the Ministry of Defense in Azerbaijan and the leaders of Nagorno-Karabach report that they agreed on a ceasefire. Azerbaijan claims during the course of the fighting that it has taken several strategic points in the Armenian-controlled area, which in this case is the first time the front line has changed since the war ended in 1994.

The toughest fighting in at least 20 years is breaking out around the disputed Nagorno-Karabakh area. Azerbaijan and Armenia are mutually accusing each other of having attacked with heavy weapons. At least 18 Armenian and 12 Azerbaijani soldiers are killed, as are two civilians. Russia and the United States urge the parties to immediately cease fire, while Turkey’s president promises to support Azerbaijan “until the end.” Azerbaijan announces unilateral ceasefire, but fighting continues and three more Azerbaijani soldiers are reported to have been killed on the third day.

Human rights lawyer Intigam Əliyev, who was sentenced to seven and a half years in prison in April 2015, surprisingly released after being sentenced to five years conditional. His lawyer says that the case should be reported to the European Court of Human Rights to get a acquittal.

Journalist Rauf Mirkadirov (see December 2015) gets his six-year prison sentence mitigated to five years conditionally and is set free. In a wider amnesty, 148 prisoners are released, 14 of whom are sentenced for political reasons.

Zeynal Bağırzadə, activist of the opposition party People’s Front in the Nachichevan region, is sentenced to eight years in prison for being involved in a handgun with the police.

President Aliyev orders the government to plan a comprehensive privatization program to revitalize the slowed economy.

The mass arrest after price protests

55 people are arrested by police following nationwide protests against price increases and the eroded value of the domestic currency. In several cities, the police shut down the protests with tear gas.