In recent years, unemployment has been around 5 – 6 percent. Among young people, unemployment is twice as high and less than half of Aboriginal people have a permanent job. Nearly 40 percent of all women worked part-time in the mid-2010s. The work week is normally 38 hours and an employee is entitled to four weeks paid vacation per year.

The shortage of labor of European origin during the first half of the 20th century created a strong trade union movement in Australia. This achieved good working conditions and one of the highest pay levels in the world for Europeans, but at the same time excluded other people groups.

Between 1988 and 2003, the number of union members halved, from 45 to 23 percent. The reason was, among other things, legislative changes that reduced the unions’ ability to take combat measures and weakened the right to demand collective agreements. Since then, the number of union members has continued to decline, and in 2016, only about one-sixth of all employees were members of any union.

Until the oil crisis in 1973, Australia had a low unemployment rate, normally only a couple of percent. During the first half of the 1990s, the percentage of unemployed rose to 12 percent, the highest figure in modern times, and the unions were forced to hold back wage requirements to strengthen the country’s international competitiveness.

Most of the new jobs created during the past decade have been part-time jobs or temporary jobs that do not entitle to benefits such as sickness benefits and more. Although the principle of equal pay for equal work was introduced as early as the 1970s, the pay gap between men and women is large, mainly because women-dominated professions are poorly paid. Women earn an average of 17 percent less than men. In a 2010 report, the UN Committee on the Elimination of Discrimination against Women criticized the gender pay gap as well as the fact that so few women were found in the top positions of society and politics. 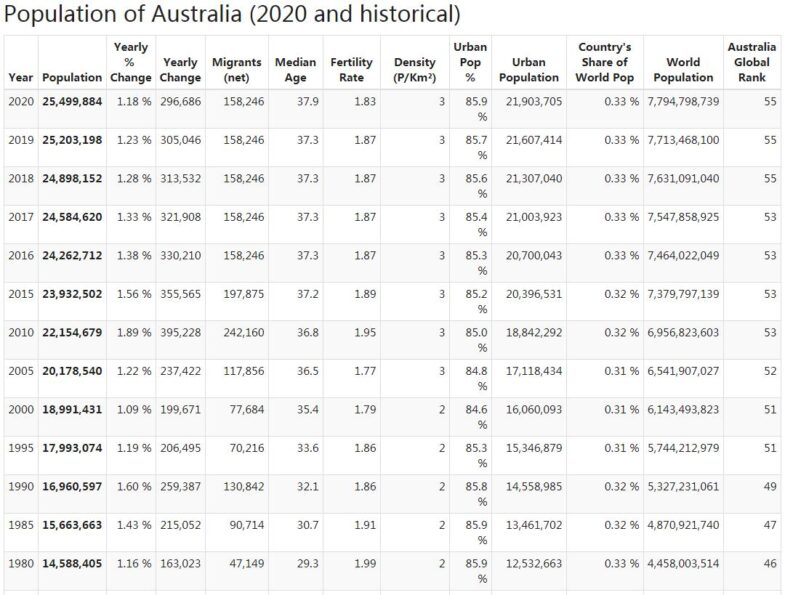 Since the beginning of the 1980s, the labor market has been reformed and liberalized. In 2006, new labor market laws, WorkChoices, were introduced, enabling workers to conclude individual agreements with their employers and give up such things as overtime and holiday allowances. A new Fair Work Act came into force in 2010. This encourages collective agreements rather than individual employment contracts and strengthens the unions’ rights. It also includes a minimum standard for employment and protection against unfair dismissal. In some areas, the states have their own legislation, for example when it comes to workplace safety. There is also a working life ombudsman who can investigate possible violations of labor law.

West Jerusalem is recognized as the capital of Israel

Prime Minister Scott Morrison announces that the government has decided that West Jerusalem should be recognized as the capital of Israel. However, Australia will not currently move the embassy in Tel Aviv.

UN Refugee Commissioner Catherine Stubberfield strongly criticizes how Australia allows migrants to be treated in camps on Nauru and Manus Island in Papua New Guinea. In recent years, the government has been allowed to send boat migrants who have no legal reason to be accepted in Australia to camps in both island nations. Stubberfield believes that the Australian government is ignoring doctors’ recommendations and is thus risking the lives of camp residents, where there is no adequate healthcare. Also part of the country’s medical profession requires that the government, for humanitarian reasons, temporarily receive migrants from Nauru and Manus who are in need of medical care. Children of families must also be allowed to leave the islands, they say.

Landslide victory for Labor in Victoria

The ruling Liberal Party suffers a great loss in the state elections in Victoria. Labor will return to power and will control 55 of the state’s 88 seats. The results are considered by both judges to be bad for the upcoming national elections in May 2019.

Public apology to children who have been abused

Prime Minister Morrison apologizes on behalf of the state to the children who have been sexually abused for many decades. “We failed to help them, we abandoned them and it will always be a shame,” he said in an emotional speech.

The government loses majority in the House of Representatives

In the filling election held after former Prime Minister Malcolm Turnbull left the House of Representatives, Liberal candidate Dave Sharma loses big against popular independent candidate Kerryn Phelps. The government parties thus lose a mandate, and their scarce majority, in the House. The government thus becomes dependent on getting the support of independent MPs to clear the vote in confidence in the House of Representatives.

The refugee camp on Christmas Island closes. Since 2008, the camp has been used by the authorities for refugees who wanted to seek asylum in Australia. To remedy the problem of so many refugees trying to get by boat to Australia, the government began sending boat migrants directly to the Christmas Island facility and refugee camps outside Australian territory in Papua New Guinea and Nauru. The location has been notorious for, among other things, the high suicide statistics among the residents.

Peter Dutton gets support from a majority of Liberal Party MPs for his attempts to force Turnbull to step down. Thus, a new leadership vote is held within the party that Turnbull does not participate in. The election stands between three candidates: Dutton, Treasury Secretary Scott Morrison and Foreign Minister Julie Bishop. Morrison, who is an evangelical Christian and represents a social conservative line, is elected new prime minister with 45 votes to 40 for Dutton. Bishop is voted out in the first round. A few days later she resigns as Foreign Minister.

After Prime Minister Turnbull has been forced into concessions in his climate policy, he himself calls for a vote on who will lead the party and be prime minister. There have been rumors in the media then that Minister of the Interior Peter Dutton plans to challenge Turnbull. A vote is held between Turnbull and Dutton. The Prime Minister wins by 48 votes to 35 for Dutton. The latter resigns shortly afterwards as Minister of the Interior.

Prime Minister Turnbull is forced to put down attempts to enforce a law that Australia will cut its carbon emissions by 26 percent, based on emissions levels in 2005, by 2030. A right wing in his party, led by former Prime Minister Tony Abbott, has threatened to vote no to the bill, which would mean that the law cannot be adopted as the government parties have only a small overweight over the opposition in the House of Representatives. Turnbull chooses to back down so as not to further confront the opponents within the party and risk his position as prime minister. This is a clear defeat for Turnbull and his climate policy, where a law on emissions reduction has been an important part.

Intelligence bodies shall be evaluated

In light of recent reports of foreign involvement in the country, and especially from China, it has been decided that a comprehensive evaluation will be made by Australian intelligence agencies. Above all, it is how the various bodies cooperate, share information with each other and use resources jointly to be investigated.

A Catholic archbishop is found guilty of silencing sexual abuse within the church. The Archbishop, who was a young priest when it all took place, failed to act when he heard about the abuses his clergyman had committed against an altar boy. At the beginning of July, the sentence is set at 12 months’ detention. After Prime Minister Turnbull asked the Pope to kick the Archbishop, he himself submits his resignation application to the Vatican. It is approved by the Pope at the end of July. A court in August decides that the archbishop should be served the sentence at home. The Archbishop appeals against the verdict and in December 2018 he gets the right to a higher instance, where a judge finds that there is no basis for the charge.

The constitutional rule that MPs may not have dual citizenship continues to lead to the resignation of Parliament. After a court decides that a Labor member in the lower house must leave his seat due to dual citizenship, another four MPs, who are being investigated for violating the same rule, choose to resign.

Giant betting will save the Great Barrier Reef

The UNESCO-protected coral reef is threatened by climate change, leading to rising sea temperatures. As a result, the corals are bleached, while fish species that eat the corals benefit from environmental degradation and emissions from agriculture. The Government will now spend over $ 500 million on measures to save the reef.

Australia expels two Russian diplomats following a nerve poisoning attack on a Russian former spy and his daughter in the UK in early March. It is taking place in concerted action with some 20 countries, mainly in the EU, in solidarity with the British government accusing Russia of being behind the attack. In total, over 100 Russian diplomats are expelled, 60 of whom are from the United States. Moscow denies all involvement in the poison attack and threatens with countermeasures.

Australia, together with ten other countries, signs the Free Trade Agreement (CPTPP) (Comprehensive and Progressive Agreement for Trans-Pacific Parthership). The agreement is also called TPP-11 and is a slightly revised version of TPP (see Foreign Trade). The changes are a result of the US withdrawing from the TPP before it came into force. The CPTPP is presented as a counter to the anti-free-trade policy pursued by US President Donald Trump.

Australia and East Timor sign a border agreement after the Permanent Arbitration Tribunal in The Hague has given its view on a dispute over the border demarcation between the countries. According to the agreement, the sea boundary should now go between the countries. The agreement makes it possible to start extracting large gas reserves in the Greater Sunrise field. According to representatives of Australia, East Timor will receive between 70 and 80 percent of the profits from gas extraction.

Barnaby Joyce ends both as party leader for the National Party and as Deputy Prime Minister. It has been revealed that he has a love affair with a former employee who is pregnant. Prime Minister Turnbull says after that it should be prohibited for ministers to have sex with their employees. Among other things, Joyce has been criticized for abusing his position as MP and the whole thing has grown into a major political scandal and a strain on the government. In addition, when Joyce is reported for sexual harassment by a woman, he chooses to resign. A few days later, the National Party appoints Michael McCormack as new party leader and Deputy Prime Minister.

According to the deputy chief of the domestic intelligence organization ASIO, China is categorized as an “extreme threat” on a secret list of threat levels from different countries. The information comes out at a hearing in Parliament in connection with a debate on legislative proposals to tighten the penalty for espionage (see December 2017).

Prime Minister Turnbull presents a new defense strategy that will help the country become one of the world’s ten largest arms exporters within a ten-year period. Companies in the country should be able to apply for government loans in order to strengthen their sales of defense equipment abroad. At the same time, new authorities will be established to coordinate exports and provide advice to companies.

Refugees from camps on Manus are sent to the United States

About 40 men from the closed camp on the island of Manus in Papua New Guinea are put on airplanes to the United States, which has already received about 50 refugees who wanted to make their way to Australia. In February, another 130 people from Nauru refugee camps are expected to be brought to the United States.