The colorful hub of the city is LoDo(Lower Downtown). This part of the city has the highest concentration of Victorian buildings in the country. There are now quaint shops and well over 100 pubs, cafes, restaurants and nightclubs. The baseball team, the Colorado Rockies, plays at Coors Field in the heart of LoDo, framed by classic red brick buildings. A free shuttle bus runs downtown’s pedestrianized 16th Street Mall, past soaring skyscrapers and elegant historic buildings. A great way to get a sense of Denver’s signature mix of new and old is from the grounds of the Capitol. Also worth seeing is the area around Civic Center Park, a garden oasis with statues from the Old West.

A stroll from LoDo is Denver’s bohemian district. The exciting new wing of the Denver Art Museumis the most distinctive and conspicuous building. The outstanding, glass titanium building is also a symbol for the chic new image of the metropolis. This is the first building in the US designed by Daniel Libeskind. The star architect became known through the Jewish Museum in Berlin and won the competition for the reconstruction of the former World Trade Center in New York. The new wing of the museum is near the castle-like main building designed by Italian modernist Gio Ponti. The rooms house one of the most important and largest collections of Native American art, Western classics and works by Picasso and Monet. There are also regularly changing seasonal exhibitions.

Next door is the Clyfford Still Museum , the only museum in the world devoted exclusively to the works of the famous abstract expressionist who died in 1980. The museum was built specifically for his artworks at his request.

The area will soon be complemented by a new building for the Kirkland Museum of Fine & Decorative Art , which has so far been located in a different part of Denver. In addition to the great works of the painter Vance Kirklands, there is also a huge collection of artistically significant furnishings from Art Nouveau to Pop Art and Bauhaus to admire in the Kirkland Museum. The museum is currently closed and will open in autumn 2017.

Nearby is the majestic Denver Library , designed by British master Michael Graves. Across the street is the modern History Colorado Center . It provides a fascinating and playful look at the state’s mining, cowboy and Native American history. Children in particular can try out, touch and experiment a lot here and thus playfully explore the region.

According to Transporthint, the Black American West Museum is dedicated to the history of black cowboys. In fact, one-third of cowboys were black at large cattle drives. Mostly these were slaves who were freed after the civil war. The best way to get to the museum is by tram.

Denver’s streetcar is one of the most innovative public transit systems in the United States. The route network is currently around 300 km long and connects the city with the suburbs and also includes the airport. Denver Airport (DEN) is another symbol of the city’s bold vision. In terms of area, it is the second largest in the world and the largest in the United States. The focus is on the dynamic terminal building with its white, pointed tent roof battlements, which reflect the glowing gold of the mountains in the distance and are intended to be reminiscent of Indian tents but also of the peaks of the Rockies.

The Historic Union Station in Lower Downtown was completely renovated and reopened in 2014 for its 100th anniversary. Within a very short time, the restaurants, bars, pubs and cafés that are now located here have become the trendiest hotspots in Denver’s nightlife. In addition, a chic boutique hotel has been created within the historic walls of the station with the Crawford Hotel. Union Station is and remains the transportation hub in the heart of Denver. Amtrak trains to Chicago and San Francisco depart daily from here. Denver International Airport is a 25-minute commuter train ride from Union Station. The free 16th Street Mall Shuttle also stops right outside Union Station.

With 200 parks and 17 boulevards, Denver is one of the greenest cities in the United States. Incidentally, some of Denver’s districts are also interesting for tourists – and by the way, can now be easily reached by tram. Highlands is an eclectic borough that has become known for its arts and crafts. The SoCo neighborhood (South of Colfax) has hip bars, the Santa Fe Arts District has galleries and Mexican restaurants, and the Littleton and Arvada neighborhoods have a nice suburban feel. The hip RiNo district is particularly popular at the moment(River North), which borders downtown to the north. For a long time, RiNo was a predominantly fallow industrial and warehouse district. Only in recent years has it increasingly become an attraction for young, creative people, who have settled more and more galleries, boutiques, urban restaurant concepts and breweries on the relatively inexpensive plots of land. They made RiNo one of Denver’s hottest spots.

Nights in Denver are characterized by a rich offer of entertainment options. The 11,000-seat Denver Performing Arts Complex is both an opera house and concert hall, home to a theater company and symphony orchestra, a stage for Broadway guest performances, and a venue for contemporary dance and ballet performances. Theaters also include the restored Ellie Caulkins Opera House , one of nine houses worldwide to feature seatback multilingual translation monitors. Rock concerts take place at the Pepsi Center, the Fillmore Auditorium or of course the magnificent and legendary Red Rocks Amphitheater in the mountains above the city. 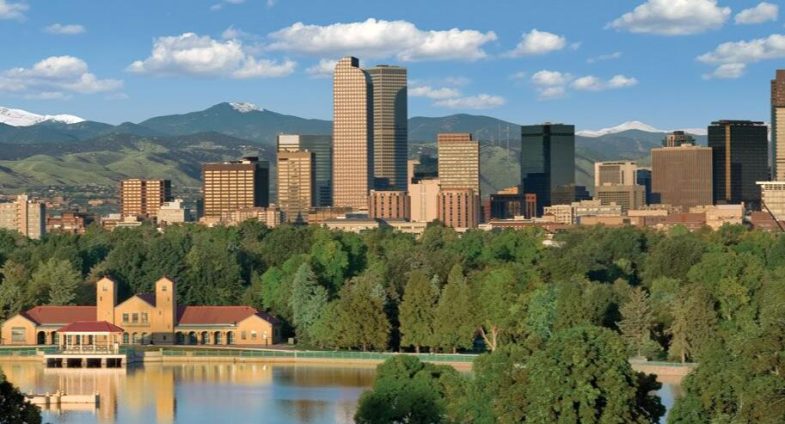