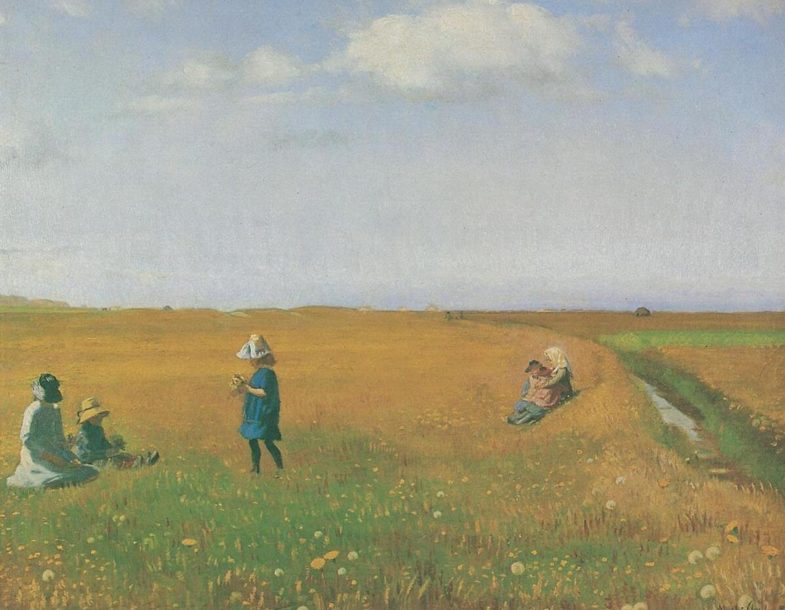 The pioneers of Nordic outdoor painting, the Skagen painters, met from the 1870s in Skagen, attracted by the intense light over the land strip between the Skagerrak and the Kattegat. Michael Ancher’s painting Children and young girls picking flowers in a field north of Skagen, 1887, shows the French influence on the painting art of the time. 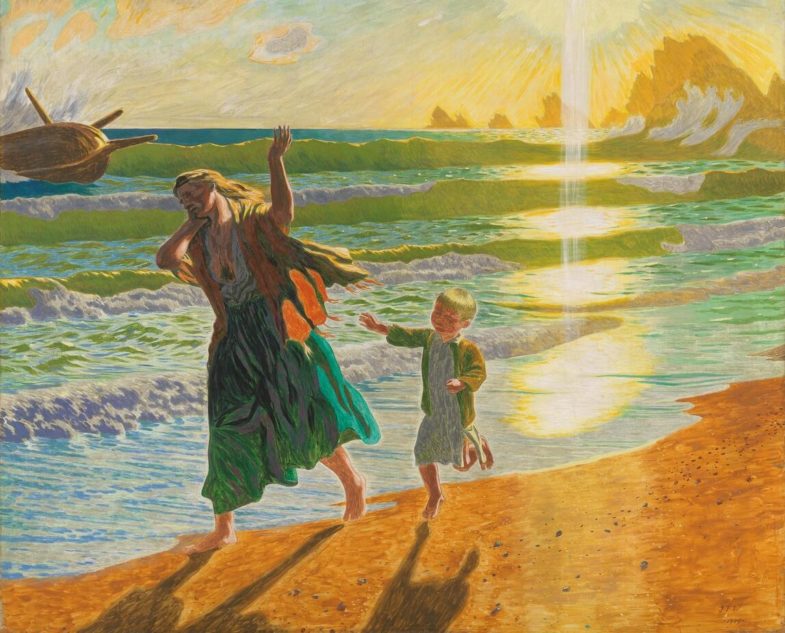 Jens F. Willumsen’s light-ecstatic and highly personal, symbolic paintings form a transition to expressionism. One of his main works is After the Storm, 1905. 155.5 x 150 cm. National Gallery, Oslo.

The romance is naturally expressed in painting, which in Denmark, however, is not appreciably characterized by Düsseldorf, but grows on a domestic basis, strongly stimulated by the art historian Høyen’s constant emphasis on national value in the visual arts.

In the 1870s, the Eckersberg School was solidified in an academic formalism. A renewal occurred around 1880 when Laurits Tuxen and Peder Severin Krøyer returned home after their apprenticeship at Bonnat in Paris. The goal now was to portray reality through an outdoor painting in bright tones. At Skagen, Krøyer, Michael and Anna Ancher, Viggo Johansen and others met with Norwegian ( Christian Krohg ) and Swedish artists, and here the new realistic folk painting was created.

Hans Schmidt and Niels Bjerre painted Jutland farmers and Laurits Andersen Ring the Zealanders. Inspired by French Impressionism, Theodor Philipsen painted his colorfully exquisite landscapes and animal pictures. Kristian Zahrtmann continued the history painting. However, he became of the greatest importance as a teacher (1885-1908) for a large number of Danish and Norwegian painters.

In the sculpture, Vilhelm Bissen and August Saabye go through all the development from classicism to naturalism. As an alternative to the official Charlottenborg exhibition, the young artists themselves organized from 1891 the Free Exhibition.

The 1890s were marked by the reaction to the sober depiction of reality, when symbolism (neo-romanticism) in its quest to create a style of art with a stronger mood and expressiveness turned to the Middle Ages and the Italian Hungarian, English prerafaelism and Gauguin.

The most radical preacher of the new style ideals was Jens Ferdinand Willumsen ; as a painter and graphic artist, sculptor, potter and architect he always sought the suggestive and dynamic in line and color. Highly marked by Italian primitivism is Poul Christiansen in his Dante compositions, gloomier and stricter Ejnar Nielsen.

A popular, thoroughly religiously colored religiousness is noticed both by Christiansen, the brothers Niels and Joakim Skovgaard and the last pupil Niels Larsen Stevns. Joakim Skovgaard’s frescoes in Viborg Cathedral (1901–13) and Larsen Stevns’ in the Hans Christian Andersen Memorial Hall in Odense are major works in Danish decorative art.

Near the Skovgaard circle are the Fynboers Fritz Syberg, Peter Hansen and Johannes Larsen, who intimately describe nature, people and wildlife on their home island. A refined, colorfully subdued mood art cultivates Julius Paulsen in his landscapes and women’s acts and Vilhelm Hammershøi in his interiors.

In the sculpture, Niels Hansen-Jacobsen is characteristic of the symbolic tendencies of the time, while Anne Marie Carl-Nielsen continues the naturalistic tradition in her animal sculptures. Well-known monuments from this period are Anders Bundgaard’s Gefionspringvann (1908) and Edvard Eriksen’s Little Mermaid (1913), both at Langelinie in Copenhagen. Painters such as Willumsen, brothers Skovgaard and Philipsen also worked as sculptors and potters; In this connection, an original decorative gift such as Thorvald Bindesbøll must be mentioned. 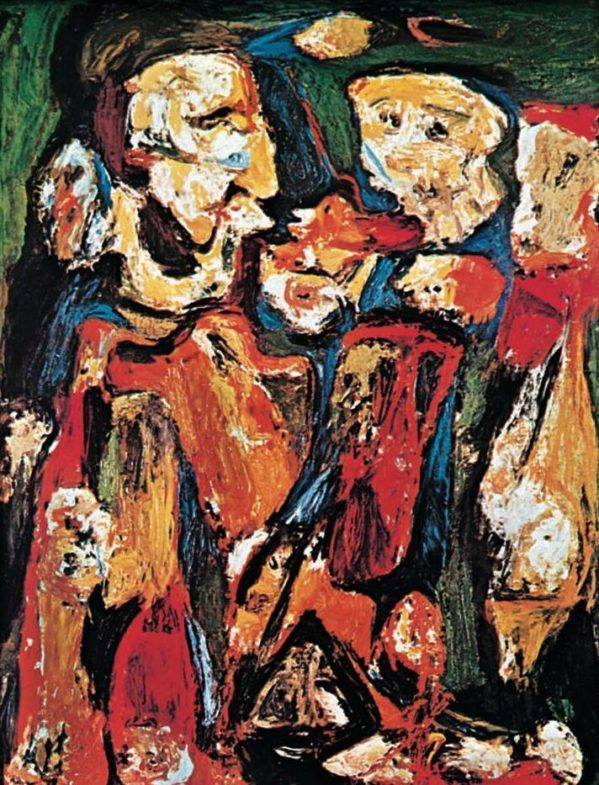 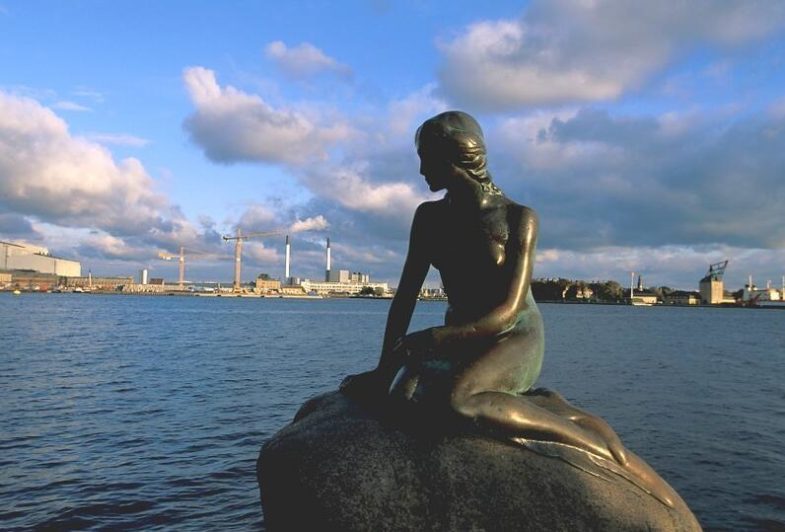 The Little Mermaid at Langelinie in Copenhagen, performed in 1913 by sculptor Edvard Eriksen with dancer Ellen Price as model.

Most of these painters joined in 1915 together in the group Grønningen, and in the journal Klingen (1917–20) Giersing, Salto, Rude and others fought for the new ideas. Hit also heard the strongly cubist-influenced Vilhelm Lundstrøm, who caused outrage with his “pack-box pictures”. More isolated, however, stood the strict constructivist and theorist Georg Jacobsen, who exerted a strong influence on the Norwegian art environment while he was an academy professor in Oslo in the years before World War II.

Around 1930 a group of Danish surrealists formed in close contact with the Swedish Halmstad group. Vilhelm Bjerke-Petersen had studied at Bauhaus Dessau and in 1934 founded the group Linien, which became a center for abstract art and surrealism. Wilhelm Freddie’s works were perceived as provocative, blasphemous and pornographic, and scandals surrounded his exhibits. The rebellion against the “depictive” art was continued by painters such as Richard Mortensen, Carl-Henning Pedersen, Asger Jorn, Ejler Bille,Else Alfelt, Franciska Clausen and Egill Jacobsen, and sculptors such as Robert Jacobsen, Henry Heerup and Erik Thommessen, almost all members of the international artist group COBRA.

One of the foremost sculptors in the early 1900s is Kai Nielsen, who in his sculptures unites a lush sensualism with a sense of whole and closed form. Closely related to him is Gerhard Henning, while at Einar Utzon-Frank we find a graceful, sometimes somewhat mannered slenderness reminiscent of early Greek art. Axel Poulsen has performed a number of major monumental tasks. Adam Fischer and Astrid Noack represent a crisp and condensed style with strong emphasis on volume. Jørgen Gudmundsen-Holmgreen and the animal sculptors Mogens Bøggild and Hugo Liisberghas worked in a naturalistic form language. Finally, the imaginative Henrik Starcke should be mentioned, and Knud Nellemose with his interest in sports motifs. Sonja Ferlov Mancoba has built her abstract sculptures on simple form elements.

Artist associations have stimulated Danish 20th century art. Social Democracy’s dream of art for the many, has forced artists to think in large formats, such as Paul Gernes at The Experimental School of Art, opened in 1961, in their geometric surfaces of pure, strong colors. To unleash a creative ability on the part of the spectator more than to show his own individuality, Aagaard Andersen has succeeded in his monumentalized Interferences (1972) for Fredericia railway station. In his large sculptures, Kasper Heiberg is based on elements in the surroundings. To break the dividing line between different art expressions, Per Kirkeby has used fragments of trivial art in his paintings, and created works consisting of visual art, written statements and films, where everything is connected.