A number of finds from the Stone Age in Denmark give certain impressions of the art that has been created during this time. Animal figures of amber and some sketchy pictures carved on objects of bones and horns show that hunters of old stone age, 4000-5000 BCE, had the ability to create both images and sculpture. In the younger Stone Age, both art and ornamentation became richer. In particular, in the so-called funnel cup culture, high quality ceramics were created, richly decorated with geometric ornamentation. Besides, it was built large and somewhat complicated burial buildings, lulling and passage graves, which must be described as the oldest monumental architecture in Northern Europe. 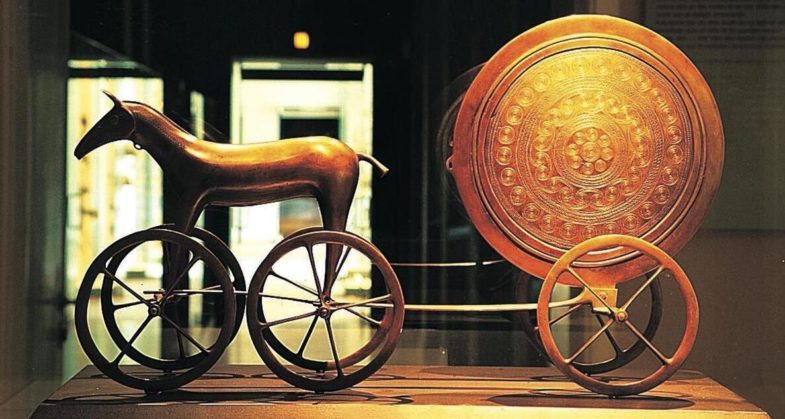 The trolley from Trundholm bog, Zealand, one of Denmark’s best known prehistoric finds. It consists of a bronze miniature horse pulling a gold plated disc. This “sun disk” is decorated with a spiral ornament that dates it to the middle of the older Bronze Age, ca. 1200 BC National Museum, Copenhagen.

During this time, casting based on bronze is developed almost to perfection. Objects like weapons and jewelry are finely crafted and richly ornamented. The Bronze Age style shows a developmental process that makes it possible to divide it into separate phases. In the older Bronze Age, the spiral ornament is the dominant one and is known for example from the Solvanen from Trundholm. In the younger Bronze Age, the wave band style dominates. The Bronze Age art in Denmark is characterized by strong cultural contacts with southern and southwestern areas, but it is still very independent. In the rock carvings one encounters the circuitry as the dominant motif. Stylized ship figures and human representations are also common in this art. 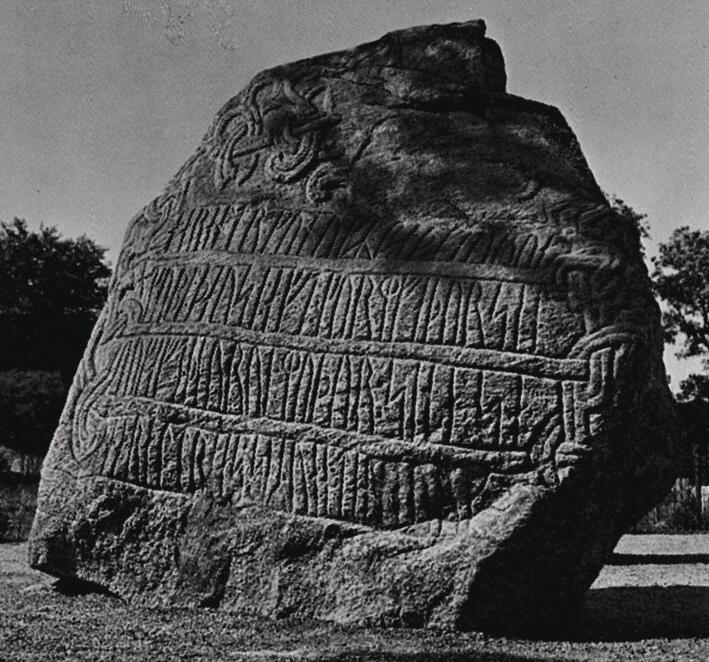 The largest Jelling stone from East Jutland, one of the most famous Danish rune stones from the younger Iron Age. It is 2.5 meters high, three-sided and decorated in Mammen style. This page shows a Christ figure surrounded by ribbon wraps, the earliest known image making of Christ in Denmark. The rune inscriptions are on the wide side.

The cases of pre-Roman Iron Age (500 BCE – year 0) are mainly imported, for example Dejbjergvragen and Gundestrupkjelen. They give the impression that Denmark was in good contact with the rich Celtic art world in the south of Europe.

In Roman times (to 400 AD), Roman import pieces dominate in a similar way. In some cases, the objects were copied and transformed according to Nordic style and taste. This is especially true of Roman medallions that were transformed into gold rush theater.

The migration period (400–570) is characterized by animal ornamentation. The animal motifs first appear on import items that were sometimes equipped with barbaric, non-Roman elements. Gradually, the animal motifs also appeared on Nordic objects. Sösdala style is two-dimensional and a typical flat style with elements of various animal motifs. The style is named after a rich find from Skåne. In the early 400s, the Nydam style grew, named after a sacrificial finding from Nydam bog in Schleswig. The style is three-dimensional and uses deep relief(carving) as a means of creating light-shadow interaction. Spiral ornaments and animal figures are the hallmark of the style. Salin’s style I, which appears in the latter half of the 400s, represents the fully developed animal style. It is characterized by a myriad of non-figurative animal figures.

In the younger Germanic Iron Age (570-800), the style changed to Salin’s style II, characterized by animal figures that are connected organically according to the principle of composition from the ribbon braiding ornaments.

The styles of the Viking Age (800–1050) have been named after famous finds. The oldest is the Oseberg style, where the gripping animal is a characteristic motif. The Oseberg style is followed by the Borrest style, which got its name from a collection of smaller bronze harness fittings from the ship’s tomb at Borre. The joint motif is a so-called ring chain besides various kinds of animals. The Jelling style has been named from a small silver beaker found in the burial chamber in the north mound of Jelling. The cup is decorated with a circular frieze where the motif is two S-shaped band animals. The mother style has been named after a grave near Viborg. The style contains both purely Nordic elements and impulses from continental art. What’s new is the feature of the plant ornament. Narrow ranged shoots arranged in groups and large four-footed animals are characteristic of the subsequent Ringer’s style. The center for the design of the style has probably been located in Denmark, where there has been close contact with church centers in both Germany and England.