During the 1990s, many industries in Armenia were forced to close. Unemployment rose sharply and many Armenians, mainly men, applied abroad, including to Russia. Others tried to manage their livelihood in the recently privatized agriculture.

In the wake of the international economic crisis of 2008–2009, almost 21 percent of unemployment was recorded in 2011. A recovery in the economy has taken place ever since.

Officially, 2017 saw an unemployment rate of about 17 percent. It was an average, which contained large regional differences. In fact, according to the statistics authority, 25 percent were unemployed in the cities, compared to just under 8 percent in the countryside. The figures fell slightly in 2018.

The statistics have for many years been regarded as unreliable, but the latest figures are close to the level that the UN agency ILO considers to be real. One explanation may be that many previously did not find it worthwhile to register as a job seeker.

For those who find work, wages are low. Many employees are believed to declare too low wages to avoid paying taxes.

In 2018, 33 percent of Armenians were active in agriculture, according to the ILO. But there is a significant informal sector, not least in agriculture, which is largely done in small units and as family farms. The UN organization FAO has noted that it is often women’s work that in this way remains unpaid and income is not recorded as theirs.

Russia is the country that receives the most Armenian guest workers. Transfers from Armenians working abroad make up a tenth of the country’s GDP. 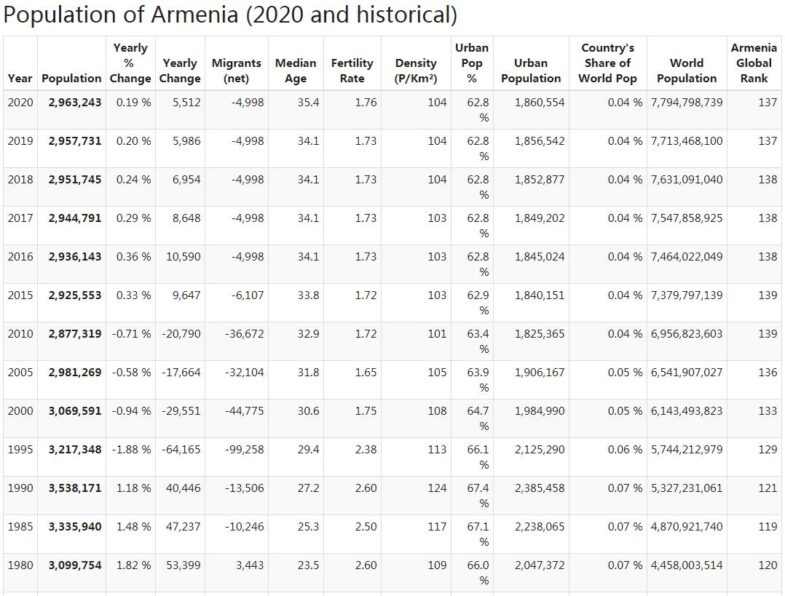 Armenians have a legal right to join free and independent trade unions, with the exception of those serving in the defense or police and most public servants. In practice, there is very little chance of making demands through the unions. The official national organization of the Armenian Trade Union Federation is a remnant from the Soviet society and about as toothless as it was then. In reality, most employers oppose the unions, do not agree to collective wage negotiations and are not late to dismiss strikes. Salary issues are usually decided directly between the employer and the employee, with the result that wages are kept down. Men usually have much higher wages than women.

In principle, child labor is prohibited for up to 16 years, but from the age of 14 children can work with the permission of the parent or guardian. Children often participate in agricultural work and street sales.

The EU promises support to countries in the east

Representatives of the EU and six former Soviet republics meet in Brussels. The EU promises deeper cooperation with Ukraine, Belarus, Moldova, Georgia, Armenia and Azerbaijan. The EU does not place a view on membership of the Union, on the other hand, help fight corruption, strengthen the rule of law and modernize the countries’ economy.

The government wants to expand teaching in Russian, which is already compulsory, in Armenian schools. The issue is disputed; Russian has been widespread since the Soviet era, but many would rather have more English teaching.

In Turkey, Osman Kavala is arrested on secret charges. He leads the Anatolian Culture organization, which has international contacts and has tried to get in touch with Armenia as well. The question is sensitive since the events of the Second World War when the Armenians consider them to be genocide.

Trial begins against opposition leader Andreas Ghukasyan. He was arrested in connection with the large protests in Yerevan a year earlier, when a police station was occupied and protesters demanded the president’s resignation. Several activists are still threatened by legal consequences for participating in the protests.

The human rights organization Human Rights Watch (HRW) criticized the Armenian government for the way the police respond to the demonstrators who took part in mass protests summer of 2016. According to HRW, the police used violence against the protests were mainly peaceful.

In the breaking-out republic of Nagorno-Karabakh, Parliament’s 33 members elect Baho Sahakyan as leader for one to three years. In surrounding Azerbaijan, the vote is described as “yet another provocation from the Armenian side”.

Civilian casualties at the enclave

An Azerbaijani woman and her two-year-old grandson have been shot dead from Armenian territory, Azerbaijan claims. The incident near the Nagorno-Karabakh breakaway republic is followed a few days later by Azerbaijani artillery fire against Armenian positions.

The Armenian-backed separatists in the enclave of Nagorno-Karabakh said that three separatists have been killed by the Azerbaijani army.

President Sargzyan’s Republican Party concludes an agreement on government cooperation with Dasjnak. Although the Republican Party has more than half of the seats in Parliament after the April election, it has not had a sufficient majority to be able to set a number of high posts and enforce certain laws, such as changes to the electoral system, referendums or the Constitutional Court’s activities. This requires a three-quarters majority, which the government now receives with a two-mandate margin. Dasjnak was also part of the previous government.

The ruling party wins the election

The ruling Republican party wins the parliamentary election with just over 49 percent of the vote. A Alliance dominated by the party A successful Armenia gets just over 27 percent. Valalliansen Vägen ut and the party Dasjnak pass the five percent block with around seven percent of the votes each. The turnout is just over 60 percent. The OSCE observers say that the elections were largely well organized and that citizens’ basic freedoms were respected but that credible reports of voting, pressure on officials and voters were intimidated to vote on certain parties. According to the OSCE, this leads to a lack of confidence in the electoral process in the public. Several opposition parties say they have filed complaints against election fraud to the prosecutor’s office.

On April 2, the first parliamentary elections have been held since the constitution was amended to give Parliament greater political power than the president. The opposition fears that President Sargsyan, who resigns in 2018, intends to try to retain power by continuing to have a firm grip on the Republican Party. The ruling party is primarily challenged by an alliance led by the party A Successful Armenia, led by businessman Gagik Tsarukyan. The opposition has warned against electoral fraud on the part of the government and during the election day there will soon be reports of violations of the voting secret and people who have been voted several times. In a joint statement before the election, the EU delegation and the US embassy expressed their concern over data on “threats to voters, attempts to vote and systematic use of administrative resources to favor certain parties”.

Several Azerbaijani soldiers are killed in fighting on the Nagorno-Karabakh frontline. The information is confirmed by the Azerbaijan and Armenian defense ministries, as well as by the leadership of the rebels in the outbreak state. On the other hand, the information goes as usual about who started the fighting.