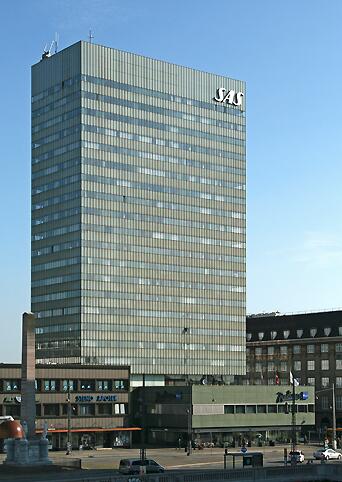 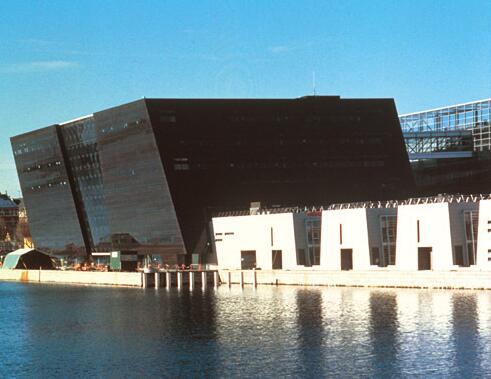 Newly built for the Royal Library in Copenhagen, The Black Diamond, which was inaugurated in 1999.

The reaction to 19th century historicism was first ushered in by the Copenhagen City Hall (1892-1905) designed by Martin Nyrop. Anton Sofus Rosen is regarded as the most prominent representative of the Art Nouveau in Denmark. His design delight is well demonstrated in the town hall’s neighboring Palace Hotel (1907-10) with its eye-catching tower. At the same time, Peder Vilhelm Jensen-Klint formulated his demand for simplicity, regional style and material awareness. These views were manifested in the Grundtvig Church, built 1921-40.

Jensen-Klint’s views were partly formulated in opposition to Carl Petersen’s Faaborg museum (1912–15) and the duo of Hack Kampmann and Aage Rafn, who together designed the Copenhagen police station (1918–24) under the strong influence of CF Hansen’s classicism.

A distinctive feature of Danish architecture is the ability to absorb and modify the attitudes of the changing international currents. The country’s only then architecture school, with its 200-year history, was firmly rooted in the craft tradition that required austerity in the tools, simple, finished building bodies with regular window placement and modest details. Therefore, the breakthrough of functionalism did not become the all-encompassing renewal as in other European countries. We see this clearly in the University of Aarhus (1935–85), designed by Kay Otto Fisker, Povl Stegmann and CF Møller. The way the first building bodies were laid in the terrain shows, along with some details of the ideas of functionalism, but the use of yellow brick and traditional roofing makes the plant more regional than internationally functionalist. An example of functionalism in a more pure form can be found in the Radiohuset in Copenhagen (1934), designed by Vilhelm Lauritzen.

Arne Jacobsen’s first works are characterized by classicism, while in later housing projects he returned to the Danish yellow tile and canopy in a design clearly influenced by anonymous Mediterranean architecture. By contrast, the Town Hall in Rødovre (1955) and the SAS Hotel in Copenhagen (1959) have American-style models, especially the works of Mies van der Rohe. This influence is also evident in the Louisiana Art Museum in Humlebæk (1958), designed by Jørgen Bo and Vilhelm Wohlert.

At the same time, Jørn Utzon had distinguished himself with his organically inspired architecture. In 1957 Utzon won the international competition for a new opera house in Sydney. The project showed large shell-shaped structures hovering over a large plateau reached via wide, slender stairs. The preconditions for this major work of modern architecture found Utzon in the anonymous architecture of North Africa, Mexico, China and Japan.

In a subdued form, brutalism has its representatives first and foremost in the architects Knud Friis and Elmar Moltke Nielsen. with the Scanticon course center at Aarhus (1969) connected to a common Nordic, more than just Danish, tradition.

Parallel to brutalism, a structuralist direction emerged, mainly dealing with major building programs. The ideas were realized on a large scale first in Odense University (competition in 1967) designed by Knud Holscher. Henning Larsen pursued the idea of ​​the house as a city in the university center at Dragvoll in Trondheim (1978), with the incorporation and air-conditioning of distribution streets between the different parts of the university.

An expansive housing policy in the 1950s and 1960s gave rise to the rise of housing complexes that, in a way, realized the planning ideals of modernism with housing slats standing freely in landscape settings, with the Hoge Gladsaxe outside Copenhagen as the most typical example.

In the 1970s, the ideal was to build small, varied and flexible, in a way that took into account landscape and vegetation, and by preserving existing buildings rather than demolishing and redeveloping. The result was so-called low, low-rise buildings, which throughout the 1970s and 1980s became almost unanimous. The buildings were now divided into smaller groups, together with their own communal houses for the residents ‘social activities, and the individual dwellings could be built and changed as the residents’ space requirements changed as changes in the family’s composition. The residential area Tinggården (1978), designed by Tegnestuen Vandkunsten, appears as an intermediary between city and country, with a striving self-expression and popular architectural expression.

Danish architects have had a number of major assignments abroad, especially in Arab countries, where the Danish ideals of sobriety and order seem to harmonize with original values ​​in the indigenous communities. Henning Larsen has signed the Ministry of Foreign Affairs in Riyadh, Saudi Arabia (1980-84), and the architectural firm Dissing + Weitling, which was established in 1971 as a continuation of Arne Jacobsen’s architectural office, is behind new construction for the central banks both in Kuwait (1973-76) and in Iraq (1981–85). They demonstrated their ability to unite function and aesthetics in the Kunstsammlung Nordrhein-Westfalen in Düsseldorf (1981–86), an assignment they received after winning in a prestigious international competition.

Next to Utzon’s Sydney Opera House is Johan Otto von Spreckelsen’s victory in the competition for Tête Défense: L’Arche de la Défense, a cubic-shaped triumphal arch at the end of Paris’s historical axis, completed to the two-hundredth anniversary of the French Revolution in 1989, a of the greatest triumphs for Danish architects abroad.

The postmodern tendencies in Western architecture did not have a major impact in Denmark. Danish small-house construction, on the other hand, has been characterized by a return to original Danish virtues; a connection to the natural-bound simple, with easy-to-understand building bodies with scarce detail, steep eaves and small windows, and a careful experimentation with the use of solar energy. This tendency can be termed as an attempt to further develop what has been called Nordic modernism. In recent years, several large, modern cultural building projects have shown that Danish contemporary architecture claims very well internationally. Such buildings include the Arken Museum of Modern Art (opened in 1996) at Ishøj near Køge Bay, 20 km south of Copenhagen, designed by Søren Robert Lund, the Royal Library’s new building at Slotsholmen, The Black Diamond. 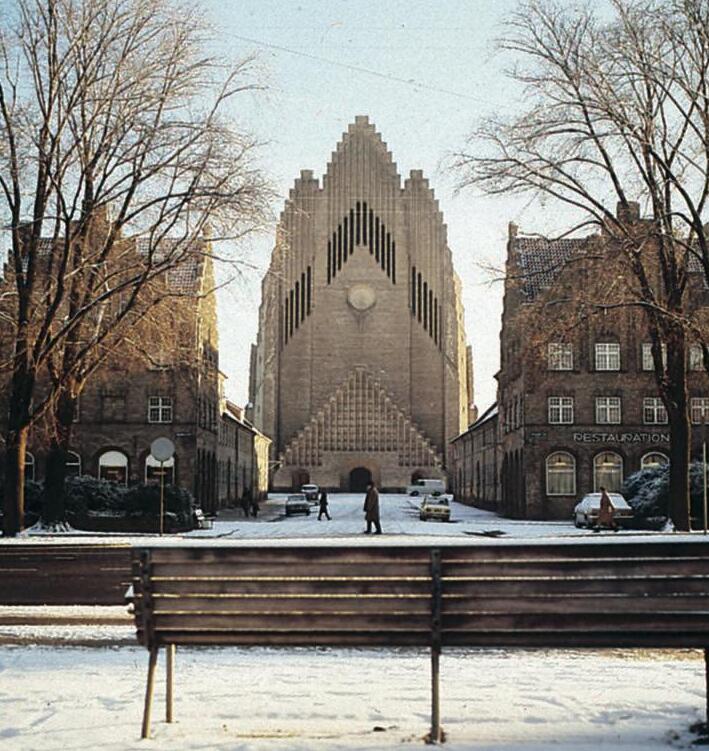 One of the most distinctive buildings in recent Danish architecture is Jensen-Klint’s Grundtvig Church at Bispebjerg in Copenhagen, built 1921-40.