From the younger Stone Age, ca. 3300–1500 BC, the remains of two long houses with a load-bearing construction of earthen posts, probably with walls of braided branches and clay, have been found in Barkær on the east coast of Jutland. The buildings are dated to approx. 2500 BC Of more monumental plants from the period are the many nozzles and trenches in the form of earth and stone structures. Bronze Age, ca. 1500–500 BC, has left no trace of significance after settlement. However, as architectural monuments, one must count the many dome-shaped burial mounds along the old ruin roads at the Limfjord and the coast of northwest Zealand.

With the climate change in the Iron Age, approx. 500 BC – 800 AD, people were forced to build more solid homes and keep domestic animals indoors during the winter. On the basis of archaeological finds, it has been possible to reconstruct examples of the period’s buildings with walls of peat or rows of earthen posts with fillings of branches and clay and roofing of peat or straw.

From the Viking Age, ca. 800-1050, there are traces of large military facilities. Most famous is Trelleborg in Zealand. The plant is designed with circular ramparts that surround regularly placed buildings where earthen posts have formed the supporting structure. One of the buildings has been experimentally reconstructed. The plant also belonged to the Danish defense plant Danevirke, ca. 800, along the southern border.

House with half-timbered houses on Samsø. 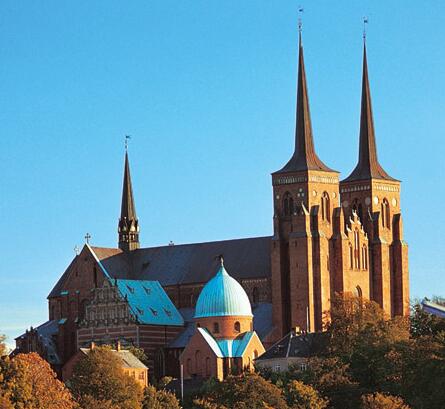 Roskilde Cathedral is Denmark’s most important building from the Middle Ages. It was begun in Romanesque style and completed during Gothic. Most Danish kings and queens are buried here.

The first church buildings were wooden churches with earthen posts. The first known stone church was erected in Roskilde in the 1000s, but it was only after 1100 that most of the Romanesque churches were erected. Between approx. 1100 and 1250 it was erected near 1800 churches. The impulses for church building came essentially from Germany. About 1100, cathedrals in Ribe and Viborg were started within the current Danish area. A central monument from Roman times is Our Lady Church in Kalundborg. Towards the end of the 12th century, brick became the most common material for larger buildings and facilities.

In the 15th century, the German hall church type came to Denmark. used at the lavittinian monastery in Maribo in Lolland. The oldest Danish monasteries were built in Roman times, but most were built in the 1300s-1400s. The Carmelite monastery in Helsingør (1400s) is the Nordic region’s best-preserved monastery.

Bricks were also used in defense facilities. The southern border’s old ramp was expanded with scattered fortresses and the main trade routes were fortified. In the first part of the Middle Ages, the castles often consisted of a palisade or ring wall with a central tower building. The Goose Tower in Vordingborg (1300s) is a late example of such a facility. Increased use of cannons in the late Middle Ages necessitated thicker walls or earth walls.

The first cities grew during the Middle Ages. The settlement was similar to the one that characterized the countryside with various forms of timber where oak was the most important wood material. An important step forward came when one learned to place the supporting pillars on stones or a reclining sleep. Around the year 1500, the first half-timbered houses came on two floors. At the same time, it was started to wall out the wall surfaces between the timber frame with bricks and to lay bricks on the roofs. In some cities, walled dwellings were also erected. In i.a. Examples of late medieval brick houses have been preserved in Helsingør and Kalundborg. The strategically most important cities were fortified with ramparts. The city gate in Stege on Møn (1400s) is the remnant of a larger facility. 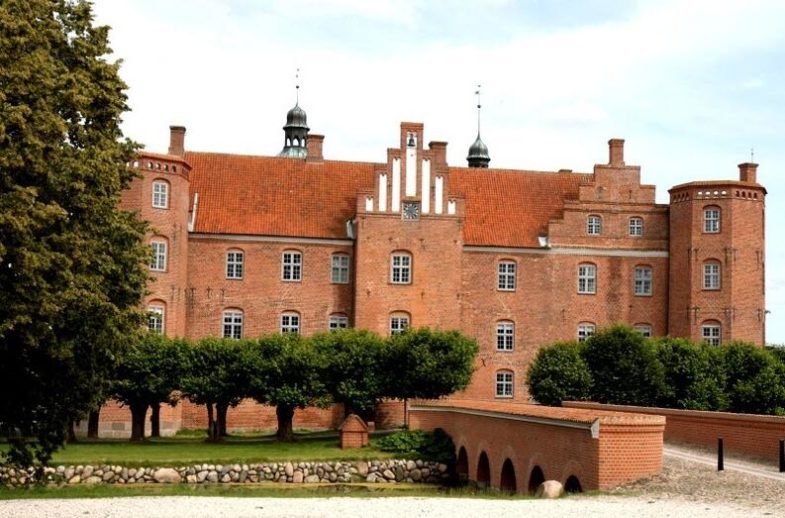 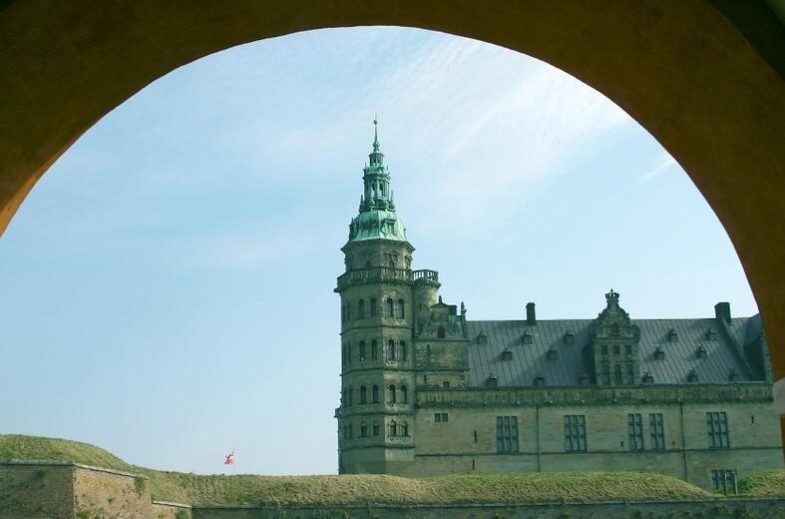 Kronborg Castle and Fortress in Helsingør. The original Kronborg was built in 1574–85, under Frederik 2. His current appearance in the Dutch Renaissance style got the castle 1629–37 after the old castle was destroyed by fire. 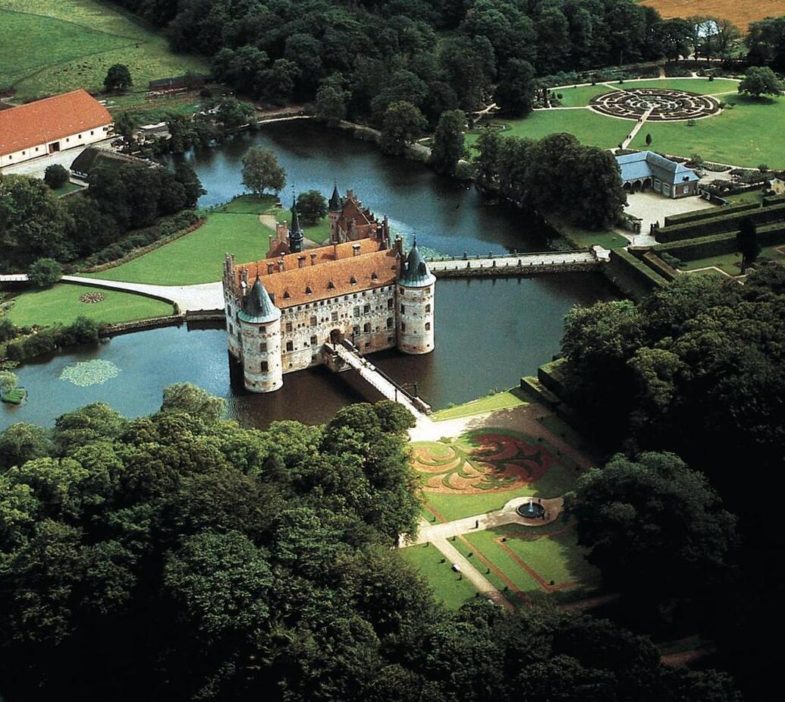 Landscape with Egeskov castle, northwest of Svendborg on Funen. The castle, which stands on oak piles framed in the sea, is a well-preserved water castle, built 1524–54.

As an expression of the noble position, after the Reformation manor houses were built all over Denmark, often with a certain defensive character. Preserved noble seats from the 16th century include Rygård and Egeskov on Funen. Historically, these plants belong to the Renaissance, which in Denmark came to last for approx. 1660. The most important building material was brick. Frederick 2 was the first to consciously use the architecture to emphasize the king’s power. In 1575–85 he built Kronborg Castle where the important Øresundtoll was collected. Several Dutch architects contributed to the design of the four-leaf plant, which is externally clad with sandstone. Inside, the Hall of Knights has been standing as Denmark’s foremost Renaissance interior.

Christian 4 had a number of facilities built by Dutch-inspired Renaissance. Most famous is the Rosenborg Castle in Copenhagen (1606–34). To the University of Copenhagen, the king had the Trinitatis church erected with the characteristic Round Tower (1637–56). From the reign of Christian 4 is also the current stock exchange building in Copenhagen (1619–25). However, by far the largest part of the settlement was still built in half-timbered technology. The towns of Ribe in Jutland and Køge in Zealand are particularly rich in half-timbered houses from the Renaissance era.