The vast majority of Angolans try to earn their living in the informal sector of the country’s economy, both in the countryside and in the cities. Most of those who have a formal employment work on larger farms. About a fifth of the formal workforce works in industry, primarily in construction work, or in the public sector.

The oil industry provides employment for less than one percent of the economically active population. During the post-war reconstruction (1975–2002), more than half of the oil sector’s workforce was Chinese. The Angolan workforce is poorly educated and has a lack of professional experience due to the war.

In the late 1950s, a union central organization, the União Nacional de Trabalhadores Angolanos (UNTA), was formed under the MPLA’s one-party government (see Modern history) was the only one allowed. UNTA, which, with around 215,000 members, mainly organizes government employees in Luanda, is today divided between those who want to keep the ties to the MPLA government and those who want to be politically unbound. Already in 1996, several unions had left UNTA and formed the competing Central Geral de Sindicatos Independêntes e Livres de Angola (CGSILA), a major step forward for democratic freedom and rights in Angola. CGSILA, with more than 50,000 members, has sought to maintain an independent position vis-à-vis political power. A third central organization is Central Sindical Angolana (CSA), which resided in the Congo-Kinshasa during the war.

The union business has grown since the end of the civil war, but it is still small. MPLA’s social dominance is strong and union rights are limited. There are also not many large workplaces. Despite this, strikes and other trade unions occur. Among other things, UNTA has worked to raise the minimum wage significantly and to regulate working conditions for household employees. 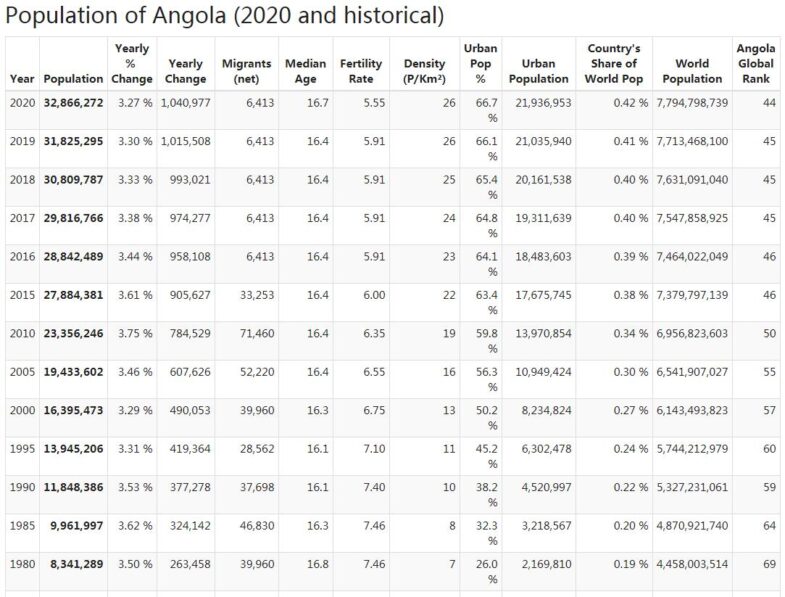 It is common for children to help raise money for the family; there are estimated to be almost half a million child workers (10-14 years) in Angola. Street children also exist, but not to the same extent as before, and the authorities are aware of the problem.

The start-up shot goes for Angola and the French energy company Total’s big project to extract oil from a new area in the sea, 25 kilometers outside the capital Luanda. The project is the largest investment in Angola’s history and the hope is that the production supplement will revitalize the country’s economy that has been in crisis since the price of oil crash in 2014. Two old oil tankers will serve as oil platforms and pump oil from six sources on the seabed. The area concerned corresponds to the size of Paris. The oil will then be transported to the mainland through a three-mile long pipeline.

Step towards better relations with Portugal

Portuguese government head António Costa visits Angola. After years of irritation in the contacts, the countries now want to normalize their relationship and a number of cooperation agreements are signed at the meeting between Costa and President Lourenço in the capital Luanda. The agreements should, among other things, facilitate mutual investment in the countries. They also include a settlement of Angolan debt to Portuguese companies. A first step towards better relations was taken in May 2018 when a Portuguese court gave the green light for a move of the trial against former Angolan Vice President Manuel Vicente from Lisbon to Luanda. Vicente stands accused of corruption and Angola has demanded that he be investigated in his home country.

President João Lourenço is appointed new leader of the MPLA government after José Eduardo dos Santos, who has dominated Angolan politics for nearly 40 years. Some analysts believe that as long as dos Santos has remained at the party leader’s post, Lourenço has proceeded more cautiously with the reform policy than he otherwise would have done.

After a week in custody, 13 activists are released from the Cabinda enclave who were arrested when they tried to organize a public debate on Cabinda’s status. The activists are members of a group that wants to give Cabinda independence in dialogue with the Luanda government. They were accused of threatening the security of the state but pointing to the court that they informed the authorities about the meeting and even invited the governor of Cabinda to the debate. The court goes along the lines of the activists and states that the meeting was held within the law’s raw marks.

It knew journalist Rafael Marques and a colleague were acquitted by a court. The journalists were facing charges accused of insulting former Prosecutor General João Maria de Sousa when they wrote in an article that de Sousa had been involved in an illegal land deal. The court dismisses the prosecution. The judges note that the land deal was surrounded by irregularities and that the journalists only did their job when they informed the public about the incident. The rash is welcomed by human rights activists. Zeinada Machado of Human Rights Watch says she hopes this will mean a new era where journalists can work freely in Angola. Marques has been arrested a number of times for his writings.

A Portuguese court ruled that the trial of former Angolan Vice President Manuel Vicente, who was charged with attempting to bribe the Portuguese prosecutor (see January 2018), may be moved to Angola. Portuguese President Marcelo Rebelo de Sousa says he hopes this will lead to better relations between Portugal and Angola. The Angolan government has accused Portugal of violating Angola’s sovereignty through the legal process.

The army chief gets fired

President João Lourenço dismisses the head of the country’s armed forces, Geraldo Sachipengo Nunda, who is considered by prosecutors to be involved in an international fraud involving $ 50 billion. The head of the country’s intelligence service is also dismissed. A few months later, in September 2018, the indictment against Nunda is closed due to “lack of evidence”.

A unanimous parliament adopts a new law that is expected to make it easier for foreign companies to establish themselves in Angola. Previously, foreign companies had to merge with domestic companies. Now that requirement is abolished as well as a rule that required an investment to exceed EUR 180,000.

The ex-president’s son is being prosecuted

José Filomeno dos Santos, son of the country’s longtime leader José Eduardo dos Santos, is being prosecuted for fraud. The indictment concerns a $ 500 million withdrawal from the country’s central bank. The money was taken out of the country but was blocked in an account in the UK after British authorities made suspicions about the transaction. Former Central Bank Governor Valter Filipe da Silva is also being prosecuted.

Angola is one of 44 countries to sign a Free Trade Agreement at the African Union Summit in Rwanda. The agreement must be ratified at the national level before the AFCFTA free trade area can become a reality, but it is seen as a historically important step towards increased trade exchange within Africa.

A small government hostile protest is being held in the capital Luanda. The participants object to a law that was adopted in February, which means that people with assets abroad can collect sums up to the equivalent of EUR 81,000 without having to account for where the money comes from. Only ten people take part in the protest, but it gets noticed because the fact that it takes place means a new era. The organizers have been given permission by the authorities to carry out the campaign, which would have been unthinkable during former President Josè Eduardo dos Santos’s time in power, writes AFP news agency. João Lourenço, who took over as president in the fall of 2017, has motivated the new law by being able to counter corruption and help increase investment in the country.

A trial that has created tensions between Portugal and Angola will start in Lisbon. The prosecution is based on suspicions that, against Angola’s former Vice President Manuel Vicente, he has bribed the Portuguese State Prosecutor for two charges of money laundering . Vicente is not in court. Angola is pressing for the case against Vicente to be transferred to his home country, but the prosecutor says no as it means that the legal process against him will be closed down, as Vicente is subject to an amnesty that the former Angolan President dos Santos issued in 2017.

President João Lourenço retires José Filomeno dos Santos as head of the state investment fund, where the revenues from the country’s oil resources are collected. Dos Santos is suspected of having emptied the fund of large sums. He is replaced as Fund Manager by former Finance Minister Carlos Alberto Lopes.