High Population growth has contributed to high unemployment and underemployment in Algeria. In the 1990s, the situation was aggravated by the industry’s market adaptation when large state companies dismissed a large proportion of their staff. Formal unemployment was close to 30 percent in 2000, but has remained around 10–11 percent since 2008.

However, among young people, approximately one in four individuals are estimated to be unemployed. The lack of work causes many Algerians to apply abroad. In addition, several international organizations believe that the real unemployment rate is significantly higher than the official figures show. Many support themselves in the informal “black” sector as street traders, maids or day laborers.

Of those who have formal employment, about 10 percent work in agriculture, 30 percent in industry and the rest in the service sector.

The right to unionize is constitutional. After the start of democratization in 1989, a number of independent trade unions were formed, including the influential teacher union. Previously, only the regime-affiliated country organization UGTA (Union générale des travailleurs algériens) was allowed. With the democratization, the UGTA declared political independence, but the organization has been criticized for standing too close to the government and not being loyal enough to the workers.

Strikes are legal and occur relatively often. Doctors and teachers were striking for higher wages in 2018. Prior to the 2019 presidential election, when the country’s president was aiming for a fifth term, a strike and protest wave were triggered both against the regime’s imperfection and against precarious economic conditions. Lawyers and university teachers were among the professional groups that pushed the president to withdraw from the elections and the government circle to show a will for reform. 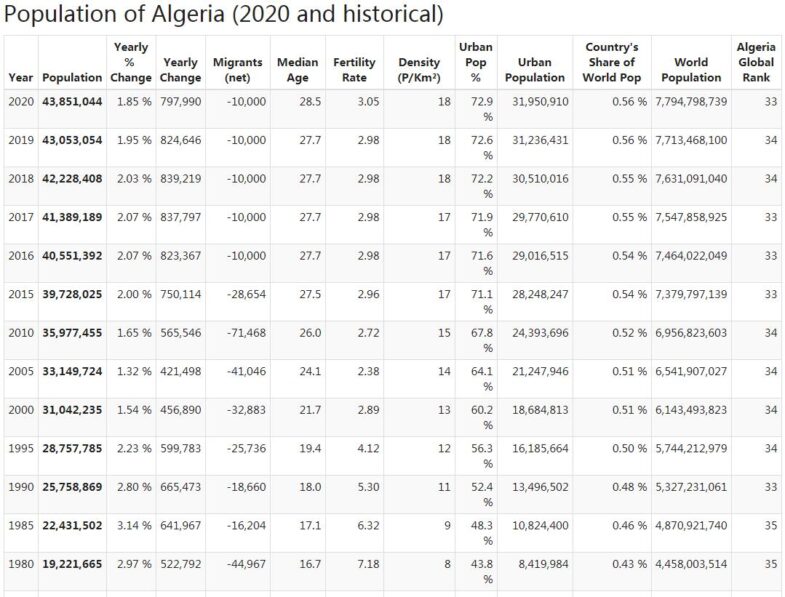 French supreme leader of the al-Qaeda terror network in Islamic Maghreb (Aqim) has been killed by French soldiers, says French Defense Minister Florence Parly. Algerian Abdelmalek Droukdel was killed in northern Mali near the border with Algeria along with several other Aqim leaders. According to Parly, one of the leaders of the Islamic State in Greater Sahara (ISGS) was also arrested in May. Several hundred suspected terrorists have been captured or killed in the region during the past year by French troops, French media reports.

Ferry in traffic to France again

From Alger, the first car and passenger ferry leaves to France since the borders were closed on March 19; The trip to Marseille takes almost a day. On board, there are thousands of people trapped in Algeria when the covid-19 pandemic triggered restrictions. Many are tourists, others are linked to both countries. More ferry departures are planned. In recent days, flights between countries have also been conducted to take travelers home; Recently, only seven flights per week have been maintained between Algiers and Paris. European motorhomes trapped in Algeria will be able to return via ferry to Malaga, with Spanish special permission.

TV documentaries about the protest movement in Algeria annoy the government so much that the country’s ambassador is called home from France for consultations. The documentaries, which have been broadcast on French public service television, are not expressions of freedom of expression but in fact “attacks on the Algerian people and its institutions”, the Ministry of the Interior claims. In particular, the government is agitated by a documentary made by French scholar Mustapha Kessous, who portrayed the Hirak protest movement by interviewing young Algerians. In April, France’s ambassador to the Foreign Ministry was called to Algeria for comments on how China’s corona aid to Algeria was reproduced in French media.

Army strike against terrorist hideout in the northeast

The army detects ten underground hideouts and weapons used by groups with suspected links to the al-Qaeda terror network in Maghreb (Aqim). In fact, operations such as this in northeastern Algeria often occur, judging by the army’s own tasks: 130 hiding places were revealed and 50 jihadists were arrested during the first four months of the year. In the north and northeast, the army seems to succeed in isolating cells by jihadists. Arms seizures do indicate that militant groups are engaged in smuggling across borders further south, but both Aqim and IS are believed to prioritize areas other than Algeria: Aqim has established itself in the Sahel region and IS is deemed to be more interested in strengthening its presence in Libya and Tunisia.

This year’s state budget is halved, President Tebbone’s office announces. The reason is that the global race of oil prices and the corona pandemic dramatically reduces state revenues. Despite this, the government has decided to raise the minimum wage from 18,000 to 20,000 dinars a month. The new minimum wage does not fully correspond to SEK 1,400. At the same time, the income tax is abolished for anyone earning less than 30,000 dinars a month.

The Algerian Penal Code is being expanded with a ban on “fake news” which is deemed to undermine the state’s security or public order, and the question is how the ban will be used. After a year of protest when demonstrations were tolerated to a greater extent than regime critics feared, the new rulers are reported to have reduced the scope for both mass media and protesters.

Opec member countries and several non-member oil producing states (Russia, Mexico and Kazakhstan) agree to reduce their production by a total of 9.7 million barrels per day to raise crude oil prices. The decrease corresponds to almost a tenth of world production, but it is still uncertain if they succeed in their ambitions to get more paid for the oil. The severe restrictions imposed by the world’s countries to counter the corona pandemic have caused global demand to collapse, for example on aviation fuel. With low demand for crude oil and low prices, the Algerian state loses important revenue.

Yet another of the leaders of the past year’s protest movement is sentenced to one year in prison. In connection with Abdelouahab Fersaoui, who is leading a youth movement, his sentence states that a support organization for imprisoned Algerians will hold a total of 44 activists linked to the broad protest movement Hirak.

An Air Algérie plane lands in Algiers with a medical team of 13 people and on-board care equipment. The equipment is described as a donation from a state-owned Chinese engineering company to help Algeria take care of patients who have covid-19 disease. Algeria, with about 130 confirmed deaths, has ordered, among other things, 100 million face masks and 30,000 test kits from China. The patients may also come to a large extent from China: the country will build a health center for 5,000 Algerians and 4,000 Chinese who are employed by the engineering company CSCEC.

Grace, but not for protesters

President Tebboune pardons more than 5,000 prisoners. But the measure does not include activists in the last year’s major protest movement. In a statement the following day, backed by Reporters Without Borders (RSF) and Algerian human rights organizations, the government is accused of exploiting the corona crisis to avenge its opponents and independent journalists. One of the people the organizations want to see released is Khaled Drareni, who works for the RSF, and a correspondent for Lebanese TV. Drareni has several times when he followed the protests of Hirak’s protests.

Karim Tebbou, one of the leaders in the popular protest wave that started in February 2019, is sentenced to one year in prison. The judiciary’s handling of his case provokes reactions. According to the judgment of an appellate court , he has pleaded guilty to rioting and threats to national security. On March 11, it was stated that he would be sentenced to six months imprisonment (already served, see September 19, 2019) and a further six months conditional (and thus released). Instead, his defender was called to court for a hearing that ended the sentence one year, unconditionally.

Mass meetings are prohibited in the light of coronary infection

All forms of mass meetings and demonstrations are prohibited, for any purpose. In a televised speech, the president refers to the need to stop the spread of coronavirus. Officially, Algeria has 60 confirmed illness cases and five patients have died.

Fodil Boumala, TV journalist and key figure in the Hirak protest movement, which has been pushing for political reform for over a year, is acquitted in court. He has been prosecuted for undermining Algeria’s territorial integrity, a charge that could result in ten years in prison, and for having spread publications that could jeopardize national interests. Prosecutors had requested a year in prison for him (see September 19, 2019).

On February 22, will be Algeria’s new national holiday, according to the decree of the president. This day marks the anniversary of the wave of protests that began in 2019 and led to former President Bouteflika being ousted from power. But the state “gives with one hand and brings with the other”: the days after the new national day, a number of activists are sentenced to fines or imprisonment of between three months and one year for participating in the regime-critical wave of protest.

Crisis plan is adopted in the upper house

The Government’s action plan to tackle the country’s economic and political crisis is approved by the National Council, the upper house of parliament. The plan is in five chapters, which include reform of the electoral law. Prime Minister Djerad has also announced changes to the Finance Act adopted by the previous interim minister.

Grace, but not for regime critics

President Abdelmadjid Tebboune pardons 6,300 prisoners who have less than one and a half years left of their sentences. Two days earlier, he has made similar decisions involving almost 3,500 prisoners. People convicted of terrorism, treason, espionage or corruption cannot have their sentences reduced, it says. A support group for prisoners, CNLD in French Abbreviation, points out that the decisions do not include 142 arrested members of the Hirak protest movement who are being held in custody. Hirak is called the movement that has been demonstrating against Algeria’s political elite for a year.

The government decides on a number of measures to reduce road deaths. There will be more speed controls and a mapping of road sections that need to be improved. The message comes two weeks after a bus crash in the east where twelve people die and 46 are injured. The day after the government decision, seven people were killed and 25 injured when a bus collapses near Annaba. In 2019, road accidents claimed 3,275 lives and more than 30,000 people were injured, according to Algerian traffic authorities.

Experts should work on constitutional reform

President Tebboune appoints an expert committee to propose constitutional amendments. He thus fulfills one of his election promises. The committee will consist of lawyers from the academic world. The proposals drawn up by the experts shall be submitted to Parliament and thereafter a referendum shall be held on them.

Lakhdar Bouregaâ, the veteran of the liberation war against the French, is one of about 75 arrests that are set free. When the veteran was arrested six months earlier, he had ventured into open criticism against Army chief Gaïd Salah (see June 29, 2019). Among the others who are released, according to Algerian press, there are a number of activists in the protest movement Hirak. For Bouregaâ still awaits a trial that has been postponed for the future.

Algeria’s new government is presented. The list of ministers shows that the Hirak protest movement has received scant hearing for its demands for renewal: eleven ministers have either been members of the previous government or have been ministers already under former President Bouteflika. Sabri Boukadoum continues as Foreign Minister (appointed before Bouteflika’s departure in April). By tradition, the President is Minister of Defense and there is now no Deputy Minister of Defense, a post previously held by the mighty Army Chief Gaïd Salah who recently passed away. Kamel Beldjoud becomes Minister of the Interior and thus gets a key role in how authorities respond to protesters. Two deputy ministers are given responsibility for investments in small businesses, which is perceived as a gesture towards the protest movement. The government will take office on January 4.