Unemployment in Albania is high, although it has fallen from the sky-high levels in the early 1990s. The right to organize a trade union is enshrined in the constitution, but in reality trade union activity is problematic.

The transition to a market economy during the 1990s led to a rapid rise in unemployment. At most, it was around 25 percent. The lack of supply opportunities led to mass emigration, mainly to Greece and Italy. About a million people are estimated to have left Albania for over a decade. Nearly a third of the workforce was abroad in the 2000s.

As a result, Albania is in short supply of highly skilled, skilled workers. Many returnees face problems of bureaucracy and corruption that make it difficult for them to enter the labor market.

Official unemployment has been around 13–17 percent since the end of the first decade of the 2000s. However, the actual unemployment rate can be significantly higher, since many work – or are underemployed – in activities without official transparency. The employment rate is also officially relatively low. Only about half of the working-age population is estimated to be part of the workforce. More than four fifths of the workforce is found in the private sector.

The degree of connection to the compartment above law is low. It is mainly in the industry that there are active unions. Most are affiliated with the national organizations Albanian Independent Trade Unions (BSPSh) and Albanian Trade Unions (KSSh). Both are officially independent from the political parties, but in reality, KSSh is close to the Socialist Party, while BSPSh cooperates with the Democratic Party. The contradictions are harsh between the two national organizations.

Many companies are strongly opposed to the unions and do not agree on collective wage negotiations. Trade union activists risk dismissal and working conditions at especially the textile and shoe factories are often very poor. Since inspections are rarely done, the company management is not pressed to make any improvements. Legal disputes over violations of labor law often take many years and many do not dare to join the union. 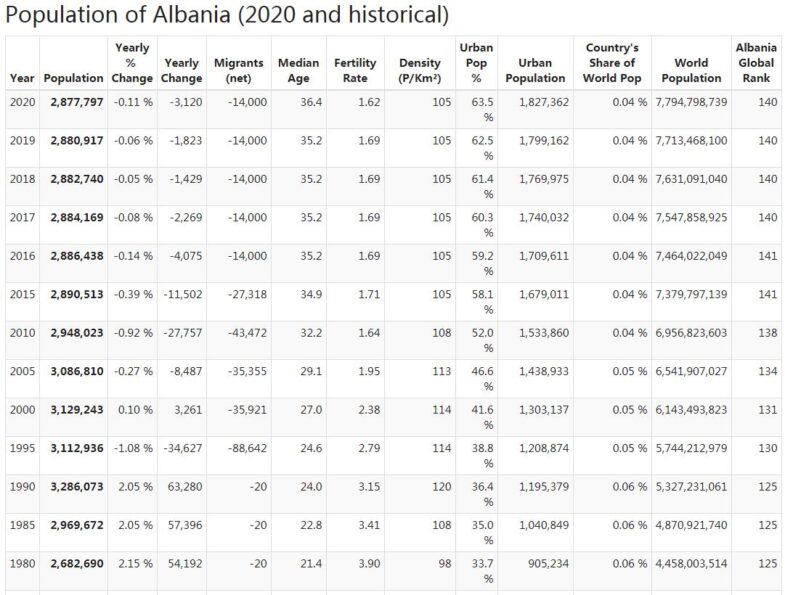 Albanian law allows children from the age of 15 to perform “light” work when they are free from school. It seems that children are also used for work that can be both heavy and dangerous, often in the informal sector but also in construction and factories.

Finally, the EU provides the long-awaited clear sign for Albania, and Northern Macedonia, to start membership negotiations with the Union. There is no start date and the ongoing corona pandemic means that it may take a while before the talks get underway, perhaps until autumn 2020. A few weeks earlier, the European Commission has taken a thumbs-up, stating that both countries have sufficiently strengthened their democratic institutions and delivered more ” concrete and sustainable results ”. The European Commission has long advocated membership negotiations with Northern Macedonia and Albania, but the process came on patrol when, above all, France demanded more reforms and a changed enlargement process in the EU (see October 2019).

Curfew because of corona

A curfew is introduced for most of the day to try to stop the spread of the new corona virus. It is allowed to stay on foot outdoors only for a total of six hours, to get to and from work and grocery stores. Vehicle traffic restrictions were introduced at the beginning of the week. The number of coronary cases in the country is still low.

Restrictions due to the corona virus

The government decides to close schools and ban public gatherings, including sporting events, after the first two cases have been detected by the coronavirus that causes the covid-19 disease. All flights have also been placed between Albania and northern Italy, which is the worst hit country in the world after China. Just under a week later, the government fines up to € 83,000 for those who violate regulations that have been added to stop the spread of infection.

The European Commission is again giving thumbs up for Albania and Northern Macedonia to be allowed to start membership negotiations with the Union. According to the Commission, both countries have sufficiently strengthened their democratic institutions and delivered more “concrete and sustainable results”. Albania is being praised for judicial reform, including the scrutiny of judges and prosecutors, and the fight against corruption and crime – particularly in the field of cannabis cultivation and smuggling of narcotic drugs. The European Commission has long advocated membership negotiations with Albania and Northern Macedonia, but the process came on patrol when, above all, France demanded more reforms and a changed enlargement process in the EU (see October 2019).

New protest against the Prime Minister

Thousands of opposition supporters participate in a demonstration against Prime Minister Edi Rama and his government. The demonstration has been announced by President Ilir Meta, who accuses Rama of trying to take control of the judiciary by directing the nomination of judges to the Constitutional Court. Opposition leader Llulzim Basha urges people to “defend the constitution”. Around 1,000 police officers have been deployed and surround the Prime Minister’s Office, which is also protected by the fence. During protests that started in early 2019, attempts were made to storm the building.

Billions are promised for reconstruction

Foreign donors pledge EUR 1.15 billion to help rebuild after the severe earthquake in November 2019. Prime Minister Edi Rama says the amount is more he dared to hope in his “wildest imagination” and more than twice the government’s expectation and even higher than the estimated cost. The money comes mainly from the EU and international bodies such as the UN and the World Bank, but Turkey and the United Arab Emirates, among others, also contribute.

Large costs after the earthquake

The earthquake that shook Albania in November 2019 caused damage to € 985 million and has adversely affected the economy, according to official data. The forecast for growth has been adjusted down from 3.5 percent to 3.2 percent.